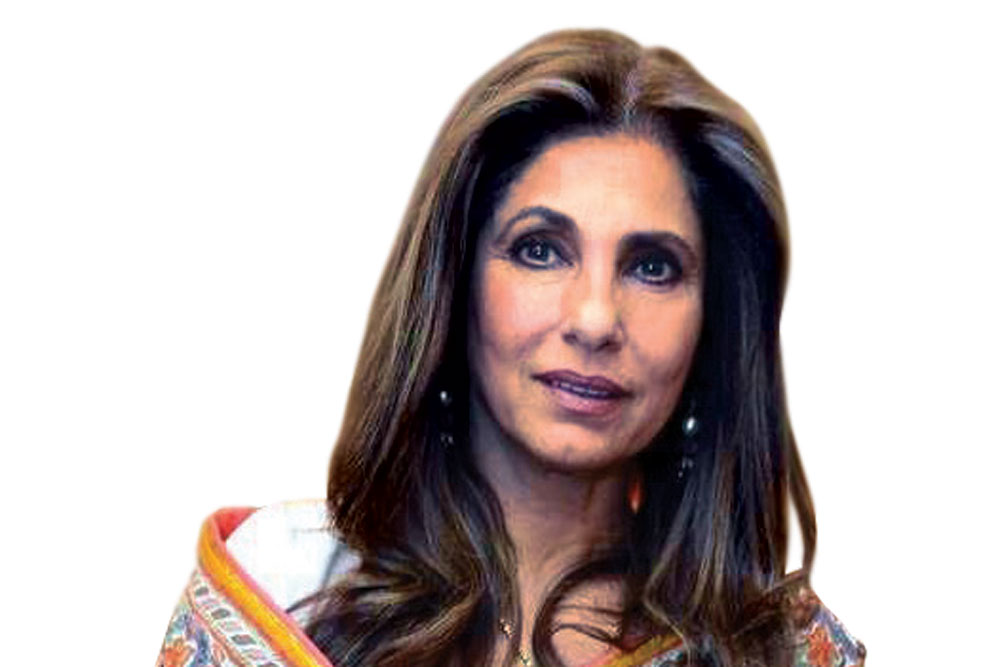 
Being Cyrus, Finding Fanny and Cocktail director Homi Adajania can’t think of making of a movie without Dimple Kapadia. They have a true friendship that feels nothing like director and actor, and Homi has frequently said that although she seldom shows it, Dimple is as happy to work with him as he is to direct her. “She’d definitely be pissed if I wrote a film and didn’t have a role for her,” he says, not
half-jokingly.

So when he decided to make Angrezi Medium with Irrfan Khan, he naturally carved out a role for his lucky mascot. Homi has said he made the call to Dimple telling her it was a small role but worthy of her, that they’d be shooting in London, and that he wouldn’t work her so hard that she wouldn’t have time to visit the casinos that she loves so much. She didn’t take too long to say yes.

But she did call him up some days later to say he ought to narrate the role to her. She insisted, in fact, that he drop everything and visit her the same afternoon. He went along, surprised that she was asking for a narration. She never had previously. When he turned up and sat down to explain the film and her role in it, Homi realised he hadn’t been summoned for a narration. She had, in fact, tricked him into showing up, then dumped a camera in his hands, and got him to shoot her screen test for Christopher Nolan’s film Tenet that she subsequently went on to land.

As far as the role in Angrezi Medium is concerned, turns out she needed no convincing at all. She learnt her lines, showed up on set, and reminded Homi that he could always count on her as a competent actor and as a generous friend.

So it’s settled. Ayushmann Khurrana has finally zeroed in on his next film. The actor, who’s been on a roll for nearly three years now, took a break after completing Shubh Mangal Zyada Saavdhan and Shoojit Sircar’s Gulabo Sitabo at the end of last year. He decided he’d been working too hard and needed to spend time with the family and needed to focus on his music before he returned to the sets again.

Over the last few months Ayushmann has been going through a pile of scripts. There has been considerable curiosity within the industry over what he will choose to do next. So remember you read it here first—it is now clear that Ayushmann’s next project will be another film with his Article 15 director Anubhav Sinha. Little is known about this movie except that it’s titled Anek, and that it’s a highly political drama. Also, that Ayushmann will begin shooting in April.

After an A-lister, who was in advanced talks to star in a film by a top commercial director, left the project at the eleventh hour, the filmmaker approached a superstar to step in. Very reliable sources say the superstar displayed the same behaviour that had cost him another major project only months ago.

The superstar in question asked for the film’s title to be changed. He also said the script needed to be altered in a way that only three other actors would play his siblings and not six, as in the director’s draft of the script. He insisted that he would pick the other three actors. One would be his brother-in-law, a small-time actor, the other two were actors he’d launched and who’d been unequivocally rejected by the audience in their respective previous films.

The director was not excited by the superstar’s demands. He also wanted to have a say in the music. The final straw, however, came when the film’s producer, a top filmmaker himself, called in one of the younger actors that the superstar had recommended, for a screen test. The cocky fellow asked the producer for a script before he was ready to commit to the film. That was it. The producer and the director decided there was no way they were going to put up with the tantrums of the superstar…and his posse of B-listers. They decided they’d rather not make the movie with him than make a version of the movie that was severely compromised.