The Indian Dirty Harrys in Khaki 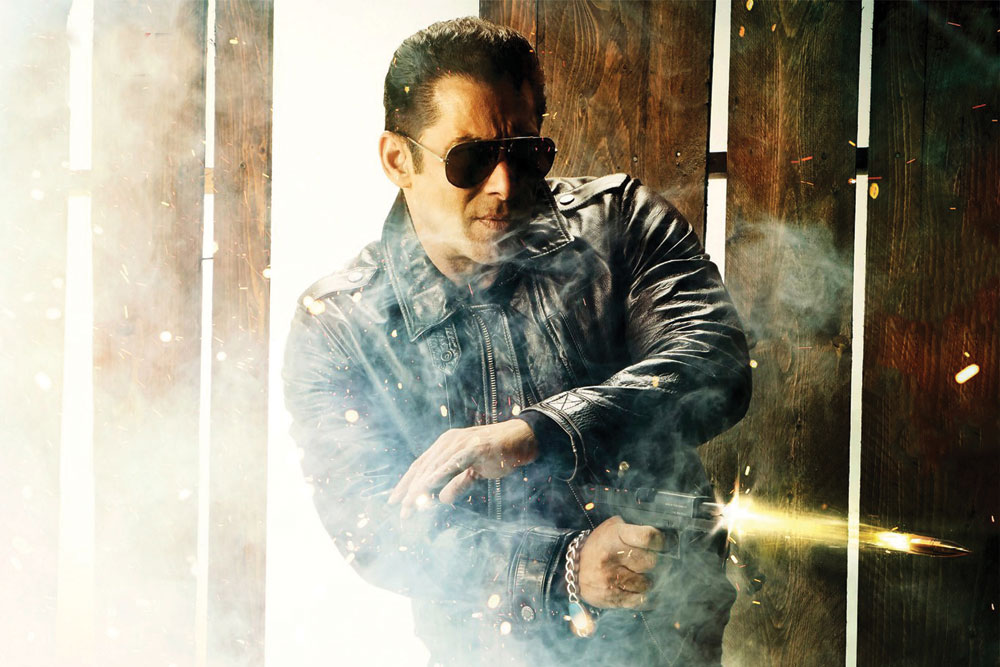 Salman Khan in Radhe: Your Most Wanted Bhai


All action movies have braggadocio-infused dialogue. But a Bollywood cop movie doesn’t stop at physically improbable feats of strength. It goes beyond this brief and imbues the scene with aggressive innuendo.

Just recently, we had Salman Khan’s Radhe: Your Most Wanted Bhai, directed by Prabhu Deva (which released on Zee5 on a pay-per-view basis), a sequel-in-spirit to the duo’s 2009 collaboration Wanted. In both films, Khan plays Radhe, a super cop with nearly limitless abilities and a devil-may-care attitude. At one point in Radhe, Khan makes the following cringe-brag before a group of bad guys he’s about to bash up: “Abhi toh sirf teen inch ghusaaya hai, agar ab koi aage badha toh uske bladder ki jagah phephdaa hogaa aur liver ki jagah kidney. (I’ve put just three inches [of my knife] inside until now. If anybody makes a move his liver will be replaced with a kidney and his lungs will be stuffed where his bladder is supposed to be).”

Radhe is the latest in what has become a full-fledged ‘cop franchise industrial complex’ for Bollywood. Every major star seems to have a cop franchise of their own. Ajay Devgn has Rohit Shetty’s Singham (2011) and Singham Returns (2014), remakes of the Tamil-language Singam franchise starring Suriya. Shetty also made a spinoff called Simmba (2018) (starring Ranveer Singh as the titular cop) where Devgn provides the narra­tor’s voiceover and makes a cameo in the climactic fight sequence. Shetty has now declared that these three films are part of his ‘Cop Universe’ (nomenclature inspired by the Marvel Cinematic Uni­verse), as is his upcoming release Soorya­vanshi (the release has been delayed by a year now, thanks to the pandemic) which stars Akshay Kumar and features Devgn and Singh in cameos, a desi cop version of the Avengers.


All these films are different in terms of tone and content but they share con­siderable thematic ground. The first and the most obvious common ground is these cops’ penchant for ‘encounters’ ie extra-judicial killing. Every film named above features multiple examples. In Radhe, Khan’s titular character boasts about completing 90-plus ‘encounters’, an allusive one-up on Nana Patekar’s cop protagonist from 2004’s Ab Tak Chhappan (literally ‘56 So Far’ in Hindi) who had notched up 56. Rani Muk­erji ends both of her Mardaani films by exhorting groups of young (underage, in fact) girls to mob-lynch the bad guys— the bloodlust is given moral ballast by the fact that in Mardaani, the villain is a sex trafficker while in Mardaani 2 it’s a downright psychopathic teenage rapist.

These killings are often given explic­itly religious sanction: both of Mukerji’s mob-lynch episodes feature a rap-rock track called ‘Mardaani Anthem’, where the Durga Saptashati is part of the lyrics. The Saptashati, of course, is a series of versified tales of the goddess Durga’s triumphs over various demons. In Dabangg, Khan’s Chulbul Pandey righteously proclaims himself “kaminon ke devta” (the God of scoundrels) before finishing off the villain in a typically gruesome moment, using a tractor’s exhaust pipe to asphyxiate him.

But the most in-your-face example is, of course, the Singham franchise, which is littered with the Shaivite references that are so close to Devgn’s heart (the actor, a Shaivite himself, sports a Shiva tattoo on his chest). Singham emerges bare-chested out of a river at the begin­ning of the movie, hands joined in prayer — in fact, the series takes pains to depict Devgn’s family as devout; the mother climbs the steep steps of the vil­lage temple every single morning and so on. The franchise’s immediately identi­fiable title track, which features heavily in action sequences, anoints Devgn’s character as “Narsingh,” which means ‘lion among men’ literally — but in Hinduism, is a half-man, half-lion aspect of the god Vishnu (a divergence from Devgn’s Shaivism, but well within the vast umbrella of Hinduism references).

And if divine permission isn’t enough to sway you, Bollywood’s cop franchise industrial complex has one last trick up its sleeve: the vagaries of a broken system. Most cop franchises, starting with Dabangg all the way back in 2010, make it clear that their cop-protagonists exist in an irredeemably corrupt ecosystem ruled by politicians and gangsters, abet­ted by a compliant judiciary and media. This ‘no way out’ logic makes it easier for audiences to approve of the hero’s extra-judicial killings. Rohit Shetty’s Cop Universe employs a handy device to spell this out — repetitive thematic casting, pioneered in Bollywood by Rajkumar Hirani’s Munna Bhai films.

In Singham Returns (2014), Ashwini Kalsekar plays a journalist who’s a thorn in Singham’s side. She keeps criticising the police’s use of force and questions their tactics. In Simmba (2018), Kalsekar plays a judge who’s keen to dismiss the case (for lack of evidence) against the film’s secondary villains, a pair of brothers who rape and murder a young woman who Simmba (Ranveer Singh) considered his sister. In both mov­ies, Kalsekar’s character comes around to the hero’s totalitarian point of view: she makes her peace with the fact that these particular extra-judicial killings were a last resort against a broken system.

John Abraham’s Satyameva Jayate is the best example of this narrative strategy: in the movie, Abraham plays a vigilante named Virendra who’s hunting down and killing corrupt police officers. Virendra sees himself as a righteous cop, in part because his father was one (he died of suicide after being wrongly implicated in a bribery case). The film goes to great expository lengths to justify Virendra’s murder spree.

At one point, Manoj Bajpayee’s charac­ter Shivansh, an honest cop, is discussing the vigilante’s actions with his juniors. One of them tells Shivansh that the next target on Virendra’s list was a rotten cop, one who “spoils the reputation of the en­tire police department”. Shivansh claps back, noting that “it’s actually a few police officers who’re saving the department’s reputation” that the rest are uniformly bad. He quips: “Yahaan biryani mein kankar nahi hai, kankar mein biryani hai (The biryani does not have ‘a few stones’, it’s all stone with the odd grain of biryani here and there).”

Women have little to do in these male-dominated franchises. They exist either as love interests and/or damsels in distress, who smile approvingly after the hero saves them (usually, from sexual assault) or avenges them. All three of Rohit Shetty’s Cop Universe films so far have variants of this scene. When Rani Mukerji was announced as the star of the then-upcoming Mardaani back in 2014, a section of critics hoped that the film would subvert at least some of these tropes.

Instead, Mardaani merely reinforces these stereotypes. Mukerji’s character, Shivani Shivaji Roy, behaves exactly like a male cop-protagonist would in high-pressure situations, which is to say with recklessness violence. ‘Mardaani’ is a Hindi word, the transliteration of which would read ‘masculine woman’; the word actually means ‘brave woman’ (but that’s been all but forgotten). The first 30 minutes of the film are all about establishing Shivani as a ‘masculine’ enforcer. The ‘Shivaji’ middle name aids this, and also works as a shout-out for Marathi identity (one can even recall that moment in Singham where Devgn shouts, “I, Bajirao Singham, am a Maratha!”). Shivani even makes a sexual joke about her superior officer in front of her team, eliciting male sniggers.

Like the Radhe dialogue cited above, in Mardaani, too, power dynamics play out through sexual innuendo. When Shivani is overpowered by the film’s villain, Karan (Tahir Raj Bhasin), his choice of taunt is significant: “Mard oopar chadhte hain aur aurat oopar dekhti hai. (Men ride on top while women can only stare at the ceiling.)” In the film’s closing moments, Shivani tells the audience that in order to defeat preda­tory men like Karan, every woman has to “find her inner mardaani” ie be more like a man.

What explains the enduring popu­larity of these films and the fact that every year brings an all-new batch of cop movies? After all, sequels are seldom made if the original movie did not end up making a lot of money. Perhaps, these films serve a dual purpose: not only do they satisfy the audience’s appetite for straightforward, first-degree revenge stories; they do so while making it easier for the audience to forget the failures of governance all around them. Essen­tially, the hero’s vigilantism is proposed as a ‘cure’ for the same ‘system’ that these films insist is broken beyond repair: if you understand this paradox, you’ve understood Bollywood.

The cop franchise industrial com­plex offers all too simplistic solutions for complicated issues. These mov­ies are, therefore, a kind of chemical numbing agent for Indian audiences — you’re reeled in when you wince at the ultra-violence, and with every brutal beating the hero dishes out, you grow a little more desensitised. Until, of course, the day comes when you’re the one whistling and clapping at the bone-crunching action unfolding onscreen.

In December 2012, a friend and I watched Dabangg 2 in a South Delhi theatre. As it so happened, the film was released on the weekend after the ‘Nirbhaya’ incident happened. Just before the film’s intermission, there’s a scene where Inspector Chulbul Pandey saves a woman from being kidnapped at gun­point at her own marriage. He does so by snapping the would-be-kidnapper’s neck with his bare hands. The sound effects were particularly loud for this scene, too. The bad guy’s neck twists and snaps with an unholy crack. This scene was received by rapturous applause by the audience, much to our bewilderment. When did everybody become onboard with this sort of cold-blooded ‘instant execution’?

That moment and these cop fran­chise movies remind us that in the real world no Singham or Simmba comes to your rescue, not when a side of juicy, delicious mob justice is in play.