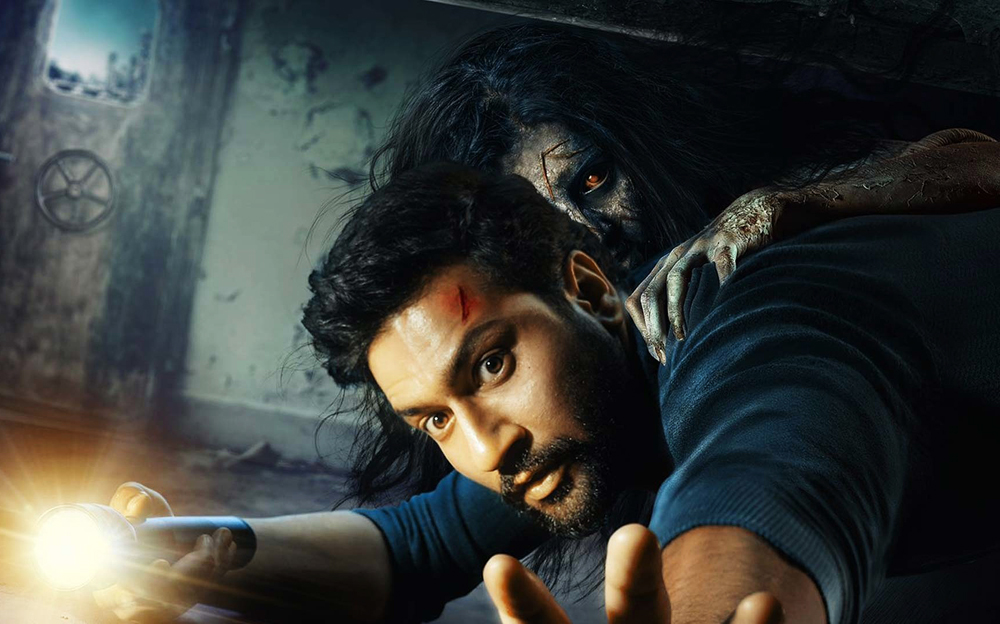 In 2011, a ship, the ‘MV Wisdom’, ran aground at Juhu Beach, Mumbai, and was gawked at by visitors for three weeks, until it was towed away. The idea of a huge vessel without a crew is haunting, and stories about it can be inventive. This movie, probably inspired by that incident, chooses to tell a ghost story about a Surveying Officer who boards such a ship, here called the ’Seabird’, to investigate the cause of her being abandoned, and to figure out what to advise about the removal of such a majestic vessel.
The Officer, Prithvi (Vicky Kaushal) has personal baggage from the past. He has lost his wife and daughter in tragic circumstances, and is suffering from post traumatic stress disorder. But he does not admit this to himself and carries on with his professional duties. So when he hears voices and music from the cabins of the ‘Seabird’ and experiences the presence of a trapped soul within its hull, he first thinks that it may be just hallucination, triggered by his dreams and memories.
But then he finds a CD in one of the cabins, that tells a different tale; of  torture and murder, and of Officers committing suicide by jumping off the deck, mid ocean. We see footage that tells of homage, or plagiarism, take your pick, from Stanley Kubrick’s ‘The Shining’. This is particularly true of scenes of a little girl running across the patterned deck of the ‘Seabird’, just like the little boy, Danny, cycling across the floor of the ‘Overlook’ hotel.
Despite considerable borrowing from films on possession, the overall ambience of ‘Bhoot – Part One’ is quite well done, and the film holds you firmly for the first one hour. But after you figure a few things out, the interior of the ship holds no more terror.  At some point in the narrative, horror turns to laughter, and the attention of the audience is lost.
Prithvi is visited several times in his dreams by his late wife (Bhumi Pednekar) and daughter. They berate him for his lapses, and claim that it cost them their lives. Guilt ridden, the poor man seeks redemption. He wants to save a human soul, and bring her back from ’the other side’. So he boards ’Seabird’ once again, this time accompanied by a ghost buster (Ashutosh Rana), complete with plenty of poltergeist jargon, and equipped with a meter that measures the proximity and intensity of spirits.
‘Bhoot – Part one’ is not unwatchable, but fails to make an impact on the viewer.