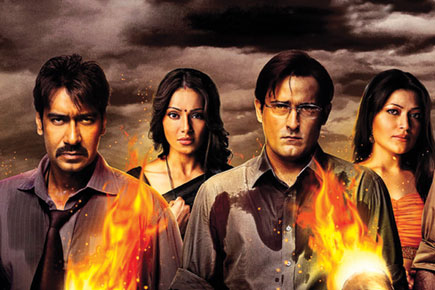 
We are currently celebrating international property rights stealing week in Hindi cinema. The blasé attitude to lifting another man’s idea is compounded by the cinematic professionalism of the adaptation; the skill with which structure, sequence and character are broken down from a Hollywood DVD of Mississippi Burning and simply restructured to fit another nation, another social inequity; as though the amorality of plagiarism is suddenly erased in the applying of a good stolen idea to a noble theme.

When Aakrosh comes down heavily on ‘honour killings’ in India and tells how patriarchy and feudalism ally with a religious cult to subvert the course of justice, no parallel, no irony is sensed in the inversion of a creative idea, the pilferage of a story set in a Ku Klux Klan-infested southern state in the US of the 1960s. A KKK cross is replaced by a flaming trishul, two FBI investigators by two CBI officers, three civil rights activists by three friends. Moral indignation is expected at the exposing of a social evil and none at the theft of art.

Yet, Aakrosh is well made, a technically sound film. The cast is excellent, with competent performances by Akshaye Khanna and Ajay Devgn as the CBI officers and an outstanding interpretation of evil incarnate by Paresh Rawal. He doesn’t attempt realism in his portrayal of a local police officer, but uses stagecraft to give you a villain from medieval theatre.

These quality sequences are quickly offset by fresh pilferage. In a scene from Ketan Mehta’s Mirch Masala, women in a chilli factory use potent red powder as a weapon. In Aakrosh, the two CBI officers seek refuge in an identical factory and try the same tactical counter attack on their pursuers. Clearly, plagiarism is a level playing field, with no distinction between the local and international variety.