A campy film about campus problems that is so much fun, it forgets the real issues it set out to critique. 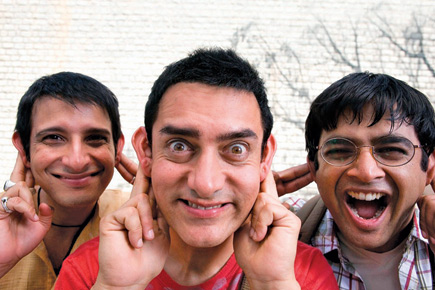 A campy film about campus problems that is so much fun, it forgets the real issues it set out to critique.


Are we overdosed on Aamir Khan? He makes few films and plays a variety of roles, but if acting is a combination of persona and the part, the parts are still amusing but the personality studied. Born in 1965 and graduating in 2009 with a BTech is cinematic licence of course, but this bio of a 44-year-old college kid does stretch method acting a bit. The other 2 idiots are 30 (Sharman Joshi) and 39 (Madhavan), all students at the Imperial College of Adult Education.

3 Idiots is Camp with a capital C. The subject of the movie is a critique of our lopsided system of higher education, but the treatment is a bender. Director Rajkumar Hirani stands the high seriousness of our IITs on its head and gives us a campus caper minus curriculum. There are moments that make you laugh out loud. Way and above the funniest scenes in the film involve a South Indian nerd called Chatur Ramalingam (Omi Vaidya). He is an unreconstructed Hindi challenged academic and professional climber and when he delivers a public speech, the text of which has been tampered with, it ranks as the funniest speech ever in shuddh Hindi.

So 3 Idiots is a hugely entertaining film. But oddly enough, precisely because the film is so camp, the impact of the subject it observes gets watered down considerably. The analysis of how our emphasis on science over the liberal arts creates a tribe of students temperamentally maladjusted and personally unhappy, becomes satire. For instance, when we enter the home of Raju (Joshi), the film turns black and white and his parents are cardboard characters from a 1950s Hindi film on genteel, urban poverty. Similarly with Farhan (Madhavan)—his aptitude for wildlife photography is placed in exceedingly stereotypical confrontation with parental expectation.

Educational reform is a pretext for three hours of fun and games. Boman Irani as the engineering dean is in his usual caricature mode, Kareena Kapoor is brought in to balance the sex ratio. Have a ball and a Happy New Year!