How artiste Chandralekha’s refusal to separate art and life inspired my parallel careers, one drawing upon the other 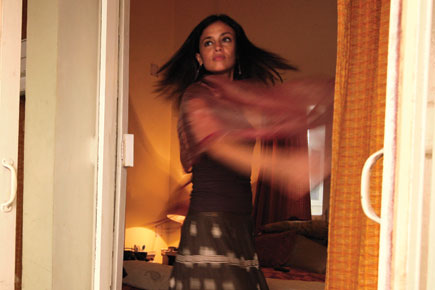 How artiste Chandralekha’s refusal to separate art and life inspired my parallel careers, one drawing upon the other


The story of how I came to work with Chandralekha, one of India’s most controversial and celebrated choreographers, is a story of serendipity. For the purpose of this essay, though, it is enough to know that we met when I was 26 and she was 73. I was a struggling poet who had dabbled briefly with yoga, and had returned to India to write a novel. She was famous, not just for her radical views on marriage (a form of slavery) and children (little terrorists), but for her many dance productions, which explored sensuality and spirituality in the body using a variety of Indian dance and martial forms. From 2001 till Chandralekha died in 2006, we worked together on her last choreographic work, Sharira, which I still continue to perform.

Why a choreographer at the height of her creative powers would want to work with a non-dancer like me is something I never asked. Chandra herself wasn’t overly concerned about my lack of formal education in dance. For her, technique was secondary, openness was all. Besides, she had moved so far away from Bharatanatyam and its “cosmetic smiles” that in many ways it was a blessing to work with someone who hadn’t spent years training in all those formal postures. I had nothing to unlearn, only to learn. And I learnt fast. After three months of twisting myself into the most unimaginable yoga asanas, I made my first public performance in Champaner, Gujarat.

First performances can be ripe territories for epiphanies. Chandra’s own, her arengatram in 1952, was a turning point in her life. It was a charity programme organised in aid of the Rayalaseema Drought Relief Fund. Chandra retold that story often, of the terrible moment when she just froze on stage. “I remember dancing about gopikas frolicking in the water, but in my head there were images I’d seen in the newspaper of the cracked earth and long queues of people waiting for water with tin cups in their hands. How could I dance about the abundance of water when the reality was so different?”

This stark division between art and life forced her to question the form and structure of Bharatanatyam, and while she continued to dance, she began engaging in other activities—politics, activism, design… eventually abandoning dance. She wrote haiku and made posters, went off to Woodstock and tried LSD (“I felt the grass growing under my feet”), stayed in a Zen temple in Japan with her friends Cartier Bresson and Dashrath Patel, returning to dance 12 years later with her landmark 1985 production Angika, which electrified the dance world in India and abroad.

My first dance performance was quite different.  It was a strangely powerful feeling to feel so connected, because the ‘work’, in a way, was not mine. The vision was entirely Chandra’s, my body was merely the vehicle. But through the movements that I had been practising for three months, I was, for the first time, able to channel a kind of power that Chandra had been hinting at all along. Then there was the other thing: the applause.

I had heard about the legendary responses to Chandra’s performances: 20 minute curtain calls, tears, bouquets, brickbats. No writer really understands this kind of immediate response to his/her work. If anyone is clapping for the writer, it’s the writer himself, toiling away in solitude at the desk. That night in Champaner, while hundreds of villagers gathered to watch our dress rehearsal, clapping every time I lifted an arm or a leg into the air, I knew that dance, because of its immediacy, was going to be the thing that anchored me, not writing. Chandra later said, “You’ll never get an audience like this in your life.” She was right, of course.

Over the years, my twin lives of dance and writing have flowed in and out of each other fairly seamlessly. Dance taught me the rigour and physical discipline that every writer needs, and poetry and literature in turn added dimensions and depth to the dance. Once in a while, the two would rub up against each other badly, or I’d experience a kind of mechanical stupor or disillusion. In those instances, I had to ask: what do I do about it? This is the question I’m interested in, because the way one responds will lead to either creativity or stagnation.

How should an artist behave in a time of contradiction? Do you passively dance on, enacting a myth of abundant water even when there isn’t any? Do you choose to portray the stark reality of waterlessness? Chandra chose neither. Her method was to reject dichotomies and search for the “joineries” to transform reality. It was a kind of resistance in a way. According to her, art was the only thing we had to survive. For an optimist like me whose previous role models had been writers for whom it’s de rigueur to stick your head in an oven when it all gets too much, or blow your brains out, this was deeply affirmative. Annihilation was anathema to Chandra. It was just not an option.

Ultimately, this is what I admired most in Chandralekha. Her ability to confront the limitations of life, by making some gesture towards it with her art. She did this by innovating, searching and questioning. Chandra always said of tradition that every once in a while, it needed to be dusted off and held up to the light for inspection. She was the most traditional and modern person I knew. For her refusal to compartmentalise art and life, for her ability to straddle many worlds without compromise, she remains to me a truly original Indian voice.