On a magic carpet with Ritu Kumar 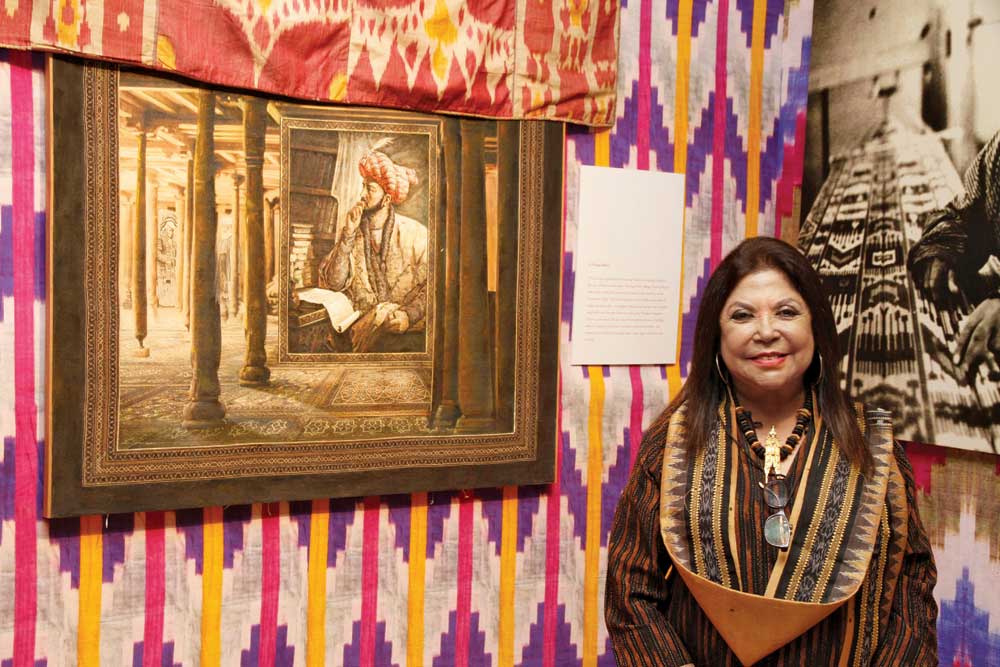 WHEN YOU ENTER the Visual Arts’ Gallery, at the India Habitat Centre, New Delhi, it seems as if you have stepped into the pages of designer Ritu Kumar’s diary. Notes, scribbles and personal accounts have been conjured to life through vintage textiles, paintings, photographs and memorabilia as part of the exhibition, Crossroads: Textile Journeys with Ritu Kumar.

You get a sense of flitting through time and space, as you get to experience the old market of Tashkent, with its exquisite ikat offerings in one corner of the gallery, and the weaving villages of Benares, with their lush orchards and rich brocade-work, in the other. By creating these intimate viewing spaces, dedicated to textile traditions seen during her travels to Europe, the Middle East and India, Kumar offers you the liberty to roam freely through her memories of people and places. You can make your own connections or mini-exhibitions from within Crossroads—just do an ikat tour, moving through the art centres of Uzbekistan to Odisha, the land of poetic, non-geometric ikats, and further on to Andhra Pradesh and Gujarat, where the tradition is far more geometrical. Or you could embark on a zardozi trail, to take a closer look at the aari, or the curved hook-thread embroidery technique practised in several parts of the world, which has lent a certain three-dimensionality to garments through the centuries.

“The collection on display here is both historical and contemporary,” says designer and textile historian, Mayank Mansingh Kaul, who has curated the exhibition. “So, if you have a Banarasi, dating back to the late 19th century, you also have a Banarasi jamdani from the early 2000s.” These are textiles that she picked up as a design reference. These have influenced and inspired her design vocabulary, this highlights how age-old textile traditions can be translated in a contemporary context as well. “If zardozi was initially done in velvet, she has shown how it can be done on printed silk as well,” he says.

As Kumar enters the gallery for a walkthrough, looking impeccable in a black silk kurta and a long skirt, I ask her what made this moment opportune for an exhibition such as Crossroads . “It hasn’t happened overnight, but is a result of travels to the craft-rich areas of the world through 30 to 35 years. I realised it was now time to pen down chapters on each region, outlining what I did and what I found,” she says.

It all started when she moved to Briarcliff College, New York, to study art history, and realised how little she knew of Indian art and craft. “People had a great deal of curiosity about European art, but never Indian. The latter was never taught,” says Kumar. So, she started frequenting the library, to read up on whatever material she could find on various traditions. Soon, she moved to Kolkata, got married and enrolled in a museology course at the Asutosh Museum of Indian Art, Kolkata. This took her to old archaeological sites and riverside settlements, one of which was the old Dutch colony of Serampore on the outskirts of Kolkata. “I discovered really old printing workshops there. At one point of time, printed goods would be sent from here to Europe. But the lack of employment opportunities and a platform to showcase their talent was taking the craftsmen away from their heritage,” she says. Just as an experiment, Kumar designed a couple of blocks and requested the artisans to print saris using those. This proved serendipitous for both, and soon the workers started creating more work for her, which she began exhibiting in Kolkata.

Meanwhile, Kumar realised that there were traditions waiting to be revived, and started researching them with great zeal. “Block printing had gone extinct in India. I travelled to England and France, where museums have specimens of these,” she says. One of the archives that she consulted was the Victoria and Albert Museum, London, which had one of the best selections of Indian prints. She studied those designs and brought them back to the regions of their origin.

KUMAR BECAME PART of an ecosystem in the 1970s which placed craft revival at the heart of its endeavours. People like Pupul Jayakar, Kamaladevi Chattopadhyay and Martand Singh began introducing India to its own textile traditions. These craft crusaders travelled to remote regions, stayed and worked with the artisans, exploring the craft in great details and learning on the job and from their mistakes. For instance, Kumar recalls an exhibition when she had mixed block prints with khadi, thereby making the saris really heavy. It taught her ways of finding the right balance between prints and fabrics. “When I started, there was no connectivity, no hotels, no internet, no mobile phones. Today, all of these facilities are available. It is now possible to go to Bhuj, so I want to share information on how to go, and who to meet,” says Kumar.

To achieve this, she has planned a series of publications— part professional memoirs, part musings of an art enthusiast— about the regions she has visited. This is, perhaps, the only known contemporary travelogue authored by a designer in post-Independent India. The first in the series, on Uzbekistan, was launched during the exhibition, and the rest, about centres such as Kashmir, Benares, Bengal, Bhutan and Burma, Tamil Nadu, Goa, Maharashtra, Gujarat and Rajasthan, will be released by year-end. “This could be a great educational tool for the younger generation, encouraging them to work there,” she says.

I ask her where this textile revival movement stands now. “At the crossroads,” comes the reply. Kumar mentions that there are nearly 16 million artisans and craftspeople in the country. But there is a dire need to connect these age-old traditions with modern fashion and industry. “They stand today at a point of major transition, with their future remaining uncertain due to rapid mechanisation,” she says. However, there is hope. Even if people are opting for Western fashions, Indian attire hasn’t yet lost its charm. The ikat designs that one sees in the caves of Ajanta and the beautiful embellishments depicted in miniature paintings continue to resonate in modern times. “India has the richest hand-crafted textile repertoire in the world. It’s the only country where these are still living traditions, while other countries have kept these alive only as museum or atelier activity,” she says. “Much will depend on how we shape a future for craft for the next generation of artisans.”