They are no longer an in-between taboo 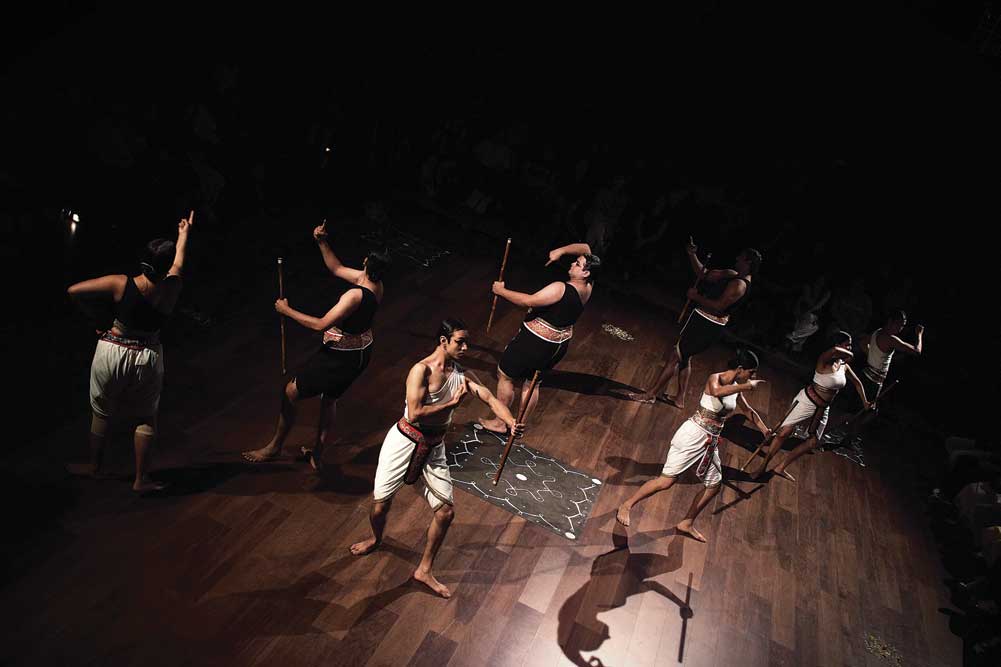 THEY WERE DRESSED in dhotis and blouses. Their eyes shone and were outlined by dramatic lines of kohl. Their agile bodies seemed to be searching for stories. A vocalist belted out the familiar pop version of the theme song of BR Chopra’s Mahabharata, accompanied by the tabla and violin.

Here was a group of young actors representing the story of perhaps the most underrated character in the epic. Writer-director Faezeh Jalali first stumbled upon the story of Shikhandi in Devdutt Pattanaik’s The Pregnant King. Back in 2010, while studying Theatre in the UK, she created a one-woman show about Shikhandi who was born a girl but raised as a boy by her father King Draupada. (She was born to kill Bhishma, who could only be killed by one who was ‘in-between’). Seven years later, Shikhandi: The Story of the In- betweens is a full-length play with eight actors who show a fluidity of genders. As a line written by Jalali goes: ‘I’m the androgynous, the Mr the Ms, I’m the good and the evil too. I’m me, but I’m also you. I’m the sublime. I’m the timeless, I’m all the universe encompassed.’

“Shikhandi is among the earliest trans- characters in Indian mythology, and for me mythological stories have always been the ones that have issues that are so relevant to the modern-day. If a trans-gendered person existed then, their problems must have been very similar to our dilemmas today. So the idea of the story was to portray the in-between of everything— of the physical form, of heaven and earth, of gods and demons, and ask why can’t a person just be a person regardless of their gender?” asks Jalali.

In both its physicality and poetry, with a strong dose of humour, the play unabashedly mocks current stereotypes that bind the LGBT community. From Shikhandi and Yaksha exchanging their sexual organs, to Shikhandi’s horny wife being silenced by a deafening orgasm by a now-male Shikhandi, the play is powerful in its language, and uncensored in its portrayal of the protagonist’s dilemma. “I wanted to use the stereotypes to break the stereotypes. We are very quick to label people in our society today based on gender, sexuality, name, profession, all kinds of things. For me, it is about getting beyond these boxes and looking at a more accepting universal nature of what life is,” she adds.

Importantly, Shikhandi, which opened at Mumbai’s National Centre for the Performing Arts last month, is just one among a handful of recent plays that talk about alternate sexuality. These plays look beyond the conventional ‘heterosexual’ narrative. From a one- man shows to full-fledged dance dramas, there have been around 30 different plays on the LGBT theme, most of them from Mumbai, in the last two years. For example, Dohri Zindagi (directed by Gurleen Judge) is the story of two girls in a Rajasthan village who are married off to each other. In The Gentlemen’s Club (directed by Vikram Phukan), women dressed as men perform a musical extravaganza. And a work-in-progress called Slamdunk (written by Shivam Sharma) is the story about gay men using specific chemicals for sex.

Twenty-eight-year-old writer-director Shivam Sharma’s stories represent the challenges of a gay person in India. “My interest in queer work peaked when I watched films like Bent (1975) and Aimee and Jaguar (1999),” he says, “But I was disappointed by the fact that there is not much queer work in India. We go to watch a film or a play to see a reflection of our lives, and there was almost nothing representing the lives of the queer community till a while ago. I wanted to create work that will help those within the LGBT community deal with their problems, accept themselves and create material that they can refer to within the artistic space.”

Shikhandi is among the earliest trans-characters in Indian mythology

Sharma’s stories on the sexual and emotional abuse of young men are not easy to tell. But as a writer-director, he is not one to be cowed down. “I am going to be proud and out, and vehemently assertive of my sexuality, and my work will reflect every bit of that. I don’t care about anyone lashing out against me, hurting me or even stalling my plays. I am ready to deal with it, as long as I am saying what I want to say,” he adds.

While Sharma’s work stems from personal reasons, for actor-writer-director Neha Singh, the whole space was a new discovery. Singh and her co-star Bhumika Dube are currently touring the country with Dohri Zindagi, based on a short story by eminent Rajasthani writer Vijaydan Detha.

Detha wrote most of his stories in his village Borunda, between the 60s and the 80s, in Marwari, and this one is clearly ahead of its time. It tells of two women who are married off to each other by the force of circumstance—in fulfilment of a pact their fathers had made before the children were even born.

“Most of his work was inspired by folk stories he heard from the Dalit women in his village. I read Dohri Zindagi five years ago and was dumbstruck by its progressive, feminist and extremely graphic depiction of the female exploration of sexuality and dismissal of patriarchy,” says Singh. In the play, one of the women discovers on her wedding night that her husband is a woman. And the play stays true to the original text in its depiction of female sexuality.

“When I read the story, I did not think of it as an LGBT story, but as a story of love between two people and how they fought with patriarchy to keep it. Dohri Zindagi normalises lesbian love in a way that you stop thinking of the two women as lesbians, but just as two people in love, and the audience wants them to be together.”

At one point, one of the girls asks to be turned into a male and her wish is granted. Then the ‘lesbian’ love turns into ‘heterosexual love’ but the audience always comes out saying that they wanted the two women to remain as they were; they do not want the woman to turn into a man. “I think that statement means that the play is able to normalise all kinds of love, not just the straight kind,” she adds, “That, to me, is the play’s greatest achievement.”

WHILE THESE PLAYS affirm same-sex relationships and alternate genders, they are more than the sum of their politics. This is a big step forward, according to those like veteran playwright Mahesh Dattani, whose play On a Muggy Night in Mumbai offered a gay voice nearly three decades ago, when they were rarely ever heard. Dattani says, “The motive 25 years ago was to spotlight a milieu, a sub-culture, which was not at all in the public domain. There was no internet then. I remember getting many letters of thanks. People were quoting from the Kamasutra, from our mythology, saying it is something that has already been explored in our culture. Of course, there were those who accused the play of endorsing Western culture too. I took both these responses as positive, because it had obviously touched a chord.”

Dattani went on to write a radio play for BBC, which was a detective story about a group of Hijras. On a Muggy Night in Mumbai will soon become a cine-play (a recorded version of a live show). But Dattani believes that a lot more needs to be done to bring homosexuality into the mainstream. “LGBT is still a minority community and hence is on the periphery on stage. I see youngsters today who are a lot more conservative than those in the 70s and 80s. Maybe it’s the homogeneity of the internet. We had the hippies, student revolutions, people willing to fight. Now I see it happening in smaller pockets and only because people want to be part of a tribe. The reason to rebel has to be a lot bigger than that,” he adds.

Ever since Article 377 criminalising ‘unnatural offences’ was reinstated by the Supreme Court in 2013, artists and activists have voiced their dissent. Apart from pride parades, numerous film and theatre festivals dedicated to the cause are emerging across the country. An especially good sign is that plays portraying homosexuality are growing up in the way they depict the relationships as well.

“There’s a kissing scene between two men in a play called Cock, directed by Manish Gandhi, about a bisexual man’s dilemmas. Four years ago, there was a fade out on the gay kiss, while the kiss between a heterosexual couple was shown. Now there is no fade out, and it’s shown the way it’s meant to be shown. This is a small thing, but it shows a barrier is being broken. The Court’s [ruling] led to anger being channelled into creative spaces, and that’s commendable. In 2001, there was a queer renaissance in the UK, and though India may be far behind, it’s an everyday struggle that counts,” says Phukan. In his play The Gentlemen’s Club, actors Puja Sarup and Sheena Khalid dress up in drag and perform as Shammi Kapoor and Elvis Presley.

While some believe that it’s the labelling that divides the LGBT group from those who do not belong to the community, Phukan doesn’t see it as a limitation. He says, “A play called Queen- size by Mandeep Raikhy laid out the dynamics of same-sex desire on a creaking charpoy under a constellation of wine glasses hanging from the ceiling. There was nothing clandestine in its portrayal. Gay people can exist in a cultural space and they don’t need to necessarily be in a society that accepts them. Portraying a lesbian or a gay man or a trans-person gives me a dimension, and there is no need to pretend that it is not different. I think one should celebrate the difference and only then will we be able to embrace it.”

Countries like the UK have seen a queer theatre movement for over two- and-a-half decades now. India has a long way to go, and so the work of those like India’s first transgender theatre group, Panmai from Chennai, stands out. As Dattani says, “The youth representing these issues are the future of our nation, and no matter what the approach is, it should be applauded.”