Anurupa Roy: ‘I Have an Angry Draupadi in Me’ 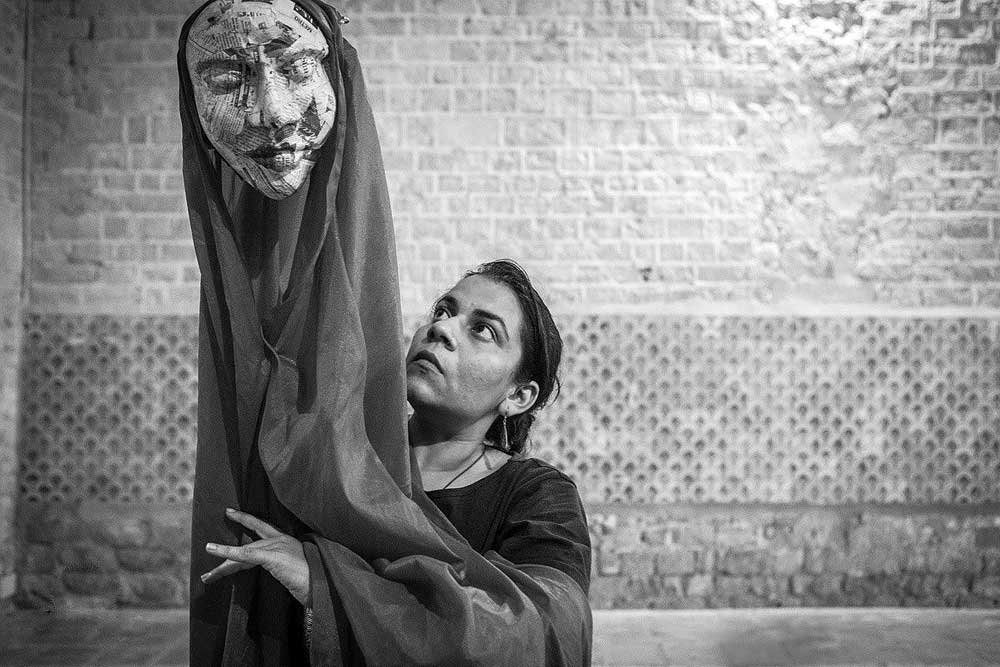 “SOMEONE COMPLAINED that he had nightmares about our Shakuni and Ashwatthama. It was the best compliment I received all evening,” Anurupa Roy says cheerfully. It sounds bloodthirsty, but I understand and sympathise completely with the unnamed complainer and Roy. The sequence in Roy’s Mahabharata that told the backstory of Shakuni was shocking. It added cannibalism to the already murky story of Gandhari’s family giving their meagre food and bones to the cleverest son, Shakuni, when Bhishma imprisoned them all till they agreed to her marrying the blind Dhritarashtra.

What made this version of the Mahabharata larger than life was not only the traditional shadow puppets combined with multi-media and human-size puppets as well as masks made with materials like thermocol and plastic. It wasn’t even the dexterous mix of Kathak, Chau and Kalari forms. Or even the ushers, who were all dressed in period costumes; or the mesmerising voice of Kannadiga folk, theatre and puppet artist, Gundu Raju, as narrator. It was the way each vignette culled from the Mahabharata was calculated to shine a light on an inner dilemma of a key character and how their choices led to their end. It is little surprise that Roy’s Mahabharata was awarded the Best Production award at this year’s Mahindra Theatre Festival Awards (META).

The other standout feature of the play was the audacity of the questions asked, mostly by the clowns/interlocutors, Bangarakkha and Sillakeyata. Some of the questions were funny, like why Dronacharya, the great teacher, didn’t realise that there was an elephant called Ashwatthama on the battlefield, and how he thought his son, a chiranjivi, was dead. Others were far more subtle: whether Krishna had already decided that there would be complete annihilation of everyone on both sides of the war; or, when the Kauravas and Pandavas were themselves not of Shantanu’s blood, why it mattered if someone from another family took the throne.

Anurupa Roy is unusual. She’s a puppeteer and puppet designer who trained abroad, and then returned to bring India’s ancient puppet forms to an urban audience. She has used puppets for psychological and social interventions in conflict areas like Kashmir, Sri Lanka and Manipur, as well as to raise awareness about HIV/ AIDS and gender issues. And, at the same time, she’s worked on comic plays like Almost 12th Night, which looks at Shakespeare’s Twelfth Night from a woman’s perspective.

“My parents bought me a puppet when I was 11 and by accident or serendipity, we were taught puppet theatre in SUPW (Socially Useful Productive Work) class in Sardar Patel (School, Delhi). Twenty of us continued in college. But of course, I didn’t want to tell my classmates at Lady Shri Ram College (LSR, Delhi) that I do something as crazy as puppetry. So, I’d smuggle in another puppeteer and a musician after college finished for small NSS (National Service Scheme) shows we were doing for neighbourhood kids. One day, we came forward after the show to take a bow and we realised all the college teachers were sitting there in the audience. But it did three significant things. In the short term, we were asked to perform in college, including at the students’ orientation, and the boys were allowed to come into college legally. And I understood that puppetry was as much for adults as kids.”

I met a teacher from LSR at the performance of Mahabharata who said that she’d never taught Roy but came to see her perform because “she’s ours”. Her college days influenced Roy greatly; as a student she travelled to Kashmir to collect stories of women from villages. While her love for puppetry started then, it was bolstered by the works of Dadi Pudumjee. She went on to study puppetry in Sweden as there were no puppet schools or pedagogy in India. “But the flip side,” she says, “to studying puppetry abroad is that while it’s excellent at teaching you skills, the content is specific to Europe and Scandinavia. So I had to come back and re-adapt.”

In Roy’s Mahabharata each vignette culled from the epic shone. A light on an inner dilemma of a key character and how their choices led to their end

When she returned to India, she decided to start her own company as there was no possibility of working with a large one here. While this had its advantages she also found there was a serious dearth of skilled puppeteers. She says, “Sure, young people can learn the skill over YouTube but you can’t get access to discourse, theory or training.”

Today the scenario is a tad different as there are two large and five small puppet theatres in India. But what India does have is a rich history of puppetry. Leather forms are prevalent in Andhra Pradesh, Kerala, Tamil Nadu, Odisha and Karnataka. String puppets and glove puppets are also common. Roy hazards a guess that India has close to 250 puppet performance groups in India.

Roy’s theatre has also empowered street children who studied puppetry through the Salaam Balak Trust. Mohammad Shameen and Avinash Kumar have been working with Roy for more than a decade now. She says these children chose the life of art early in life, which parents of middle-class children seldom allow.

I return to the Mahabharata. It’s all I’ve discussed with friends for three days, because it both horrified and fascinated me. The puppets were grotesque and fantastical at the same time. Roy elaborates on its history. “I met Gundu Raju in 2004, and realised that the myths have lived through oral narratives for over 3,000 years and shadow puppets have been used as part of that for at least 2,000. The Mahabharata we perform is the Sillakeyata Mahabharata. It’s never been written down, but it’s the same as the Bhagvat Kathas. And Bangarakkha and Sillakeyata, the clowns, are an important part in between the narrative, as a source of disruption. The riddles that they ask are very contextual. In Kerala, the clowns are very clinical. In Andhra, Sillakeyata has a huge penis which he uses to spray semen all over the crowds. And Bangarakkkha was always naked. Then, as the performances moved to the cities, they started covering her with hair. They’re a part of the burlesque tradition.”

In Roy’s puppetry, the puppeteers come out of the shadows and this helps make the puppets look real. When I think of puppet theatre, I expect a form of entertainment that is suitable for children. But Roy’s Mahabharata is dead serious. While there are moments of relief, the vignettes culled are nightmarish —whether it’s the attempted gang rape of Draupadi, the death of Karna due to his caste, the slaying of the sons of Draupadi by Ashwatthama and Kripacharya, or the story of Shakuni. Roy says, “Of late, we’ve been performing serious plays, because the times are serious. And the Mahabharata comes from a space of responding to stuff here. But we’ve kept the satire, and none of these characters were by accident. We see the archetypes around us every day. We’ve often yelled, ‘That man has a Karna syndrome’; or, ‘My God, she’s such a Gandhari!’ I have an angry Draupadi in me,” she says with a laugh.

For Roy, the epics are a way to address contemporary issues. She says, “We live in an extremely violent society. The existence of humans may come into question. Conflicts are constant. And caste, gender, violence against women are very contemporary issues. The container is mythology.”