The Faux Stages of Man 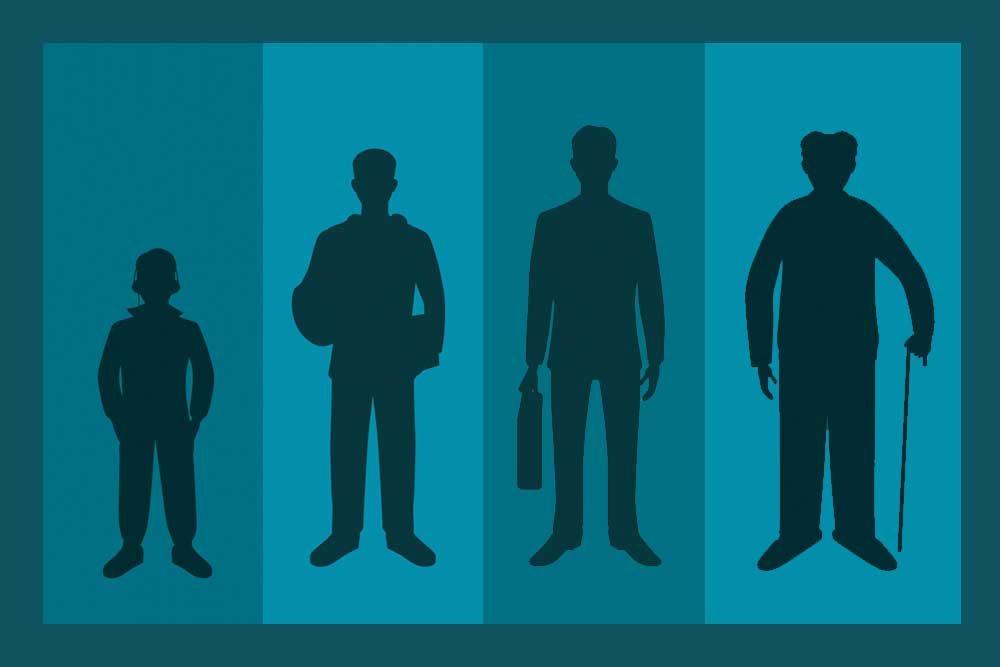 न त्वं विप्रादिको वर्णो नाश्रमी नाक्षगोचरः This is 1.5 of the Ashtavakra Gita, a text I have mentioned earlier. This is a text where the sage Ashtavakra teaches King Janaka. “You are not a vipra or any of the other varnas. You do not belong to an ashrama. You are not something that can be seen by the eyes.” If Janaka is not any of these, what is Janaka? That’s the objective of this entire series, not to be answered immediately today.

Let’s take the ashrama bit first—the fourfold classification into brahmacharya, garhasthya, vanaprastha and sannyasa. In very loose terms, brahmacharya is described as celibate student-hood, garhasthya is described as the householder stage, vanaprastha is described as the stage of retiring to the forest and sannyasa is described as the ultimate stage of becoming an ascetic, hermit or sage. If you live to be 100 years, 25 years for brahmacharya, 25 years for garhasthya, 25 years for vanaprastha and 25 years for sannyasa. This is an attempt by the external world to force individuals to adhere to a standard template. That template wasn’t the norm even then. But before that, I have already said that translating brahmacharya as celibacy is inappropriate. It means walking along the path of the brahman. Indeed, several texts say brahmacharya is not celibacy, but sexual intercourse within the prescribed norms, such as only with one’s own wife.
Similarly, sannyasa doesn’t mean renunciation, but establishing oneself in the path of the truth. If sannyasa is taken to be renunciation, in that day and age, how many people became that? Think of the ashramavasika parva of the Mahabharata. Dhritarashtra, Gandhari, Kunti and Vidura retired to the forest. Was that vanaprastha or was that sannyasa? I think it was vanaprastha. Think of the blind couple in the Valmiki Ramayana, whose son Dasharatha was shot by mistake. Was that vanaprastha or was that sannyasa? I think that too was vanaprastha. There will indeed be people who resort to sannyasa and they won’t necessarily wait till they become a 75-year-old to do so. Bhutan is a country where there are a lot of monks, something between 10,000 and 12,000. That’s around 1.5 per cent of the population. But do remember that in a country like Bhutan, there is government funding for monks. Even if there is community funding of monks, as opposed to government funding, very small shares of the population will become monks. The bulk of the population will consist of those who are in brahmacharya and garhasthya. How many will resort to the forest today? Vanaprastha is an attempt to trigger detachment from the material world through physical distancing from the material world. Our challenge is to remain in the material world and ensure detachment or non-attachment.

Individuals vary in their traits and inclinations. That fourfold ashrama classification is an artificial and forced attempt to over-simply and straitjacket us. Even if one has in mind a template for progress through life, I think that संस्कार (samskaras) idea offers a better template than ashramas. I am not particularly fond of the English translation ‘rite of passage’. Samskara has a nuance of cleansing and purification, which is why each samskara is associated with taking a bath, as one moves from one stage of life to the next. I am aware that the listing of samskaras varies from text to text. I can increase the numbering to 16, or even 48. But there shouldn’t be any dispute that the more important ones are the following. (1) Vivaha (विवाह) or marriage; (2) Garbhadana (गर्भाधान) (Note that this is not the same thing as rituals undertaken by a new couple to set up household together, including the first act of sexual intercourse.) Garbhadana is not an act of physical intercourse, it is an act of physical intercourse with a view to having a child; (3) Pumsavana (पुंसवन)- This is after there is a pregnancy and is designed to ensure the birth of a male child; (4) Simantonnayana (सीमन्तोन्नयन)-I guess one has to translate this as parting of the hair. Married women are often referred to as simantini (सीमन्तिनी), because of that hair parting. If I am going to be pedantic, with that qualification about material varying across sacred texts, that’s not quite correct. A married woman becomes simantini when she has conceived and that pregnancy has been successfully carried through to something like the 8th month, it typically being the 3rd month for pumsavana; (5) Jatakarman (जातकर्मन्)- the rituals for a new-born child; (6) Namakarana (नामकरण)-naming of the child; (7) Annaprashana (अन्नप्राशन)-the first time (उपनयन)-Note that this is not the same as the child having started to study. You can call this a sacred thread ceremony, but it has the nuance of a teacher having accepted that the student is fit to be taught; (10) Samavartana (समावर्तन)-Returning home after studies have been successfully completed. This is a bit like a graduation ceremony and graduates are called snatakas (स्नातक) because they have a bath (snana) before the ceremony; and (11) Anteyshti (अन्त्येष्टि)-Last rites after death. My purpose is not to discuss these samskaras. I only wanted to indicate that I find this more useful than the mechanical time-line of the four ashramas.

If the ashrama bit is over-simplified, so is the bit about four varnas. My surname is Debroy. Had I got married through a matrimonial advertisement in a Bengali newspaper, I would have been classified under ‘Bengali kayastha’. This deduction is based on the surname. When my father died, I discovered that he had left behind a diary. After retirement, he had gone to the ancestral village in what is now Bangladesh and dug up the family records. Consequently, in the diary, I have a family tree that goes back to 1500 CE. The earliest known ancestor was someone named Borondeva and ‘dev’ was part of the first name, not the surname. ‘Roy’ was a title conferred by the local Afghan rulers later. You may have heard stories about how brahmanas like Mukhopadhyay, Bandopadhyay, etcetera, were imported into Bengal, circa 10th century CE. To the extent we have some records, their first names were Khitisha, Medhatithi, Veetaraga, Sudhanidhi and Soubhari. You may also get a different set of names from an alternative source, but those names will also be first names, not surnames. The likes of Mukhopadhyay and Bandopadhyay were titles conferred on individuals. As these surnames indicate, these titles were conferred on those who excelled at teaching, one of the six tasks brahmanas were supposed to perform. What’s true of Bengal is true of the rest of the country, indeed it is true of many parts of the world. Surnames indicate professions.

I don’t want to get too much into the varna issue, because it is not critical to what I am talking about. However, there are some points to be made. First, one should be careful in indiscriminately quoting from the Bhagdavad Gita-चातुर्वर्ण्यं मया सृष्टं, ‘I created the four varnas.’ If one is going to quote, let us have the complete quote from the first half of 4.13. चातुर्वर्ण्यं मया सृष्टं गुणकर्मविभागश: ‘I created the four varnas, according to an individual’s qualities and work.’ As stated, it is a functional classification according to specialisation of labour and no more. Nowhere does it suggest anything about a varna being hereditary. Let’s also not forget that the Bhagavad Gita, even though it contains the essence of shruti, is a smriti text that reflects the socio-economic milieu of the time.

Second, the primary meaning of varna is complexion, not caste.

Third, something like Manu Smriti tells us that brahmanas could eat some kinds of fish. But who caught the fish? If you look at the list of duties prescribed for brahmanas , kshatriyas , vaishyas and shudras , none of them were entitled to catch fish. A dhivara , kaivarta or dasa caught fish. In other words, the fourfold varna structure is a gross simplification of the way functional work classifications worked.

Fourth, take a look at Chapter 10 of Manu Smriti. It is an extremely detailed taxonomy of what happens when one varna marries another. What will be the varna of the offspring and what will be the varna when such a mixed offspring father marries a mixed offspring mother and they have a child? It is not just the Manu Smriti. Many other Dharmashastra texts have detailed taxonomies too. A reasonable inference is that there were many kinds of work outside the four- varna structure.

Fifth, I can cite plenty of instances, not just Vishvamitra, of someone born into one varna practising a different kind of varna ’s means of subsistence. Indeed, the Apad Dharma section of the Mahabharata allows deviations from prescribed occupations in times of hardship.

Sixth, all the evidence suggests varna wasn’t hereditary initially. Sure, it eventually became hereditary, with all the consequent ill-effects. But that’s not how it started.