Star Wars: Attack of the Tweets

Anonymous tweeters are taking the mickey out of superstars like Salman Khan and Amitabh Bachchan. 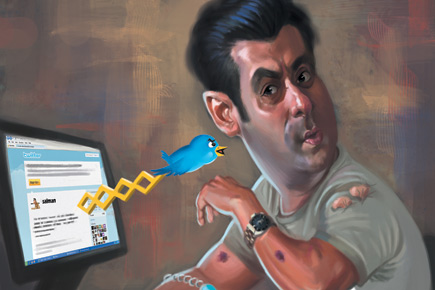 Anonymous tweeters are taking the mickey out of superstars like Salman Khan and Amitabh Bachchan.


He’s the waxer of Akshay Kumar’s chest hair. At least that’s the way Bollywoodgandu describes himself on his Twitter home page. Yet, to those in tinsel town, he is the new ‘Fake IPL Player’, the one who attacks stars with fingers dipped in vitriol, clattering furiously away at his keyboard every second that they put a new tweet up. In a few months, Bollywoodgandu has notched up more than 5,000 followers, among them Abhishek Bachchan, Vijay Mallya and Anurag Kashyap. When Salman Khan was recently embroiled in controversy over his 26/11 terrorist attack statements, the superstar tweeted, ‘I mite hv to get off twitter. Don’t want to but wat to do?’ Instantly, Bollywoodgandu shot back, ‘Well for one…stop tweeting like you failed 4th standard.’

On Twitter, being anonymous is irresistible. For the first time, your matinee idols are just a mouse click away and there are many who want to expose their feet of clay. ShutupSajid sprang up earlier this year, fashioning himself on the TV host-turned-filmmaker known for his brash style, Sajid Khan. Alluding to the January 2009 Screen Awards controversy when director Ashutosh Gowariker snapped, “Shut up, Sajid!”, this Twitter handle began by picking on Sajid Khan for his toilet humour and asinine money-spinners Heyy Babyy and Housefull. Pretending to be the director, the tweeter made a parody of him.

Without warning, ShutupSajid vanished from the virtual world, but popped up again last month as ButtupSajid. This time, he came down heavily on the Bollywood galaxy of stars in Twitterverse. Taking a dig at the tearjerker We Are Family, he tweeted, ‘Lessons from #WeActHammily<https://twitter.com/search?q=%23WeActHammily>: 1) Blood is thicker than water. 2) Siddharth Malhotra is thicker than an otter.’ Another time, he picked on Genelia D’Souza’s teenybopper attitude: ‘Does @geneliad<https://twitter.com/geneliad> have anything to do other than endorse products & chew gum in dumb Telugu films? Proof bhi toh chahiye na?’

What binds the tribe of anonymous tweeters like Bollywoodgandu and ButtupSajid is that they’re catty, devastatingly frank, irreverent, potty-mouthed and often very funny. So long as you’re not at the receiving end of their tweets, this is entertaining stuff for followers to log onto. Neeraj Ghaywan, a marketing manager-turned-assistant director based in Bombay, says that followers get vicarious pleasure from reading the tweet attacks. “Celebrity tweets are so mindless,” says Neeraj, “When you have an open Twitter profile, you can’t say anything to these stars. It’s good fun then to read these tweets. Also, through this, you realise that everyone is equal on Twitter.”

Systems engineer Aniruddha Chatterjee points out that professional constraints often make it difficult to attack a star publicly. “Then it’s hilarious to read comments by Bollywoodgandu or ButtupSajid. Some celebs just retweet trash on fans telling them how good they were in a film or how lovely they look. At least it’s funny to read anonymous tweeters,” says Aniruddha.

Anonymous tweeter Damoviemaniac follows other tweeters because he gets to hear scoops on cinema. “These tweet handles usually leak out news first,” he says, “I’m based in Kolkata and have information on the film industry here, so I use a secret identity to break the news on Twitter first.”

As a social phenomenon, Twitter has broken one boundary after another. Where you needed someone to accept you as a friend on Facebook to be able to view their profile and get across to them, Twitter makes it easier to be heard. Anyone can follow you, which means that anyone can also attack you with virtual barbs. Hollywood star Demi Moore, one of the first celebrities to sign on to Twitter, went on the warpath in 2009 with gossip blogger Perez Hilton when he posted pictures of her daughter Tallulah’s skimpy dressing at a party.

When reality star Kim Kardashian, inspired by The Graduate, did a suggestive photo shoot for Elle magazine with teenaged pop sensation Justin Bieber, she was unprepared for the hate tweets. Shaken by death threats from diehard Bieber fans on Twitter, Kardashian hastily clarified that the intimacy was for the cameras and she really had nothing going for the teen star.

It’s easier to attack someone under the cloak of anonymity. If Fake IPL Player modelled himself on the fake Steve Jobs, in Australia, a whole host of fake tweeters model their identities on politicians like Prime Minister Julia Gillard and leader of the opposition Tony Abbot.

To followers here, the bitterness of hate-tweeters offsets the sickly saccharine sweetness of the industry. Bollywood would rather use Twitter as a backslapping and publicity tool. A couple of weeks before a movie release, the cast, crew and their family and friends endlessly gush about the film. Sonam Kapoor went on a blitzkrieg before Aisha, Karan Johar used Twitter as a marketing tool for his My Name Is Khan (MNIK), I Hate Luv Storys and We Are Family, Priyanka Chopra pushed her Khatron Ke Khiladi and lately Anjaana Anjaani, while Salman Khan created quite some buzz with his wacky asides before Dabangg. If Bollywood catches a preview before the movie hits theatres, syrupy two-line reviews from the industry start spamming followers. Together, a blockbuster director, a heavyweight producer and their starry cast, plus their friends and family, can reach out to more than half a million followers on Twitter by endorsing a movie weeks ahead of its release. Followers often overlap—chances are that someone who reads Arbaaz Khan’s or Sonakshi Sinha’s tweets already follows big guy Salman.

Anonymous tweeter Moifightclub thinks that it’s unfair of Bollywood then to place an embargo on negative reviews a couple of days before a movie’s release (an unwritten condition if a critic wants to be invited for a preview), when any glowing comment is bandied about on Twitter and re-tweeted ad nauseam as pre-publicity. “You can put an embargo on the movie’s plot,” points out Moifightclub, “but not on an opinion. Why should only negative reviews be held back till a film releases? That’s a double standard.”

On birthdays, the Bollywood fad now is to wish the star openly on Twitter instead of picking up the phone or sending a private message. When Shah Rukh tweets about struggling with a common cold, Amitabh Bachchan lightly reproaches him about falling sick too often and tells him to take better care of his health. As Bachchan won the National Award last week for Paa, everyone from Lata Mangeshkar, Asha Bhosle, Mohanlal, Mammooty and Shammi Kapoor to Preity Zinta and Riteish Deshmukh tweeted congratulations.

While everyone gets hit, there are some soft targets for anonymous tweeters. Uday Chopra, Kamaal R Khan, Sonam Kapoor, Karan Johar and Celina Jaitley are some, as are some film journalists. Shahid Kapoor is one of the favourites for the way he massacres spellings.

How do the stars respond? Mostly by blocking abusive Twitter handles. Yet, sometimes, the attack is so vicious that the stars bail out.

Imran Khan was avalanched by anonymous tweeters about his acting until he shut shop on Twitter one day, even though he had more than 100,000 followers at the time. Aniruddha says, “Why quit because of an opinion? Get a life. After all, why take Twitter so seriously?”

Sometimes, the attacks backfire. Recently, an anonymous tweeter had to surrender his account when one of his targets pulled rank. Anurag Kashyap’s imitator Imanuragkashyap had to delete his account when the DevD director threatened to go to the cyber police because the fake tweeter had even set up meetings with struggling actors.

When the attacks become too personal, readers tend to unfollow the Twitter handle. “If you just take dumb potshots, it’s a bit pointless. Criticise someone with logic,” says Neeraj.

Often, hardcore Bollywood fans hit back at anonymous tweeters. Tarzanhoon, a tweeter who loves to take the mickey out of stars, says, “When you target AR Rahman or Salman Khan, people send nasty tweets, saying, ‘You have no other work?’ But then, there are also people who jump to your defence and create a full-on war.”

One fanatic follower called Last Clarion recently threatened to kill Bollywoodgandu: ‘Say anything against @PriyankaChopra<https://twitter.com/PriyankaChopra> I will hunt you down, slit your throat.’

Anonymous tweeters also say that it’s become increasingly difficult to maintain their secret identities. One follower says, “Everyone is dying to find out who Bollywoodgandu is, but the common perception is that he isn’t an industry insider because he offers no Bollywood gossip. He only reacts to the actors’ tweets.” The stars themselves rarely engage with hate tweets, but their publicity managers often do dig around to find out who are behind these attacks.

Despite the pitfalls, the freedom of anonymity on Twitter is here to stay. Tarzanhoon says, “Twitter is permanent. Nothing can stop us. There’s a thrill in finally being able to express yourself—and it’s great fun.”