Having pulled off the best performance of her career, Sonam Kapoor reveals why she can’t talk of Neerja in the past tense and why superstardom is boring 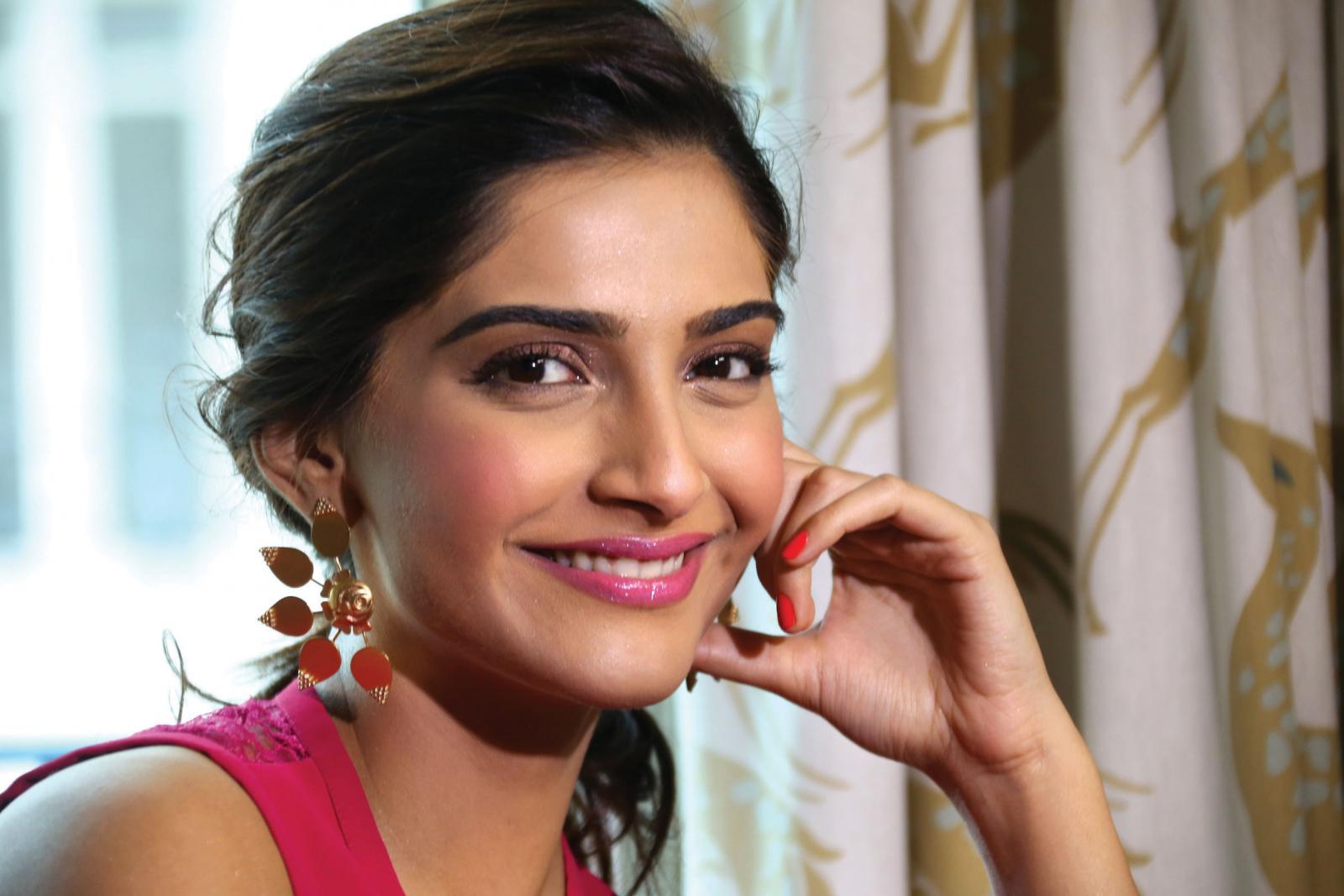 Sonam Kapoor isn’t the most ambitious actress you’ll meet. She does one film a year. Takes a couple of months off to travel and read. She doesn’t follow the example of her contemporaries, who are racking up offers from Hollywood. And she cares to measure her performances only against her own previous work. She isn’t part of the rat race, is glad to travel on a parallel track, and more importantly, at her own pace. It takes some self-assurance to be as secure as she is, and she’s well aware of it. “It’s where my performances come from. How am I going to deliver if my energies are scattered, and if I care about what the world is up to?” she asks, helping herself to baigan sabzi at a generous lunch served at the Kapoor dining hall. She chooses to chat with me over a leisurely Monday meal rather than regurgitating answers in a five-star hotel room. It’s new, it’s casual, and certainly refreshing.

Dressed in mustard palazzos, a slinky white shirt and with her poker-straight hair sleeping on one shoulder, Kapoor is a picture of calm. You’d think she would be reeling from all the acclaim that’s coming her way from her latest release Neerja, but at the moment all she’s glad about is having caught up on some sleep. “I haven’t slept in four months,” she says with her trademark giggle, even reprimanding herself for having missed the Budget on television. “Yes, I missed the Oscars too, but I think catching up on the Budget might affect me a bit more than an award show,” she adds.

Anyone in her shoes would try to maximise the attention that she has received for playing an Indian female hero who saved hundreds of lives on the hijacked Pan Am flight on 5 September 1986. Posthumously, Neerja Bhanot was awarded India’s highest peacetime military award for bravery, the Ashoka Chakra. While Kapoor is grateful for all the praise coming her way for Neerja, she insists that she can’t take complete credit for it. “I’m so happy to have played a part like Neerja, but I’m not going to say that it worked all because of me. There were 250 people on set working equally hard. There’s a writer who worked for two years on the script, my director, the editor, the musicians… it’s a collaborative effort. Of course, it was a huge responsibility on my shoulders because I was playing the lead, but it’s not something I have done single- handedly,” she says.

It was a bold move to cast Kapoor as Bhanot. Here was an air-hostess who took bullets so that she could save the lives of more than 350 passengers. She is a hero whose story of courage will inspire generations. Undoubtedly, the role required someone with a strong personality and who was gutsy. While Kapoor looks the part to the tee, it is her portrayal of the character that is most convincing. “It was her sheer sincerity as a person that worked most for the role,” says director Ram Madhvani who had Kapoor in mind for the part from the beginning.

Turns out he was right. From the first frame where we see Neerja mouth a famous dialogue from Rajesh Khanna’s Anand (1971), Sonam Kapoor is nowhere to be seen. She makes you fall in love with the character, so much so that you hope that Neerja will survive the massacre. Kapoor uses her fragility to her advantage, and makes the character real and relatable. As the strong-willed and independent, vulnerable yet resilient flight purser, she plays her part with conviction. This is possibly her best performance to date. “I can’t talk about Neerja in past tense. There was something so strong about this woman who appeared to be so soft and polite on the outside. Her beauty was ethereal, but her strength was enthralling. And Indian women possess that quality,” she says.

Of course, the character and actor come from worlds that are poles apart. Neerja was from a modest middle-class background, who worked two jobs. Kapoor had to understand the space that she hailed from. “When I met her family in Chandigarh, it was incredible to see the values that guided them.

Their acceptance and validation was something that gave me confidence. It was very important for me.” From watching Rajesh Khanna films to understanding what a young, ambitious Indian woman of the 80s felt and believed in, Kapoor traced the character from scratch. “She belonged to a different era, but hers is a story that’s more universal than any. A woman standing up and fighting for what she believes in is relevant in any age, and that’s what Neerja’s victory was all about. I always loved studying history in school because there were so many inspiring characters to pick from. We need figures like Neerja for our future generations to learn from,” she adds.

Clearly, playing this part has been a singular experience. She admits that Neerja brought alive the idealistic 22-year-old she once was. “I have never been a difficult kid, but yes, I loved to be a torchbearer. It could be something as small as fighting for a muffin, but I would stand up and win an argument. When you’re younger, you are so much more idealistic, right? Yes, I wanted to change the world, I wanted to change the way people look at women. Youth has no self- preservation. I had all these dreams and ideals. I identified so much with the 22-year-old Neerja,” she says.

Kapoor confesses grappling with different ideologies through her life. Few know this, but she turned vegan when she was 15—for about seven years—in order to stand up for animal rights. “I couldn’t keep that up because it became virtually impossible to maintain that lifestyle when you’re shooting and travelling so much, but I’d like to believe that even today I am more of an idealist. I’m the kind who said, ‘I’m in love with Bertolt Brecht,’ at one point and then go do an Anees Bazmee film at another. It makes no sense, but that’s just who I have been,” she says. Even while she might be dismissive of some of her professional choices, most have been well chosen. From Zoya, the young and manipulative Muslim girl in Raanjhanaa (2013) to Milli, the free-spirited care-a-damn doctor in Khoobsurat (2014) to Biro the quiet village belle in Bhaag Milkha Bhaag (2013), all her roles have a bit of Kapoor in them. And they’ve worked. “That’s the beauty about being an actor. You can have so many lives. You can be everything at a go. You can have different ideals and see where they take you all at once.”

Her personal and professional experiences, she believes, have helped her grow. Today, the girl who always had a foot in her mouth has learnt to maintain a balance between her thoughts and her words. “I used to react without thinking. But now I respond. It’s made my life easier and it also gives me space to say what I really want. I stand up for what is right, but I do it in a way where it can effect more change. Otherwise, the purpose is lost.”

She also seems more contemplative than before. She isn’t talking about her next red carpet appearance. Instead, she is hoping she can turn her phone off and take a sabbatical soon. She’s happy her work is being appreciated, but she’s not dying to return to the sets. “I’ve never been insecure because nobody can be harder on myself than me. I don’t judge my life by my work. I don’t think I would have been able to do Neerja if I was like that. I love my job enough to not make it my life. I don’t want that wonder, fear, passion, principles to go away because of wrong ambitions. I’m ambitious, to be a better human being, but it’s not compulsory for me to be the superstar of the country. I find that boring.”

Kapoor is the kind who will make choices and remain proud of them no matter what. We saw a glimpse of her in Coldplay’s latest music video Hymn for the Weekend. Many criticised her for that appearance. “I got to spend two days with Chris Martin and my name is on a Coldplay album forever. And it was the most fun I had on a weekend,” she says happily. She’s not sure what her next film is going to be, but she will be off to Goa soon to celebrate her sister’s birthday. She’s happy to take things easy, as long as she knows what she’s doing. “When you swim, you need to come up and take a breath. Otherwise you will never finish that lap,” she says.