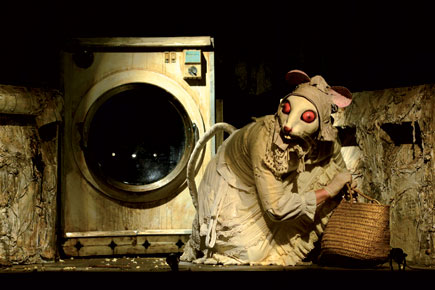 A boy tugs his mother’s shawl and puts forth his right hand. He is holding a toy, a Ben 10 with its head missing. He is standing ahead of me in the long queue for tickets to the puppet play Hilum at the 6th International Theatre Festival of Kerala. His mother pats his head and comforts him: “I promise you are going to see something better than cartoons.”

In May 2013, when theatre and film artist Sanjana Kapoor expressed concern that theatre was a dying art in India, her concern was taken seriously. But as I stand staring at the swarm behind me, I beg to differ.

Deepan Sivaram, artistic director of ITFOK, always breathless from flitting between open air auditorium, tent and dais, offers some figures. “The event was planned with a maximum capacity of 700. During registration, we increased the bar and made it 830. But look around: the crowd at any given time is more than 3,000.” He has no satisfying answer for why that is.

In an essay on ‘The Future of Theater’ for Harvard Magazine, Craig Lambert makes a prediction: ‘The theater of the future will be one that actively engages its audiences and probably breaks not only the “fourth wall” (the imaginary “window” of the proscenium) but the other three as well.’

It strikes me that ITFOK is the theatre of the future.

There is even a show where audience members are encouraged to keep their smart phones switched on: C Sharp C Blunt, a play about the making of a smart phone app called ‘She’, which explores what it means to be a professional woman in India’s entertainment business.

“Why spend time and money on theatre when you have easier access to films? It is entertainment that matters,” a friend said when I invited her to the festival. As I watch C Sharp C Blunt, I mentally compose a reply: ‘Cinema cannot interact with you. You may dance to a movie song, but can you get on stage with Katrina? Here, you can.’

Bartosz Szydlowski, the Polish director of Bath New Theatre in Krakow, stood to make his point in the small colloquium at the Kerala Sangeet Natak Akademi in Trichur: “Curators of contemporary theatre festivals should focus on making the audience a subject of their artwork rather than treating them as passive consumers of a particular product.”

Oliver De Sagazan, a French theatre artist, is known for his unique combination of sculpture, painting and performance. Facing us under a spotlight, his smile disintegrates as he closes his eyes and, in a well-rehearsed way, moves his hands over his face and hair—his canvas. Though most of us are spellbound, somewhere in the front row a child throws his head back and lets out a stream of uncontrollable laughter.

Every move Sagazan makes is accompanied by an annoying flash of a camera in the audience, but he doesn’t complain. He is amused. To him, the flash is evidence that the audience wants to capture his transfiguration. Anuradha Kapoor, former director of the National School of Drama, agrees that enthusiasm matters more than ettiquette. “If they hoot or clap, that is because they enjoy the performance. I do not think we need a stiff audience [of people] who have to curb their instincts. There is nothing called an ideal audience.”

Renu Nair is one among hundreds who could not see Sagazan’s show. She is disappointed. It is her first time at a theatre festival. Indeed, most of the Malayalees I spoke to at the festival hadn’t seen so much as a Kootiyattam performance since their childhoods.

Kootiyattam is a 2,000-year-old form of theatre—the only surviving sample of the Sanskrit theatre in all of India. There was a time when every family in Kerala would carry straw mats and pillows to the temple grounds during festivals to watch Koottiyattam performances that ran into the early hours of the morning. I ask my mother whether she understood any of the Kootiyattam she saw as a child—it being in Sanskrit. Over the years, she said, she had learnt to comprehend and enjoy it.

Perhaps theatre is an acquired taste. And a festival helps people acquire it.

Hilum is performed in the garage. I am on the floor and it is dark. There is silence as everyone waits for the show to begin. I am reminded of the final lines of a Raymond Carver story: ‘I could hear my heart beating. I could hear everyone’s heart. I could hear the human noise we sat there making, not one of us moving, not even when the room went dark.’

As I exit the festival, I notice something small and round near my feet. It’s a head—a Ben 10 toy head. I look around for the kid to whom it belongs, but I have a feeling he doesn’t need it anymore.