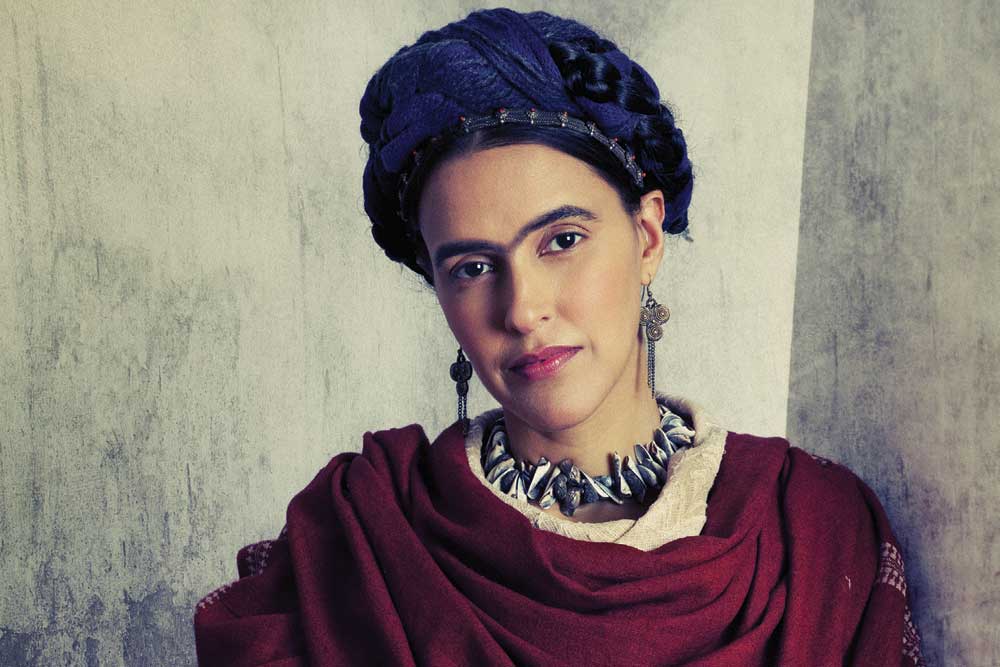 IN THE BEGINNING of civilisation, there was religious and ritualistic iconography of gods, animals and demons—complex and awe-inspiring, changing according to country, culture and custom. Gradually there were portraits of kings, queens, despots and conquerors, some taken to a god-like status, remote and far-removed from all around them, striking wonder and terror in their subjects.

Portraits were grand, made in mosaic, stone, bronze, stained glass, tempera on hidden walls, and large oil-on-canvas paintings that glistened with sword, armour and heroic action. There are pre-historic portraits of man confronting wild nature in silent caves, funerary images on encaustic coffins bearing the likeness of the deceased, devotional friezes like Emperor Justinian offering myrrh to Jesus in a glittering mosaic in Ravenna, historic portraits of Napoleon crossing the Alps on his horse, wind and fury swirling around him, dramatic and unforgettable ones as Aristotle With a Bust of Homer or Death of Socrates. And who can forget Mona Lisa’s smile and Van Gogh’s haunted eyes?

Portraits with several interpretations and reasons for existence have obsessed mankind, bringing out the creative imagination in many ways, altering methods, materials and mediums in order to achieve the desired effect.

Academic realism with its fine detail and perspective, popular for centuries, was tossed aside in the early 20th century. The search for a new meaning in face and figure brought in Paul Gauguin’s vivid and sensual paintings, Picasso and Braque’s disintegration of the image, Oskar Kokoschka and Egon Schiele’s expressionism art, Edvard Munch’s hair-raising scream and so much more.

Photography slowly evolved around the mid-19th century, documenting historic moments, personalities, architecture and anything else that was worth the while. It was able to do with just the click of the camera what a painter painstakingly took months to achieve—or so it appeared to those fascinated by the new invention. But at that time it had a different quality altogether and did not belong to the realm of art.

Photography started occupying artistic space and a new genre was born. Lee Miller, Man Ray, Marcel Duchamp and others tweaked straight forward photography and took it to a sphere different from reportage and documentation. They played with solarisation and clever surreal images that kept pace with art movements prevailing in Europe then.

Photography has since found a artful way of acquiring the seriousness of a creative form, with images absorbing metaphors, layers of meaning while manipulating colour and black-and-white in a different sort of way. The digital camera too made the impossible possible.

This is where Rohit Chawla steps in with this exhibition of multi-layered, multi-dimensional photography. He takes as inspiration paintings of three artists and a group of Indian miniatures all of which display their own kind of boldness, tactility and mood assertion. Chawla’s photographs do not remain photographs because they are slowly studded with accessories both visually and physically. They are mounted with props and trimmings relevant to the picture. Chawla creates an illusion of the original painting while bringing in his own unique touches. In this combination of paper, cloth, paint and diverse decorative elements, he is assisted by Manoranjan Mukherjee, the magician behind the scenes, who turns illusion into established fact.

It is quite possible to understand why Chawla was drawn to the paintings of Ravi Varma and then redefined them in his own special way. Ravi Varma painted mythological and history paintings as well as portraits of royalty and the aristocracy. But the paintings he made of apsaras, courtesans and the nayika—the ideal woman engaged in diverse activities have—always had great pictorial appeal. Endowed with great charm of face and figure, dressed in clothes that enhance their allure, Ravi Varma’s paintings of such nayikas are collectors’ items and the inspiration for Chawla’s compilation.

Rohit Chawla creates an illusion of the original painting while bringing in his own unique touches in this combination of paper, cloth, paint and diverse decorative elements

Gustav Klimt (1862-1918), lived in Vienna at a time when wealthy and highly sophisticated Jewish families dominated the city. This was also a path-breaking period in the history of scientific and medical advancement, even though Sigmund Freud is among the very few whose name is in circulation today. Klimt had Jewish families as his patrons and friends. He also interacted closely with the scientific community of Vienna who introduced new trends in biology and anatomy to Klimt. The knowledge he gained about the fertilisation of a single human egg which then develops into a foetus before emerging as an infant became intrinsic to the pictorial development of his work. His excessively ornamental work of whirls and curlicues was symbolic of primordial matter always developing and dying, always in motion, always mutating.

It was in such an enriched Vienna that women tested their intellectual and sexual equality with the men of the academic, artistic and social milieu of this city. Using the bold and stylish Viennese socialite as his inspiration, Klimt altered Judith, the much admired, patriotic and courageous heroine of Jewish folklore, into a dangerous and bewitching woman, irresistible to men. Judith, like many paintings to come, glitters with gold — hard and alluring. Motifs of sperms and embryos decorate the clothes and background.

Chawla’s Judith, glittering with patterns and motifs, looks straight into the camera and emanates the necessary sexual appeal. She holds the head of Holofernes, her enemy whom she has assassinated. Chawla and Manoranjan Mukherjee, his assistant, have worked with great imagination on the stiff gold paper and the decorative elements that cover Judith and the other works.

The Kiss is the union of Adam and Eve, of Klimt and his beloved Emilie Floge, and the starting point for sperm to unite with the fertilised egg.

No one more than Frida Kahlo (1907- 1954), the Mexican painter and wife of Diego Rivera, could have painted her traumatic life with greater intensity and capability. A tram accident at a young age broke several bones in her body and irrevocably ruined her back and pelvic girdle. She was doomed to be childless, and often spent long periods in a plaster cast racked with pain and despair. But as she lay in bed, she became her best subject, reflected in a mirror placed above the bed. When times were good she dressed in her colourful Mexican Indian skirts, loaded with vibrant jewellery, hair caught up on the top with flowers and ribbons. She married Diego Rivera the painter and loved him intensely despite his many infidelities. She retaliated with several bi-sexual love affairs. Kahlo was also strongly political and died young because of her many ailments.

Similar to what Chawla has done with Ravi Varma and with Klimt, he takes paintings of this woman and converts them into a medium that he has made his own; a three-dimensional photomontage with different contributions to it — the Kahlo image and his creative response, dusted over by his photographer’s interpretation.

The choice of clothes, jewellery and hairstyles throughout the Frida Kahlo series has been constructed by the designer Sabyasachi. He has blended the Mexican sartorial style Kahlo loved with our own Indian prints and clothing to bring about a colourful, harmonious mix.

Self-Portrait with Cropped Hair, painted in 1940, is the rejected, unloved Frida. She shrugs off everything about her that Diego Rivera loved—her bright Mexican skirts, her vivid appearance and her long hair dressed with flowers. In Chawla’s photograph, the floral suit and background strikes the difference to the sameness, making this difficult work one of great visual appeal.

The men in the miniature series— Aman Nath, Dadi Pudumjee, Tarun Tahiliani and the late Francis Wacziarg— have immersed themselves in the ‘physique du role’, understanding the physical and mental sense of the role they are playing. All of them appear to have, with great elan, slipped into the ‘king for a day’ feeling, surrounded by accessories and accoutrements that are so intrinsic to the nobility they portray, enjoying the lavish costumes designed by Tarun Tahiliani.

(This is an extract from the introduction to ‘The Inspired Frame’, the book of a show of Rohit Chawla by Tasveer)

Rupika Chawla
Rupika Chawla is an art conservator and author of Raja Ravi Varma: Painter of Colonial India. She is presently working on a book about the Ajanta caves