The masterpiece of OV Vijayan gets an innovative stage adaptation 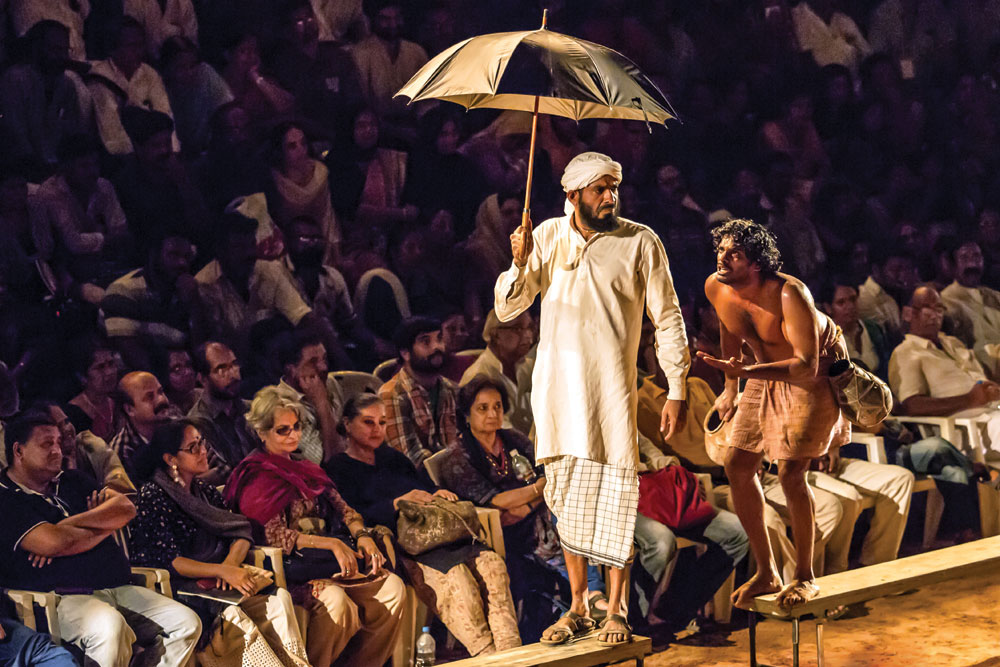 ON THE SURFACE, the village of Khasak, modelled after Thasarak, not very far from Palakkad, Kerala, where OV Vijayan lived when he began his masterpiece, appears Edenic. The paddy fields are lush and emerald green, coconut palm trees sway in the gentle breeze, quaint tea shops, like tea shops everywhere, become the centre of the people’s social interactions and the villagers are ‘in no hurry’. ‘Theirs was another Time, the duration of faster-than-light tachaeons come home to rest,’ Vijayan writes in an afterword to the English translation (which he did himself in the 90s) titled The Legends of Khasak.

But just below the surface of this ideal is a social structure made precarious by the changing political scenario of the 60s when the Malayalam original Khasakkinte Ithihasam was written. It is a society that is at the mercy of individual eccentricities, shifting loyalties and desires that become sins when acted upon. These complexities are what director and scenographer Deepan Sivaraman strives to resolve on stage in his adaptation titled ‘The Legends of Khasak’, a three-and-a half- long hour long performance that was staged in Bengaluru recently. He mostly succeeds; the nitpicking I am tempted to do is because of the complexity of Vijayan’s debut novel and has less to do with the skill of any director who is brave enough to pick up this particular text.

There is no fixed storyline or timeline for the events that transpire in Vijayan’s Khasak. It must be around a few decades, because deaths and births are aplenty. Nothing ‘happens’ as such. But here, in Khasak the village, the past merges with the present, the living with the ancestral, the shamans with the commoners and myth with the real to whip up a concoction of unsettling scenarios and days that can best be described as imbued with magic realism.

Ravi, a college drop-out, trying to run away from the guilt of an illicit relationship with his step-mother, opens the play, as he does the novel, when he comes to Khasak to run a single-teacher school. Over the coming years, he meets the villagers, who carry a wealth of ritual, myth and eccentricity. He is first witness to and then participant in the many complex layers of these people. The play follows the lives of this handful of characters as they live, love, hate and die. Even when their interactions with each other are peripheral, they are still bound by the strangeness of legends, dreams, fantasy and the magic that colours the past and predicts the future of their village. In following their lives, the play mirrors the novel by showing how these characters can neither find respite from the influence of the spirits that make the Khasak countryside their home, nor quell the demands of reality satisfactorily.

With no set story and nothing ‘happening’ in the course of the narrative, visualising the novel as a play seems foolhardy. The non-linear narrative is a perfect choice for Sivaraman, who has directed several such storylines in his two-decade long career. By staging Khasak in an open arena, and using the elements of fire, air and water, and the senses of smell and touch, Sivaraman creates an immersive experience. By stretching the limits of the proscenium, he ensures his audience is participative.

THE LEGENDS OF KHASAK CHANGED THE DIRECTION OF MALAYALAM LITERATURE AS IT CREATED A NEW PERSUASIVE LANGUAGE, BLENDING MYTH, MAGIC AND REALITY IN WHAT WAS THEN AN UNPRECEDENTED ATTEMPT IN MALAYALAM

We meet Madhavan Nair, the village tailor by day, Ravi’s drinking buddy by evening, who invites a member of the audience to measure him for a shirt. When the beautiful and troubled Maimoona gets married to Chukkru, at the insistence of her mullah father, Allapicha, a few front row members of the audience are served traditional Mappila food. The talc and perfume Chukkru is sprayed with, while being dressed up for the wedding, wafts through the air. We meet Nizam Ali, an orphan-turned- beedi-seller-turned-qazi-turned-self-appointed- representative-of-Sayed Mian Sheikh, the ghost of an infirm horse that gallops with the east wind in the valleys of Khasak. We meet Appukkili, the village idiot, who hunts for spiders and dragonflies that have wings as light as air. We also meet students of the school Ravi mans, a toddy tapper, the headman, the women who affect each other’s lives and build more layers to the myths of Khasak. We follow their trajectories, choose favourites, as spirits rise from the paddy fields, and arrack flows free, as do passions.

Life-affirming fire is a constant element in this play. The choott, a makeshift torch made by lighting a handful of palm fronds, is another regular feature. These fires though signify death. The use of puppets is frequent as well. They are large, sometimes grotesque, and do what the characters themselves are ashamed of doing. Perhaps by projecting their deeds onto a puppet, characters hope to be reprieved of the inevitability of their sins. But death, even that of the puppets, is never absent. Everything and everyone is long dead, everything now is mere flashback. The whole play is an unearthing.

Vijayan’s The Legends of Khasak changed the direction of Malayalam literature as it created a new persuasive language, blending myth, magic and reality in what was then an unprecedented attempt in Malayalam. Such remains its significance that people classify literature in Kerala as before and after Khasak. It is not a text that can be easily forgotten. Given its influence on readers and the complexities it encompasses, any attempt at a visual adaptation comes with many perils. Sivaraman’s ‘The Legends of Khasak’ remains mindful of these challenges and concentrates more on being an immersive experience, and less on depicting the nuances of the novel faithfully, as they are. It is in recognising the limitations of this visual medium in bringing alive a village as strange as Khasak that the play succeeds in being an ‘experience.’ 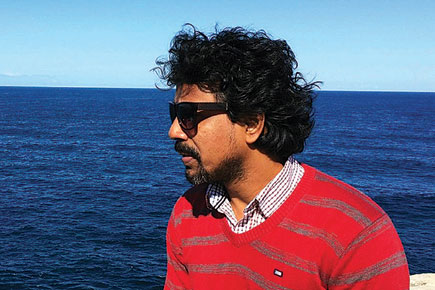 DEEPAN SIVARAMAN, the director of ‘The Legends of Khasak’, is associate professor at Ambedkar University, New Delhi, and founding artistic director of Oxygen Theatre Company, Thrissur. Winner of the Mahindra Excellence in Theatre Award (META) and Kerala Sangeetha Nataka Akademi Award, his other notable works include ‘Spinal Cord’, ‘Lord of the Flies’ and ‘The Cabinet of Dr Caligari’. In an interview with DEEPA BHASTHI, he talks about the significance of fire, and why he doesn’t believe in the binary of an actor and non-actor. Excerpts:

The use of fire is very extensive in the play. Does it have a ritualistic meaning for you?
There is an undertone of death in the play. The dug-out stage is conceived as an excavation ground, where by taking out the soil, life, culture is unearthed. When the actors come out of the box, they are coming out of their grave. When we went to Thasarak, there was a new culture there. We had to unearth that to find the culture Vijayan wrote about. Also, Theyyam is a celebration of ancestors, of the dead. The stage is constructed like the ritual ground, with benches around it. And fire is fundamental. The snake that Ravi carries is a skeleton of a snake. The puppet that represents Ravi’s step-mother is a skeleton from the waist down. When people come out of the box, they are coming out of the grave. Everything is dead, and the unearthing of the dead is how the play is conceived.

What made you choose such a complex text to work with? Magic realism isn’t the easiest genre to adapt for stage.
I am a big fan of Latin American literature. I have never liked linear narratives. The possibility of imagination is more in complex narrative structures. Many layers of visuals are possible. The complexity of narrative takes the audience’s imagination here and there. It also gives them the possibility of making a narrative themselves. I have looked for material around the world. I read Khasak 20-23 years ago; a text like that sticks with you. It is a complex novel and you don’t want to burn your hand by picking up something like this. The use of puppets, scenography, etcetera, is something I have been experimenting with. My language has perhaps became mature enough to tackle this.

Why did you use people from Trikarupur as actors in the play? (Trikarupur in Kasargod district is where the play was first produced in 2015.)
I have a little problem with the word ‘non-actor’ and ‘trained actor’. I have trained my actors for five months. What matters is whether they can act or not. I don’t believe in the binary of an actor and non-actor. If I didn’t tell you they are non-professional actors, you wouldn’t know. What matters is how dedicated they are. The life of subaltern people is complex, there are no simple answers. A city actor may not understand the complexities of these lives and will do a job of acting.