On a Wider Canvas

Exhibitions to mark in your calendar 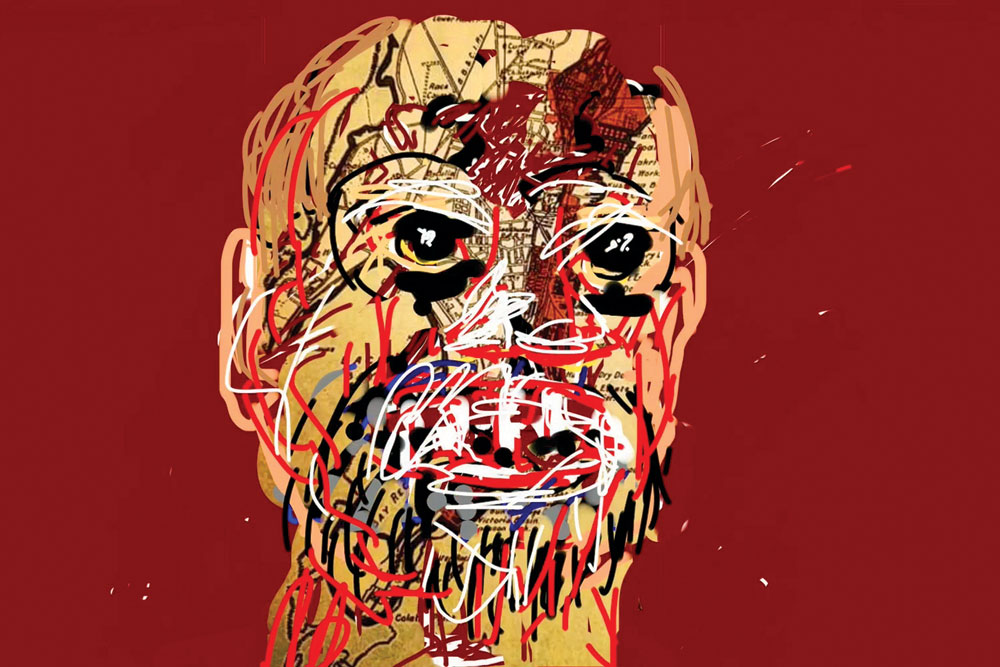 FROM Mrinalini Mukherjee’s eccentric organic sculptures—to Pakistani artist Salman Toor’s Indian debut; there is much to look forward to in the coming six months.

Nasreen Mohamedi, a brilliant abstractionist, died at the age of 53 in 1990 from Parkinson’s disease. She left behind an oeuvre (spanning three decades) that is belatedly being recognised for its prolificacy today. Many of her drawings were discovered after her death, in her studio apartment, along with her diaries.

The expression ‘less is more’ finds its home in Mohamedi’s minimalist, monochrome artwork. Her drawings— finitely measured strokes and asymmetrical grids made using pen and pencil—were dynamic and intense in form. They were in rebellious defiance to the art that was being produced during her time and much after it. In the 1980s, she began working more and more in isolation—the disease made her a recluse and weak—but she never strayed from her commitment to her practice.

Here, it is Still at Chatterjee & Lal celebrates Mohamedi’s artistic odyssey— from ‘two small drawings and one collage’ that date back to 1960s (her formative years as an artist), to ‘the ever-increasing economy of line evident through 1980s’. This breath-taking display holds Mohamedi’s spirit in its truest sense.

RANJANI SHETTAR at The Phillips Collection
Washington DC, till 25 August, 2019

Ranjani Shettar’s artworks often have an uncanny characteristic of levitating. Dreamlike and otherworldly, these delicate works have a certain poetic element to them. Take her latest work, Mohana (2019), which is a part of the exhibition, Earth Songs for a Night Sky at The Phillips Collection. It’s a multihued web-like form, developed using thread and hand-moulded beeswax. Mohana is an installation so striking that weaving it in-situ with measured precision, could be called a work of art itself.

A large part of Shettar’s practice hinges on exploring environmental concerns. Unsurprisingly then, she sources natural materials such as teak and rosewood, lacquer, wax and organic pigments like indigo, to give form to her works. Shettar painstakingly hand carves her wooden sculptures and submits herself to the traditional methods of dyeing as well. Often, she juxtaposes the natural materials against industrial elements like stainless steel to subtly push the viewers to reflect on urban, industrialised settings.

Twelve years ago, Bengaluru-born Shettar picked up her belongings and planted herself in the village of Sagara in Karnataka, allowing the natural neighbourhood to inspire her. At The Phillips Collection, Shettar’s works are meant to converse with Russian artist Wassily Kandinsky’s book Klänge (Sounds) encompassing poems and woodcuts, as well as seminal paintings made by the late Swiss-born, German artist, Paul Klee.

MRINALINI MUKHERJEE at The Met Breuer
New York, till 29 September, 2019

It’s been four years since the death of this fearless artist. It’s only fitting therefore, that a mammoth retrospective, elucidating her career trajectory and showcasing her magnificent oeuvre, be held on an international platform. Titled Phenomenal Nature: Mrinalini Mukherjee, it’s the first retrospective of Mukherjee in the US.

Of late, The MET has increasingly panned its lens towards South Asian artists, featuring the works of Nasreen Mohamedi, Krishna Reddy, Zarina Hashmi and Huma Bhabha. For this particular retrospective, The MET Breuer has culled 57 artworks from various galleries and museums, to build a portrait of Mukherjee’s brilliance. Daughter of a powerhouse couple, artists Leela and Benode Behari Mukherjee, her own practice was influenced and immensely manoeuvred by her mentor, KG Subramanyan, a Modern great. Mukherjee’s minimalist art—original and idiosyncratic— has always been way ahead of its time. At the museum, her unconventional and sensual sculptural creations, made of knotted and dyed hemp are on display, alongside her ceramic works (a medium which she began exploring in the mid-90s’) and bronze works (post 2003).

Rana Begum is the queen of manipulating and controlling spatial perceptions. You might find yourself engulfed by a strange sense of calm when you look at her works. Take for instance, No. 814 that is currently on view at the Frieze Sculpture Park in London. It’s a beautiful and fragile unit of five vertically upright, coloured glass plates that cast polychromatic shadows on the ground. Another work, a family of pastel-hued, square meshes that softly blur into each other, create an optical illusion.

For her new exhibition at Jhaveri Contemporary in Mumbai, the artist returns to presenting an extension of her monochromatic series, Floats. It’s a step away from her otherwise multihued body of work, but it retains her characteristic minimalist appeal. The series features a motley crew of shapely, rotund marble objects, arranged together in a meticulous fashion. Through these objects, Begum explores the interplay of surface and light. ‘The material I am using has the ability to absorb and reflect varied densities of light, creating an experience that shifts, sometimes dramatically, with the movement of the viewer,’ she explains.

For this exhibition, Begum will be making new paintings and will work with fish nets to create a site-specific installation within the gallery.

There is a palpable darkness to Jogen Chowdhury’s drawings. Wide-eyed figures with broad lips and vacant expressions often inhabit his canvases. In 2018, 15 of his drawings, unique in form, were exhibited at the India Art Fair in Delhi. In this particular series, isolated human figures displaying their naked bellies and bare bosoms fill the mounted frames. Their skin, a pale hue of beige, is covered in cross-hatched marks. These figures, sometimes bored and despondent, appear to be caught in a private thought, tucked comfortably in the privacy of their rooms, removed from the happenings of the world outside. Are they here by choice or are they prisoners of exile?

One of the more arresting drawings is of a woman staring at a human skull placed in her palm. Her ghostly white hair is tied into a tight bun revealing her large temple; her kohl-lined eyes evoke a strange sense of darkness. It’s eerily reminiscent of a scene from Shakespeare’s Hamlet. Another drawing is of a fragile, androgynous figure whose unclothed body is folded in supplication, perhaps in fear, before an unknown entity.

Each character relays Chowdhury’s interpretation of a vulnerable, yet depraved modern world, where greed and arrogance take precedence. In Kolkata, Emami Art gallery will celebrate the artist’s seven decades in the field, and the show will be curated by art critic and cultural theorist, Ranjit Hoskote.

Nikhil Chopra is a fierce exhibitionist. Using an ensemble of costumes, wigs and props, his body serves as a canvas, which he dresses, paints and transforms into multiple artworks. Chopra has often used his practice to challenge perceptions of gender, identity, nationhood and race, by shape-shifting through a gamut of self-made, fictional characters. Personal history and collective memory have been his points of reference. His practice is boundless: slipping seamlessly from performance theatre, to photography and painting, to large-scale drawings and sculpture.

Chopra is the first contemporary artist from India to be The MET Breuer’s artist-in-residence. In September, within the gallery walls, Chopra will hold a durational performance for eight consecutive days. Through Lands, Waters and Skies, he will examine the ephemerality of nature. As part of his performance ritual, he will embody different personas, engage with The MET collection and make large-scale drawings. It is partially inspired by his childhood memories of summers spent traversing the lush landscapes of Kashmir’s Pahalgham with his grandparents, where they once lived. ‘I want to understand the mysteries of what is up beyond the mountain pass, and down in the depths of the ocean,’ he writes in his artist statement.

Bharti Kher’s artworks often have an unspoken hold over their spectators. From The Skin Speaks a Language Not its Own (2006), a life-size fiberglass replica of an elephant covered in a constellation of bindis (her signature motif), to Six Women (2018), a silent row of plaster casts belonging to the bodies of marginalised sex workers—a viewer can at once be struck by the singularly powerful presence of these works, and later, be consumed by the gravity of their layered meaning.

Kher’s repertoire is rooted in the physical, the scientific and the mythical. The exhibition at Hauser &Wirth Somerset this year, will showcase a new, suspended sculptural piece called A Wonderful Anarchy—an orchestrated compendium of indigenous objects handpicked by Kher during her travels, secured into a large wooden pillar.

A new bindi work titled, Algorithm for Time Travel (2019) will be unveiled, while a 11-foot-tall, hybrid figure in bronze (reminiscent of Kher’s Intermediary Family at Frieze Sculpture Park last year), will be placed at the gallery’s entrance. On view will also be a collection of drawings titled, The Whole is Greater, which were produced by the artist during her residency in Somerset.

A feminist stalwart and the recent recipient of the Joan Miró Prize, Nalini Malani has always been an artist of great reckoning. Her multidisciplinary oeuvre is exhilarating yet contemplative, dark yet luminous, dynamic yet nuanced. The last two years served as pivotal milestones for Malani, where her immense body-of-work was celebrated as a two-part retrospective at Centre Pompidou, France (2017), and at Castello di Rivoli Museo d’Arte Contemporanea, Italy (2018).

In October, Malani returns to Max Mueller Bhavan—an institution she has shared a long history with—to celebrate its 50th anniversary. It was here that the artist conceived two landmark projects— Medea in 1993, and subsequently, The Job in 1997. Both of these projects had an immense impact on her career and steered her towards unequivocal brilliance.

For the upcoming exhibition at Max Mueller Bhavan, Malani will create a new video installation, which is still under wraps. Also on view will be a rare, never-seen-before video work. It was made by Malani—a young, aspiring artist in her early 20s in 1969—as part of the Akbar Padamsee’s Vision Exchange Workshop (VIEW). At that time, Malani, who was the only female member of the creative initiative, worked with 8mm and 16mm films. It would be a visual delight to compare this video work to the present-day animations Malani has been creating on her iPad, which she has been diligently posting on Instagram.

Emerald greens, mustards, brick reds and tangerine. Pakistan-raised, New York-based artist, Salman Toor’s vivid paintings have an enigmatic draw, which makes it seemingly impossible to pull away from them. Toor’s artworks, often autobiographical and complex, reveal his twin identities. He oscillates between two incongruent cultures: New York, where he can love uninhibitedly; and Lahore, his family home, where he must pay heed to the orthodoxies of family and religion. Toor’s illustrated scenes, often populated with brown men characterised by peculiarly long noses, seem to be plucked from a melange of reveries, memories and fantasies.

Through his paintings, Toor creates an animated universe of queer experiences— like in the Eleventh Street (2018) which depicts two hopeful lovers, locked in a silent, tender gaze, while the world passes by, oblivious to a romance taking root. Or, in Palm Reader (2018), which not only depicts two economic classes colliding, but relays a poignant intimacy shared between two individuals through quiet gestures. It’s a strange sense of voyeurism that Toor invites us to partake in.

This is the first time Toor’s work will be on view in India and he is creating new works for this debut.

On a Wider Canvas