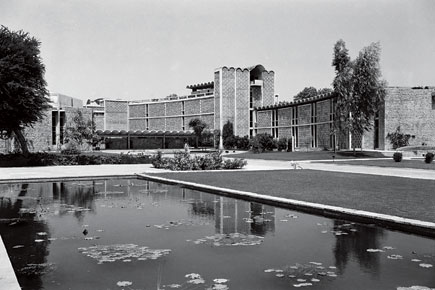 
There is something for everyone in Delhi Modern: The Architectural Photographs of Madan Mahatta, currently running at Photoink Gallery. Architecture buffs can admire the black-and-white pictures of Delhi landmarks—Pyare Lal Bhavan, IIT-Delhi, the LIC and NDMC buildings, and the Baha’i temple—from the 1960s through the 1980s, when they were new or semi-minted icons. Design mavens can gaze upon the elegant drawing rooms where the now-ubiquitous FabIndia chic first took shape. And nostalgists and premature golden agers can get transported to a calmer, slower, strangely unpeopled Delhi, light years away from the messy realities of the current-day megalopolis.

As Delhi nostalgists will tell you—preferably over anachronistically priced continental breakfast at the India International Centre—before Delhi was taken over by the ‘architectural amorality’ characterised by the theatrical exploits of wily ‘façade artists’ like Hafeez Contractor and Raja Aederi, there once was Delhi Modern.

The impetus to bring it into existence came in 1948, when the nation’s first Prime Minister Jawaharlal Nehru had to build new infrastructure for the capital of newly independent India. Unlike the space-age stalactites and robots of utopian Soviet architecture, which look like aged artefacts from the future, the drive to build in Delhi didn’t follow a revolution, but Independence, which was more ‘in the nature of a transfer of political power’, AGK Menon argues in his essay The Contemporary Architecture of Delhi: A Critical History. ‘Architects had no cause to rebel against,’ he writes, ‘and therefore, there were no ideological grounds to seek architectural transformation.’

This might have accounted for the unconflicted ease with which the new administration reoccupied the British-built Indo-Saracenic Imperium on Raisina Hill, and the still-persistent allure of Lutyens and Baker-style ostentatious monumentalism. Nevertheless, state agencies still needed to build new public institutions, commercial centres and housing projects.

Enter the creators of Delhi Modern: Habib Rahman, who Nehru shifted to the Central PWD from the West Bengal PWD; Achyut Kanvinde, who had worked with the Council for Scientific and Industrial Research until he set up his own private practice in Connaught Place; and Joseph Allen Stein, who left his teaching post in Calcutta’s Bengal Engineering College to set up a private practice on Asaf Ali Road. As Rahman’s son, Ram Rahman, the exhibition’s curator, writes in Photographing Delhi’s Architecture, the edifying essay that accompanies the show, ‘These three architects were all US-trained and brought with them the influence of the European Modernist movement via their American education. Rahman and Kanvinde had studied under the Bauhaus master Walter Gropius at Harvard and MIT. Joseph Stein had influences of Richard Neutra and The Saarinens.’

To a landscape dotted with remnants of imperial grandiosity and newer overwrought Revivalist statements, they brought buildings constructed according to Modern principles. These were confident, austere forms with airy, open spaces and a visual emphasis on vertical and horizontal lines. They had minimal adornments, aside from those that were dictated by structure, function and the industrial material used, such as exposed brick or cast concrete.

Mahatta’s photographs include all the classics among these. Among others, Stein’s Ford Foundation Office, the American International School and Escorts factory. The latter, which resembles a whitened honeycomb when glimpsed from above, is also viewed from the factory floor, lit up by natural sunlight which streams through geometric roof trusses as intricate as origami. Then, there’s the IIC (1962), a masterpiece of Modernism adapted to local references and climate, with its ponds and courtyards. An image of a half-constructed Pyare Lal Bhavan (1962) shows Kanvinde’s elegant functionalism slowly taking shape. Another image shows the imposing majesty of Habib Rahman’s Hindustan Times building, with trees and diminutive neighbours sunk in its shadows.

The photographs also introduce us to the designers whose wall hangings and sofa sets complemented these modern buildings—Mini Boga’s elegant teakwood chairs with seats of woven rope and jute, and Santiniketan-trained, Marimekko-apprenticed Riten Mazumdar’s silk-screened and woodblock-printed hangings and bedcovers, boldly and simply patterned with Brahmi, Devanagiri or Bengali script. They allow us a glimpse of the social milieu that these buildings and minimalist interiors emerged from. One image from 1975 takes us back to an elegantly appointed living room in which FabIndia founder John Bissel is seen seated next to Shona Ray. Bharati Sharma, who sits on the banded woven rug beside them, is a personification of this elegance in a sleek chignon and a plain but lustrous handloom sari.

Social access afforded a distinct advantage to the chronicler of this milieu. Mahatta, like the architects whose work and homes he photographed, was also trained abroad, at the Guildford School of Arts and Craft in Surrey. He returned to Delhi in the mid-50s to set up his studio in Connaught Place, right around the time architects like Rahman, Kanvinde, Stein, and JK Chowdhary began work on the capital’s modern face. Then, he was the only photographer here who worked with a Linhof camera on medium format film, with a very wide-angle lens.

Ram Rahman explains his technical attributes: ‘Exploiting all the tilts and shifts of the camera, he was able to make his pictures with undistorted perspective, and the wide lens enabled him to shoot in tight areas and capture the sense of space within these structures. He also understood the importance of light as it shifted over volume and form. […] His clean and clear modernist vision perfectly matched the modernist architecture that these architects were evolving in Delhi.’

Mahatta often accompanied the architects to the sites, and benefited from their insight into the best time of day or year to photograph the buildings. In Rahman’s words: ‘He happened to be the right photographer present in the right place at the right time.’

This intimate access made his images exceptional, as both documents of urban history, and close-range portraits of the creators of this history. Many of Mahatta’s photographs show us the habitats of the creators of Delhi Modern: Kanvinde in his airy abode, with flying staircases and walls of exposed brick and rough cast concrete; Riten Mazumdar’s residence, designed by Charles Correa; Ranjit Sabhiki’s home, with gleaming Kota stone floors and large glass windows. One particularly fine picture shows Stein walking up the Ford Foundation building stairs, with his pale bald dome echoing the gleaming pendant lights that dangle down the stairwell.

This sense of intimacy is reflected in the elegiac closing lines of Rahman’s curatorial essay: ‘These building projects and the photographs are a vivid reminder of a time when the government and the political class still believed that architecture has a symbolic and extremely important part in creating and physically embodying the visionary dreams of a new nation aspiring to build a democracy with Indians.’ In contrast, he continues, ‘not a single structure built for the enormously expensive Commonwealth Games was designed by an Indian architect’, and the architecture of ‘the newest of Delhis’, Gurgaon, ‘is probably the crassest example of the physical manifestation of corporate greed and its globalised multinational ambition, so clearly visible in its buildings’. In other words, the architectural history of Delhi, which spans ‘the civilisational traditions of several historical periods: the Tuglaqs, Sher Shah Suri, the Lodhis, the Mughals, the British, down to the Moderns’, may well have ended there.

Anyone who has visited the hypertrophic spire-loving Gurgaon, or the National Capital Region’s suburbia-spawning suburbia is sure to sympathise with such a view. But there’s a twinge of elitism in the way Delhi Modern’s admirers speak of and inhabit the prelapsarian wilds of gentility, like the IIC or Ford Foundation office.

As the anthropologist Arjun Appadurai has it, such spaces are burnished by a certain “patina”, “the gloss of age”, which “credentials the ‘right’ people, just as it threatens the way they lived”. Colonial clubs, palaces with gilded chairs, chandeliers and mouldy tiger pelts staring out of their walls, and Delhi’s modern architecture all have one thing in common. Thick with patina, they signal a way of life that’s disappeared forever.