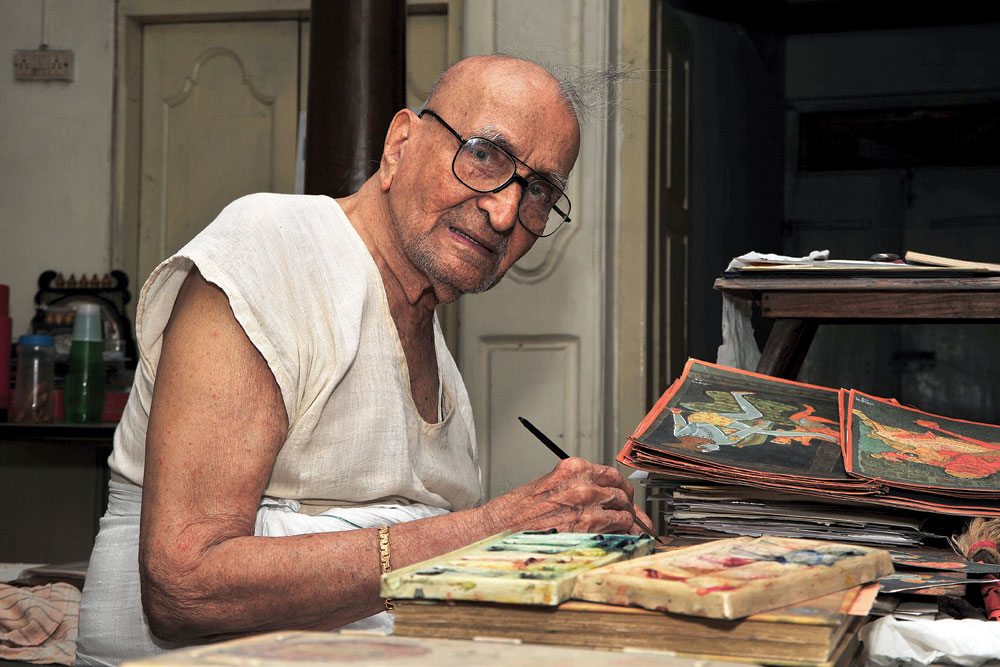 THOUGH THE Trinity of south Indian art music— Tyagaraja, Muttuswami Dikshitar and Syama Sastri, the iconic 18th century composers of hundreds of weighty songs, most of them in praise of the divine—are revered by every practitioner of the art, we have no authentic pictorial representations of them. Their lives predated photography, and their portraits, if any, did not survive them. Yet, paradoxically, their pictures, often seen together—are instantly recognised by artists and aficionados alike in countless music halls, in the puja rooms of homes, even temples, courtesy the brilliant brushstrokes of the polymath S Rajam (1919-2010), musician- guru-musicologist-painter extraordinaire, whose painstaking research led to his life-like depiction of the Mummoortis with no detail spared.

The name Rajam is more common among women than men. A couple of names stand out among women in Indian classical music, those of N Rajam, the Hindustani violinist, and the late Rajam Pushpavanam, a talented vocalist and daughter of the celebrated vidwan Madurai Pushpavanam Iyer. S Rajam was the quintessential renaissance man of 20th century south India, born to advocate and connoisseur of music V Sundaram Iyer and Chellammal on February 10th, 1919 in a home suffused with music.

Sundaram Iyer, who could play the veena, was Rajam’s first guru. Unusually for a boy of his Brahmin background, where obedience to your elders was the norm, Rajam had a mind of his own even as a child, and was allowed to exercise his options. Keen to develop his strong voice, he chose singing over veena-playing in early boyhood. In a household always resonating with the temple bells of the historic Mylapore Kapaleeshwarar Koil nearby, and the music concerts his father arranged in an upstairs hall of their two-storeyed house, Rajam grew up surrounded by music offered by many of the professional artists of the day who lived on the streets bordering the temple.

He progressed rapidly enough to give his first All India Radio concert at the age of 13. The Madras station had opened just the day before, with DK Pattammal performing for the inaugural concert broadcast. Rajam’s was the second programme.

Great musicians like Ariyakudi Ramanuja Iyengar and Maharajapuram Viswanatha Iyer performed at the Sundaram Iyer home. Papanasam Sivan, a singer and composer whose songs for Tamil cinema would one day find their way to the Carnatic music concert platform, and earn him the title Tamil Tyagayya placing him on a pedestal alongside the Trinity, actually moved in for a while to assume the role of resident guru for eldest son Rajam and his sister Jayalakshmi, even as the youngest, child prodigy Balachander, was discovering his precocious genius on his own. While Rajam was Sivan’s first (and in his own words, best) student, he also learnt many songs from Madurai Mani Iyer, a top-ranking vocalist with a huge fan following, and such giants in the field as Kanchipuram Naina Pillai, Ambi Dikshitar, Mylapore Gowri Amma, Harikatha Ramachandra Iyer, Veena Sambasiva Iyer, Fiddle Sundaresa Iyer and Harikesanallur Muthiah Bhagavatar. His parents encouraged him to pursue his interest in drawing and painting as well. The boy made his own paint with colour powders until a neighbour, an army man, gifted him his first paint box.

Amazingly, the whole family was involved in cinema, with Sundaram Iyer, Rajam and Jayalakshmi, all acting in films based on Indian epics. If he was Rama in his first movie Sita Kalyanam (1933), with his sister playing Sita, he became Krishna in Rukmini Kalyanam and Radha Kalyanam, and also played a supporting role in the blockbuster Sivakavi (1943) which had the superstar MK Tyagaraja Bhagavatar in the lead.

At sixteen, Rajam was already a handsome young man with long hair and a rather regal bearing. “Master Rajam” cycled everywhere, to school (PS High School, where the best Mylapore brains were groomed), and the tent cinemas that dotted the neighbourhood to satiate his appetite for films, past the houses of musicians at practice, past the temple where the likes of Bharatanatyam icon Gowri Amma danced before the deity.

After completing school, Rajam joined the Madras School of Arts, where Devi Prasad Roy Chowdhury, the founder of the Lalit Kala Akademi and sculptor of the Gandhi and Triumph of Labour statues on the Marina, was the principal.

Travel taught the peripatetic Rajam much more than art school. His love of art was a magnificent obsession which took him on several journeys for all of eight years

Roy Chowdhury, who taught western art, totally discouraged any attempts at learning Indian art. It was an English poet, Lewis Thompson, whom Rajam met at the Ramanasram at Tiruvannamalai, that opened the young man’s eyes to the beauty of Indian art, especially the ancient bronzes of the country.

Travel taught the peripatetic Rajam much more than art school. His love of art was a magnificent obsession which took him on several journeys for all of eight years. He travelled to Ajanta-Ellora, Elephanta, Sittannavasal in Tamil Nadu, even the Sigiriya caves in Sri Lanka to observe and absorb. After his first visit to Ajanta, he did not touch his paintbrush for two months, so overcome was he by his astonishment at the magnificence of the work. He lay down and did not get up for days after he saw the splendour of the Sittannavasal cave paintings.

Younger brother Balachander was even more multifaceted. He was only six when he played the khanjira on stage, accompanying Rajam’s lead singing. He gave a full-fledged concert on the sitar before he turned 12, and joined All India Radio as a staff artiste by the time he was 15, playing the tabla, mridangam, harmonium, bulbul tarang, dilruba, and shehnai. He mastered the veena, which he started playing on the concert platform by age 20. He also successfully ventured into the world of cinema. Incredibly, Balachander taught himself every instrument he played. According to Rajam, he used to play the tabla with his right hand and the harmonium with his left while on the concert tours that came the brothers’ way after the success of Sita Kalyanam.

AS A PERFORMING MUSICIAN, Rajam was perhaps overshadowed by the abundance of vocal talent during his career, but never succumbed to the temptation to play to the gallery to boost his prospects. He gave much importance to the quality of voice production at a time when virtuosity tended to trump purity of vocalisation. For a south Indian musician, he had an unusual preference for the plain note rather than excessive gamaka or oscillation. His voice had a bell-like clarity with a shade of nasality noticeable in his mature years. Though he made the best use of his voice, and sruti suddham (purity of pitch) and swarasthana suddham (the perfect placement of each solfa note) were paramount to him, he did not make a fetish of his voice, favouring a relatively unobtrusive style of presentation.

It is perhaps these qualities coupled with his knowledge of the architectonics of music that made Rajam a sought-after resource at the academic sessions of the Madras Music Academy, where he was a member of the experts committee, and at innumerable lecture demonstrations, especially when it came to the elucidation of vivadi ragas (ragas whose appeal may lie in dissonant notes) or Kotiswara Iyer and his compositions in the 72 melakarta ragas (ragas containing all seven notes in both ascent and descent).

In his mellow years, Rajam was a minimalist by conviction, moving around Chennai on a moped, clad in a short-sleeved khadi shirt or kurta and simple veshti or the even less formal lungi, again far removed from orthodox Brahmin sartorial styles. He was no longer the charismatic dasher of his youth in appearance, but remained young at heart, ever curious to learn new things. His home, which was also his workplace, was totally unpretentious and filled with his work equipment, paper and paint of various dimensions. He was a hoarder of ‘one-side’ paper, bus tickets and other scraps of paper on the back of which he wrote notes of varying degrees of importance ranging from congratulatory messages to critiques of the recipient’s careless work. Amid all the clutter, he knew exactly where to find what. He was always willing to help his visitors, doing the artworks they wanted, explaining ideas or acceding to requests for interviews. At home, he usually wore a khadi vest and lungi. For most of his life, he enjoyed a quiet smoke and idli-dosa-coffee at his favourite Udupi restaurants. If he did not suffer fools, he kept it a carefully guarded secret from those who inflicted themselves on him. With probably more young friends than old, he was a loving, caring teacher even if a strict, demanding one. A measure of his popularity as a guru was the number of students who came to him to drink deep of his legacy, not necessarily seeking concert careers.

If Rajam was a religious person, he rarely showed it, his substantial work as a painter on religious or mystic themes notwithstanding. Did he believe in miracles wrought by music? Twice in his long career, once in south India, and once in the US, it rained cats and dogs after he sang Dikshitar’s Anandamritakarshini in the raga Amritavarshini, the legendary rainmaker. “I have sung it hundreds of times, but these were the only times it rained,” Rajam was quick to disclaim.

Rajam found great art haunting—be it painting or music, whether cave paintings or Veenai Dhanammal’s music. He once said of Dhanammal, “When she sang Akshayalinga vibho, she shed tears… Shouldn’t we have the same intensity of feeling while performing? How can you be a real singer if you are not a rasika yourself?” That in a nutshell was Rajam. He was a rasika, aesthete first.