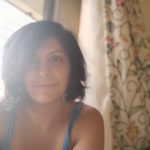 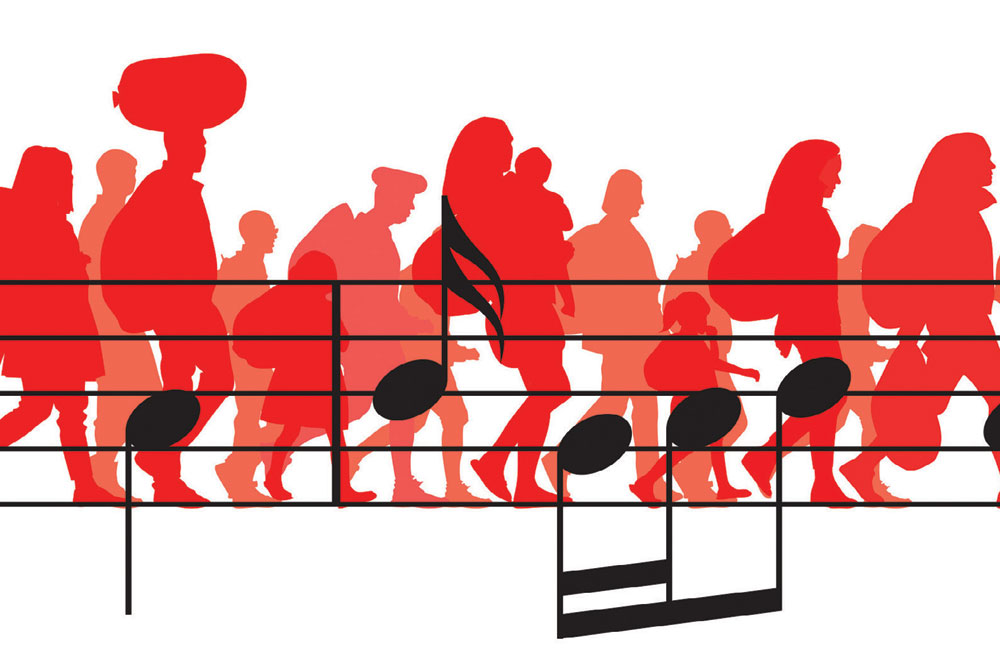 
RAMANUJ PATHAK HAS spent the last few weeks watching people leave the city. A resident of Mumbai’s distant suburb of Nalasopara, home to a large population of migrant workers, he sees people embark on uncertain journeys, bags on their backs, brows furrowed, a few crumpled notes in their pockets. It reminds him of a song that everyone in his Jaunpur district, Uttar Pradesh, knew. A song that his father would sing when he would come home on leave from his job as a mill worker in Mumbai. A song that reminds him of his own struggle for survival in this city.

In his raw, high-octave voice, Pathak, a singer of Bhojpuri folk and pop songs in Mumbai, belts out the couplet on the phone, pausing intermittently to explain the meaning.

‘I have no shoes on my feet nor roof on my head / How do I walk all the way, O beloved?’

Ever since the Covid-19 outbreak and eventual countrywide lockdown, haunting images of migrant workers making their way back to faraway villages have pierced through our insulated bubbles. While they have forced us to look at and acknowledge the social inequalities, their absence is making us realise that for decades we had invisibilised a work force that left its home and families behind to do the hard labour of building this country. A majority are from Bhojpur (parts of eastern UP, west Bihar and Jharkhand where the Bhojpuri language is spoken), a region with a long history of migration. And its people, over time, have responded to migration by codifying it in the form of a vibrant culture that explores the nuances of the issue.

The couplet, Pathak says, is from a song from the popular Bhojpuri folk play by Bhikhari Thakur, ‘Bidesia’. “In Bhojpuri, the word ‘bidesi’ or ‘bidesia’ is used for men who migrate in search of work and livelihood.” “The play is over a 100-years old but even today, anyone in that region can sing you the songs from this musical.” The play, he says, talks about the hardships a man faces when he leaves his home and family for a strange land but focusses on the suffering endured by the wife he leaves behind. “But this is the first time I am seeing this song being evoked in a circumstance when the man is leaving from the city to go back home.”

According to Jainendra Dost, a scholar and practitioner of the Bhojpuri folk forms, the migration motif is abundantly used in this culture. “Bhojpuri music has several genres and themes, like jastaari, ropani, jhumar are sung by the womenfolk whereas nirgun, purabi, gond are primarily sung by men. Nirgun is a spiritual genre and jastaari is an expression of the upper-caste women while they work at the grinding mill. Chaita is sung during the Chaitra months of March and April and in purabi, which uses virah ras (pangs of separation), men ‘become’ women to voice an expression of the sorrow of separation. The theme of migration, however, cuts across,” Dost explains, adding that over years, the folk performances that explore the theme of migration have come to be tagged under ‘Bidesia’, making it a broader genre, albeit unofficially.

The journey of Bhojpuri folk music is closely tied with the history of migration in the region. Documentary filmmaker Simit Bhagat, who made In Search of Bidesia, says that the abolition of slavery in the 19th century led to a shortage of labour in British colonies, which then fell back on the system of indentured labour. Uneducated and poor, many men, from the Bhojpur region, especially from the lower castes, signed contracts they did not understand, in hope for a better life. Misled to believe that their destinations were a mere few hours away by the sea, they were taken as far as Fiji and Mauritius and came to be known as ‘girmitiya’, a word rooted in the English word ‘agreement’.


“They too were people who left in search of ‘achhe din’, which never came. Back home, their wives would spend years waiting for a letter from their husbands, unsure if they will ever return. This lament of separation crept into the music, turning into an expression of their pain,” says Bhagat. He quotes a couplet from his film:

‘You left me deprived
And went away without a second thought,
How heartless can you be
Leaving my soul wanting and starved?
My dear, where in the world will you be found?’

The songs by men, however, would also lament the hardships of city life. For instance, in the couplet:

‘Having left my country
Having left you,
O my beloved
Life is just a big blow
Suffering is all what I know.’

In Search of Bidesia premiered last year at Dhaka Film Festival. During the making, Bhagat interviewed and spent time with artists across the Bhojpur region and has followed up the film with The Bidesia Project, as part of which he archives Bhojpuri folk songs. Bhagat closely works with Avanti Basargekar and Apoorva Kulkarni for the English translations of the Bhojpuri songs.

A MASSIVE GROUND IN Dahisar, crammed with people, waiting for him to belt out the latest Bhojpuri pop hit ‘Remote se kurta uthaiva’ is a memory that has sustained Pathak through the lockdown. “It was a Holi special for our people. At least 5,000 converged at the ground that Sunday night,” recounts the 40-year-old.

After a series of odd jobs that helped him sustain himself in Mumbai and his whole family back in Jaunpur, in 2009, Pathak gave it all up to focus on a career as a singer. It all started for him when a few “well-settled” members from his community heard him sing bhajans at the temple near his Nalasopara residence. Slowly, he found patronage among his people, expanded his repertoire to Bhojpuri pop and acquired the nickname ‘Chingari’.

Pathak’s career was furthered when he played the protagonist in Surabhi Sharma’s documentary Bidesia in Bambai (2013), alongside the Bhojpuri singing star Kalpana Patowary. Known for her explicit Bhojpuri numbers, she got into a controversy after she released the album The Legacy of Bhikhari Thakur in 2012. She was accused of appropriating Bhikhari Thakur to clean up her image.

Interestingly, expression of a woman’s sexuality has been a recurring motif in Bhojpuri folk music and overlaps with that of migration, argue scholars. Asha Singh, in her paper ‘Folksongs as an Epistemic Resource: Understanding Bhojpuri Women’s Articulations of Migration’, explains that disruption and redefinition of conjugality is a key consequence of migration. She views these laments as markers of protest, such as a song where the wife is complaining to her husband that other men, often referred to as ‘devar’ or brother-in-law, make sexual advances at her.

Sharma’s film places Bhojpuri music in the present context using Mumbai as the backdrop to explore how the Bidesia music travels from the Bhojpur region along with the migrant and what it means to them in a strange land. She explains, “They are a community that has for long held a precarious position in Mumbai. They have been serving the city but never found acceptability here. They have faced political and physical attacks. Raj Thackeray needed them to gain prominence among his own people. Even now, as they walk back home, they form a critical political mass but remain highly vulnerable and dispensable. How then, do these people anchor themselves in such a hostile environment? It is through the music.”

A majority of the migrants are from the Bhojpur region. A region with a long history of migration. Its people, over time, have responded to migration by codifying it in the form of a vibrant culture that explores the issue

Sharma filmed several live performances in Mumbai and in its suburbs over the span of two years, each of which had between 2,000-10,000 people in attendance. “Some of these performances had been taking place in my very neighbourhood. I was surprised that I had never seen them nor noticed the hoarding announcing their schedules. They were a people invisible to us, except as the faceless bhajiwala who blocks the road or autowala who refuses our fare. The only thing relevant to us was their labour,” Sharma points out, adding that not much seems to have changed today.

The film also examines how the folk tradition has crossed over to pop.Every song is about someone at home longing for you even if the song is highly sexualised, religious, poetic or political. Every song urges the man to return to where he belongs. The songs establish a strong idea of ‘home’, which is not their current city of residence. The music has adapted not only in terms of the beats and tunes; the lyrics also reflect the changing times and situations. Appeals from the wife to send letters have been replaced by requests for a phone that she can use to talk to him, unattended.

The coronavirus anxieties too, seem to have seeped into the music. In one song, the wife appeals to her husband to remain indoors “because what will become of me if something happens to you”. A protest song rooted in folk tradition from one of the people’s movements in Bihar that has been re-rendered for the yet-to-release film Bhor questions the very structure of our society in poignant words.

Ever since the lockdown, Pathak dreads mornings the most. “They always bear ill news, of people dying of hunger, being run over by trains, in accidents. They all seem like me,” he says. In 2013, when Pathak had saved some money from his performances, he purchased a house in Nalasopara where he lives with his wife. “I am thankful to god that I have a roof over my head. But I do not know for how long. Looks like corona is here to stay. The money I make during live shows depends on the number of people in attendance. But now there are so many questions… Will the government allow so many people together in one place? Will sponsors have the money to organise such shows? Will these migrants ever come back?”