Every year in winter, a village in Rajasthan becomes the nerve centre of electronic music. Akhil Sood on the making of a camping festival 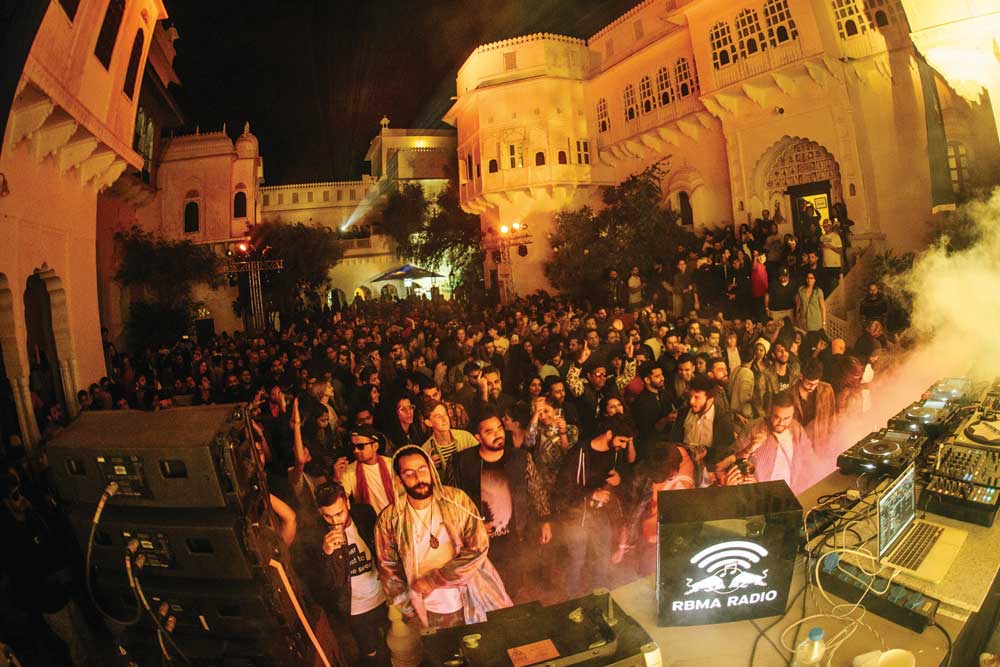 LUNA, THE OFFICIAL canine correspondent at Wild City’s headquarters in Delhi’s Shahpur Jat—the Hauz Khas that never was—charges toward me. I recoil. “Does she bite?” I ask my hosts, Sarah Elizabeth Chawla and Munbir Chawla, the brain-trust behind Wild City. “No, no,” Sarah assures me. “She’s just going to try to jump on you and lick your face.” The office appears a modern construction; it has one of those long community tables in the centre of a big room. The Chawlas—they’re married—are colour coordinated this afternoon as we sit down in the pantry; she’s dressed in a long black dress and he in a plain black T-shirt and jeans.

Wild City is a Delhi-based indie events and editorial organisation, centred around alternative electronic music. It is also one-fifth of the partnership behind Magnetic Fields, an electronic music festival held annually in December at Alsisar Mahal, a refurbished heritage hotel in Alsisar village located about 200 km from Jaipur in Jhunjhunu district of Rajasthan. The other four equal partners are WeThePpL, Agent, Thot, and Alsisar Mahal. This year, the headliner is British big-hitter Four Tet, a renowned electronic musician and DJ. The line-up also includes Ben UFO, the Ska Vengers and Sandunes, among other acts.

For the uninitiated, the festival happens in a far-off desert in Rajasthan. The nearest railway station is around 90 minutes away, and a chunk of the audience ends up driving down from Delhi. It’s a camping festival with a large area reserved for the setting up of tents. The majority of the music falls into a category picking up momentum in India: alternative, often-experimental electronic music, the kind you wouldn’t expect to hear at, say, a commercial EDM festival or a nightclub. It’s dance music, yes, but, as Sarah says, a lot of it is intelligent dance music (IDM). Wild City has built a name in the community for programming relevant and hip contemporary artists. Last year, it had a ‘dungeon’ which showcased jazz music and storytelling sessions featuring authors, artists and journalists. It’s become a space for the urban arts community to assemble each year—a collection of music, fashion, art, wellness, literature, and beyond.

The festival began life in 2013. “When we moved to India [in 2011] to do events, it was very much under the condition that we wouldn’t do a music festival,” says Sarah. “Coming from the UK, seeing how challenging an industry it is, and how easy it is to lose lots of money… And then we came here, and we were like, ‘Oh my god, we want to do a music festival!’” Munbir adds: “It was to showcase what we thought was interesting here, happening across the creative spectrum.” The partnership was formed, and the first edition saw a turnout of around 350-400 people.

A large part of this is because Magnetic Fields, given its location, is an experience-driven event. The music—and the other creative arts that have now found a home there—take precedence, no doubt. But the idea of exploring a heritage palace, watching off-beat events in unexpected nooks and crannies and hidden rooms, of being in the middle of the desert in the biting December cold of Rajasthan, all add to the charm.

Sarah and Munbir seem to function as an equal partnership, bouncing ideas off each other and adding two distinct viewpoints to a given subject. It’s even evident in their speech: while Sarah has a musical, stream-of-consciousness style of speaking, Munbir tends to break down his thoughts in a stubborn staccato. Her idealism, her focus on positivity and enrichment, is complemented by his slightly more pragmatic approach. It’s a mix of ‘what should be’ and ‘what is’.

The ‘coolness’, the hip quotient, seems to attract a crowd that’s probably there for the frivolities more than the music

I bring up the idea that Magnetic Fields may have earned a bit of a reputation as an elitist festival. A ticket for a six-person tent costs Rs 9,400 each. It’s Rs 8,500 apiece if you want to pitch your own tent. The more extravagant options include a room at the palace—Rs 32,250 each—and the Premier Bedouin Two Person Tent Package, which is Rs 21,000 per person. Plus the food and drinks and travel and (presumably) GST. Nearly 60 per cent of the festival’s patronage comes from the financially privileged electronic music centres of Delhi, Mumbai and Bengaluru, mostly from people in the well-educated, well-to-do 20- and 30-something bracket. Concepts such as wellness, the spoken word and experimental electronica could all conceivably be clubbed as an indulgence of those with means, I suggest.

Sarah disagrees, offering a different take on the subject. Storytelling, for instance, was chosen for its rich tradition as a narrative form in Indian history. With wellness too, it’s a similar situation. “The whole point is that India is kind of a mecca of wellness,” she says. It may not exactly be an appropriation of cultural ideas and traditions, then. Maybe it’s merely a way of presenting these to a gathering, tying in neatly with their insistence on retaining an Indian identity, from the famed Rajasthani hospitality to the creative influences that manifest themselves here. Fair to say it’s open to interpretation, though Sarah feels that accusations of pretentiousness and elitism often come from people who haven’t yet visited the festival.

THE ‘COOLNESS’, THE hip quotient, seems to attract a crowd that’s probably there for the frivolities more than the music. It could just as well be a three-day camping trip. Munbir feels there’s roughly an equal split between visitors treating the festival as a weekend getaway, and serious music fans. He adds, “We’re really proud of the fact that lots of women come here alone,” he says, pointing out a crucial facet of any music festival— the safety and security of women. “They’ve written to us after, telling us this is one of the only large-scale events in India where they’ve come alone and felt completely safe.”

I ask Rahul Giri, musician, DJ, and founder of Bengaluru- based collective about his experience of performing at Magnetic Fields. He played in 2014 as part of trip-hop duo Sulk Station, and in 2015 with Sulk Station as well as a solo set as _RHL. He returns as _RHL this year too. Giri points out it’s always a mix of people there; the attention given to the ‘hip quotient’ of the festival, he feels, is only partially valid. “It’s an unfair criticism. Yes, it’s not accessible to everyone; it can be quite expensive to get there. But you can’t pin it on Magnetic Fields; there’s diversity in the people attending. Even in America or the UK, most of the janata is there only for the ‘party’. I know for a fact that there are people who save up, who can’t afford to go there. Acts like Four Tet, Mumdance have a fan following, but you won’t see them live elsewhere. The festival is great at booking left-of-centre electronic acts, so people go. It’s the photos and the projection too; you won’t take photos of me in the corner in a checked shirt, being all cynical and critical. It’s only a percentage of the crowd there, but if you’re a Ferrari and we are all autos going brrrr-brrrr, [you] will stand out.”

Giri feels the actual performances can vary—the first year he felt a great sense of energy and support, even for the non-dance acts. The second year, many people were walking around in front of the stage. “I felt a little bit of that impatience. Like, ‘When is the dance music gonna start? ’” What remains consistent, for Giri, is the joyful experience of being there, just exploring the palace or hitting the tiny village streets at 5 am.

In addition, Magnetic Fields isn’t positioned as a ‘students’ festival’. “It’s definitely more for the working man; also the variety of content,” says Munbir. He claims the luxury rooms are the first to sell out. The tickets, in effect, are a function of economics. The Chawlas tell me how expensive and painstaking it is to create a mini-township in Alsisar from scratch each year; production needs to begin a month-and-a-half before the festival.

The world over—and more so in India’s conservative climate—electronic music is often associated with drug use. Magnetic Fields doesn’t really cater to the EDM or the psy-trance community, but the general nature of the music, in addition to its core demographic, does put the festival under the scanner somewhat. It’s something the organisers are aware of; they’re trying to steer clear of any narcotics-related notoriety. The location, setting and timing of the festival can perhaps attract audiences simply for its ‘debauchery’ potential, but they remain clear about their policy. Says Sarah: “We have a zero tolerance drugs policy. People get searched when they’re coming in to the site. If they’re caught with drugs, if they’re caught smoking joints or doing any drugs, they have their wrist bands cut and they’re chucked out.”

However, beyond a point of policy and safeguarding their own interests, as a festival they seem to also feel genuine empathy for their patrons. There are psychiatrists and psychologists on site, and their partnership with Tatva means there is a dedicated alcohol-free welfare section for those in need of an escape—another sign of their attempt to create a welcoming space that acts as a dynamic showcase of urban creativity.