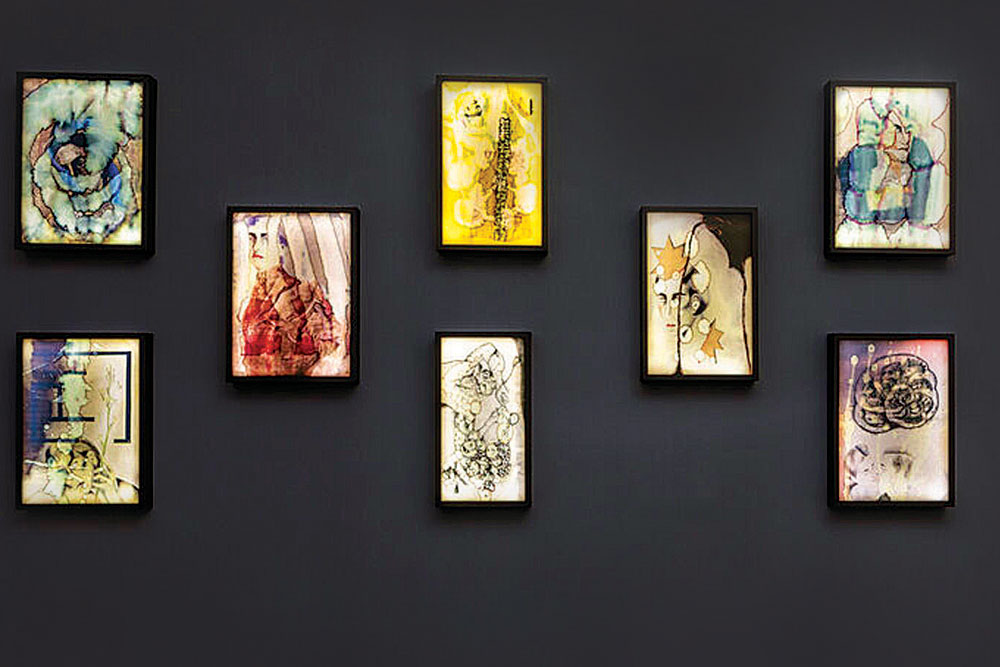 
HOW IS IDEOLOGY tied to the creative process of an artist? If the process is akin to self-editing, how are ideas blended and filtered, assimilated and erased?

These are questions worth mulling over when confronting Erasure, the new show at New Delhi’s Vadehra Art Gallery. Featuring 19 works curated to explore ‘erasure as an act of thinking’, the installation is Kolkata-born artist Susanta Mandal’s response to a wider debate about how history has been used as an ideological eraser to rewrite the past.

Consider Narendra Modi Stadium, formerly known as Motera. Or Binoy Badal Dinesh Bagh, which was once Dalhousie Square. Even if almost no Delhiite refers to Connaught Place as Rajiv Chowk, it still proves Mandal’s point of how our past is being erased and rewritten for political points. “Erasure is a vast theme and one could include many diverse aspects in it,” says Mandal. “It’s applicable in any timeframe and in any context. Somehow, at each and every moment, we all are part of its process. That is why I thought we could explore its complexities through an exhibition where artists could pour out their thoughts through their works.”

Erasure concretises the psychological aspects of the creative process by looking at it from multiple points of view rather than through a single prism. Mandal invited artists from across genres and from among those who had experimented in across mediums. A curatorial note was sent a year ago to the participants, prompting them to contextualise their influences and processes into new works in response. Besides Mandal’s, Erasure showcases work from eight other artists. Photographs, projections and paintings (acrylic, oil and watercolour) create a patchwork of memories that offer a multidisciplinary glimpse into their processes. “In their drawings, paintings or videos, these mediums do not hold their traditional identities, they cross the limits of the medium and become a new expression, a fresh work of art,” he says. Balancing the roles of curator and artist, Mandal says, was an entirely smooth process because he was surrounded by efficient peers and a supportive gallery.


The show doesn’t command a formal uniformity. Individuality still underpins the artists and their preferred mediums. Because only with multiple points of view can we arrive at the true essence of the idea of ‘erasure’. Arguing the case for process over product, Mandal says, “In a way, an act of thinking is itself a creative process. When we are all thinking together in and around a theme and its multiple probabilities, the end result is an exhibition.”

For Anju Dodiya, the exhibition offered her a chance to look at her past work in a new light. The Mumbai-based contemporary artist showcases eight of her archival prints, which find new meaning in this updated context. For Dodiya, the idea of erasure evoked the “disfigurement or defacement of history” as illustrated in the case of the Buddhas of Bamiyan. The 6th century relics in Afghanistan were destroyed by the Taliban in 2001. “While examining her own work in the current pandemic, she re-discovered the bleeding colours in some of her own earlier images,” says Mandal. “The unexpected poetry of stains and the unpredictable blurring or deletion of a face or body gave her a new perspective on the concept of erasures. A glowing light, a playfulness replaces the notion of disappearance or cancellation. In the dark times we live in, this process of re-invention and revival of her older paintings was Dodiya’s joyous interlude.”

Mithu Sen took on a similar line of aesthetic inquiry in (A)POLITICALLY BLACK. Confronting ‘erasure’ as an aesthetic as well as a political statement, Sen repurposes or, as she puts it, ‘defaces’ three of her old drawings to examine how the value of an artwork is reinforced or erased based on which way the political wind is blowing. Blackening her own work with graphite, pastel, twigs, scratches and decorative motifs becomes an act of self-censorship. It doubles as a performative gesture in protest against India’s increasingly ethnonationalist climate.

The writing is on the wall, literally, in Atul Dodiya’s oil painting titled Mystic/River. A surreality, perhaps even a shadow of the past, informs his sole piece in the exhibition. The expressionist grammar and the nocturnal palette attests to a haunting fragmentation of dreams and memories, coloured in greys, blacks and browns. It seems straightforward enough but the longer you pore over its details, there is a strange prophetic quality that emerges. The words scribbled on the wall (‘A voice comes from behind, Imagine’) happen to be an English translation of a poem by Gujarati poet Labhshankar Thakar.

ONE OF THE benefits of a virtual exhibition is it encourages viewers to engage with an artwork in a more intimate study. It allows them to zoom in on details that might have otherwise gone unnoticed and gives them a chance to discover something new on each visit. Look hard enough, and there are breadcrumbs which provide insight into its trajectory. Visible brushmarks help us trace the decisions and emotions that went into painting it. There is something intimate, perhaps invasive too, about seeing the process of an artist rendered vulnerable. Of course, even with installation views and 360-degree walkthrough tours, examining art on a screen can never substitute the real thing. It often renders art impersonal, the colours overcorrected, the scope and context unambiguous.

Erasure is a vast theme and one could include many diverse aspects in it. It’s applicable in any time frame and in any context,” says Susanta Mandal, artist and curator

Dayanita Singh displays two black-and-white photos titled Ash Grey 2 and Ash Grey 3, both mounted onto aluminium with a thin coating of ash-grey paint. This isn’t photography capturing a singular truth or preserving a moment in time for eternity. Exposing photography’s mutable relationship to truth and the past, Singh’s images explore how history and memory can be easily erased and reconstructed. Gulammohammed Sheikh encompasses larger sociocultural erasures into the exhibition’s scope as he engages with history and iconography in his mappa mundi-inspired works. Gandhi’s civil disobedience and Auguste Rodin’s The Thinker are two of the many recognisable images overlaying the map of the world in Unresolved Erasures. Sheikh captures the heart of India’s migrant crisis during the ongoing pandemic in his other painting, Undying Erasures.

Also offering commentary on the crisis is Ranbir Kaleka’s Ripped Base and the Insuperable Span, which animates the magic of touch in isolation. A man and a small girl, both of whom inhabit their own canvases, are divided by a street in the middle. When the girl attempts to walk across to embrace the man, he fades out before disappearing altogether. The man suffers the same fate as he attempts to meet her at the intersection. It not only captures our own anxiety compounded by isolation in the lockdown, but the anxiety of the many children separated from their parents on account of the migrant crisis.

Sudhir Patwardhan’s Distant City paints a familiar story of entire families packed up and on foot due to the pandemic-induced exodus of migrants. It makes their stories visible, highlighting the erasure of communities vying for visibility. Watching them leave behind the city, its skyscrapers, its smouldering sun and its heavy rain clouds, it is hard not to consider how the state has failed them. There’s still a modesty to Patwardhan’s approach, which doesn’t aestheticise the migrant’s plight as much as shed light on the erasure of their individual stories. As always, Patwardhan’s paintings have a slice-of-life quality to them. In Eviction, he imagines a man packing up to move houses. He turns a typical routine of doublechecking into something with far more critical implications, when set against the backdrop of the Citizenship (Amendment) Act and the National Register of Citizens. Perhaps, the man is looking for papers to prove his citizenship.

BESIDES HISTORY BEING used as a tool to selectively structure the past, Mandal says, there was another trigger he considered before conceptualising the exhibit. “It was the more clinical and pathological process of dementia, where the memory of the affected individual is tragically wiped out. For instance, the diary entries by British musician and composer Clive Wearing, whose short-term memory, owing to an illness, was reduced to under 27 seconds.” This is visible in Mandal’s own work, Even If I Forget…, with its emphasis on the mutability of memories. Mandal’s multimedia installation brings together a theatre stage and a projector to recreate scripts and notes from sequences of films he watched online over the last year. In the process, dualities emerge, neither purely natural nor mechanical, neither overtly cerebral nor emotional.

Some of the works boast a certain self-consciousness. Take Ayisha Abraham’s Enroute or of a Thousand Moons. It is an 8mm reel of a mid-20th century traveller in postcolonial India who filmed his experiences in unfamiliar cultural settings abroad. In the deterioration of the reel over time, the gelatin emulsion coating has allowed the growth of a layer of mould. This fungus adds a contingent layer of its own to the narrative, one which is outside of human social history. It’s art literally taking a life of its own, a living organism of components and systems working together to create meaning. Abraham says, “The fungus can be said to be an agent in the final erasure of memory and a marker of time that has passed.”

Trying to gauge the inner workings of these works is half the pleasure. When Abraham strips the creative process to its barebones, we get a palpable sense of how ideas form in the mind of the artist, and how that plays into the composition and the materiality. So, the process becomes art in itself, and vice-versa. The work is a sum of the medium, the message, the material and all the decisions that went into its creation. It’s partly why Abraham says her work can be described as “unfinished” by design or “in the process of being finished”.

Like many artists, she delights in open-endedness, and her work demands our creative and emotional investment. She believes it depends on how the viewer looks at it, and that this innate ambivalence becomes a part of the work too. Mandal echoes her sentiment, saying, “It’s entirely an artist’s call
where to stop, what to bring in, and in the end, how to put things together for the viewers so they do hold the individual’s unique ideas.”

Examining such art which illustrates all that goes into making it ultimately prompts another question worth considering: When is an artwork truly complete? Is it in its creation, exhibition or interpretation?