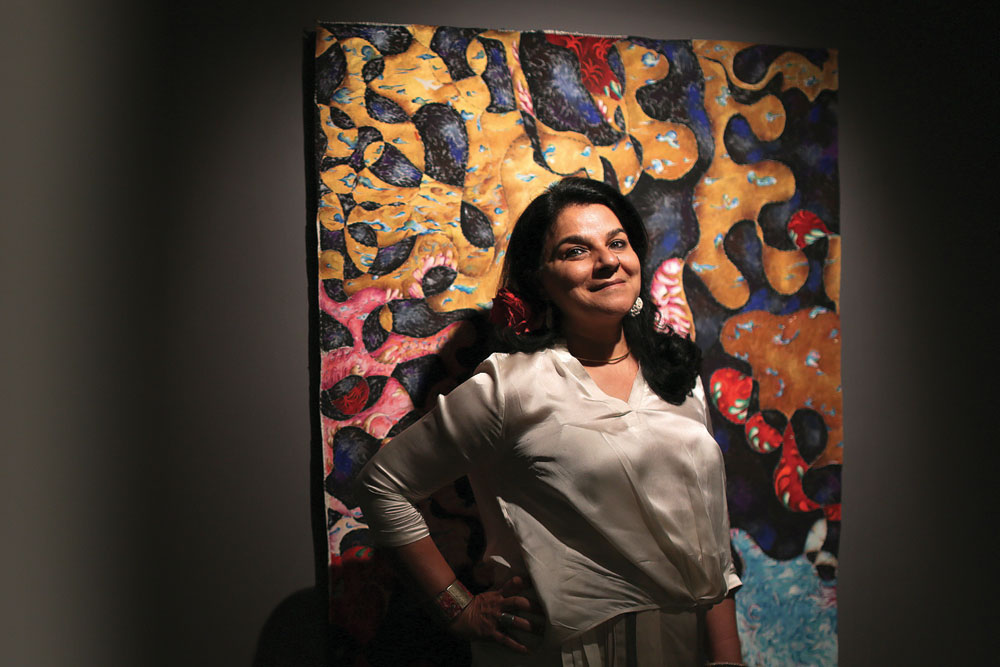 
IN CERTAIN TRADITIONS, women and goddesses are divided into three symbolic figures. If the maiden, the mother, and the crone each symbolise a separate stage in female life, then multidisciplinary artist Manisha Gera Baswani’s latest show in Delhi about the healing of family, society, and nature shows her movement from maiden to mother.

Baswani has, in the past, maintained multiple careers simultaneously as a collector, miniaturist, homemaker and a photographer. As a photographer–chronicler, she has been photographing Indian and Pakistani artists in their working environments and creative spaces since 1992 under an exhaustive project called Artist Through the Lens. Alongside this, she worked on a parallel project called Postcards from Home, which told the story of 47 artists from India and Pakistan who have a connection with the 1947 Partition, personally or through their families. The postcards also carried a brief text from the artist narrating a memory about their “lost home”, as well as a photograph of the artists taken by Baswani.

As collectors, she and her husband, Rahul, collect artworks from across India and Pakistan. But, alongside, collections of found objects, like feathers, leaves, and honeycombs, also fill their home. These interests feed into her work. As a miniaturist, Baswani creates fantastical landscapes that hark back to the art of Mughal and Persian miniatures and she also creates artworks from found natural objects.

Baswani’s new show, …and the dots connect now is as much about the stories behind her artworks as the processes and materials she’s used. The show deals with themes such as pain and repair, scars and reflowering. It uses incisions, threads, and colour to tell us about the processes of injury and healing. One of the themes of the show is Baswani’s husband’s major heart surgery a few years ago, followed by his difficult recovery with Baswani as the major caregiver. Soon after, she found herself in tremendous pain. She turned to acupuncture. “The need for physical and mental well-being took me to acupuncture. The acupuncture needles repeatedly punctured my skin, for days on end. The realisation that a painful pin incision, done repeatedly over a period of time, allowed for healing, made me start to look at pain differently. I found myself stimulated by this discovery,” she says. Baswani started experimenting with repeatedly incising and perforating large and small sheets of watercolour paper of varying sizes with pins in her studio. As the perforations transformed the paper surface, she started to find solace in the act of pinning the sheet of paper. This led to a series of interesting works including the first work in the show which is called Dil ki Baat, a huge paper canvas covered in medically correct hearts at different stages of repair; as well as works such as Where the Mind Is Without Fear, Tale of the Backbone and Stand Tall, all of which depict body organs and are made with pin incisions on paper.

What began as depictions of body parts via pins incision and gouache, took on a life of its own over time, and she started to use the medium of pin incision on paper to express a variety of themes, images, and aesthetic concerns.

AMONG THESE IS the work that is on the cover of the catalogue, along with the title. A small watercolour called Healing uses the actual acupuncture pins that were used on Baswani. “It was physical pain, followed by emotional pain and I feel now it’s a celebration of what that pain did and where I am today,” she says. “The whole idea of this show is that pain brings so much beauty if you process it, make it your own, and move on to the next steps. I wouldn’t be where I am if I hadn’t gone through this as a human being and as a caregiver of my husband.”

“The whole idea of this Show is that pain brings so much beauty if you process it, make it your own, and move on to the next steps,” says Manisha Gera Baswani, artist

These incisions on paper have created some of the most arresting artworks in an exhibition filled with striking creations. Baswani has used lightboxes to light works like Golden Grief and Pyaasi Bhoomi, which are works on nature and the way nature repaired itself during the first lockdown.
This was the time the huge Guldasta work was created. Baswani is well known in her building, and the gardeners often brought her large dried palm leaves from the garden. Working with the memory of seeing trees wrapped with sanctified thread (moli) whenever religious ceremonies are held—and the motif of healing nature—she started tying huge swathes of sacred thread to each leaf. It became an exercise for the entire household. The household help would come and help her once they were free. It took all three of them two years to create these three 7×10-feet-tall pieces that hang in the middle of the exhibition. “The palm branches and the colours on them are all handpicked and found objects. And when Covid first happened, all we could do was work in our condominium. The gardeners were removing the leaves from the trees because they were no longer green. They lay in my studio for a long time. And then I started relating them to what everyone was going through, especially nature. I felt that as human beings we had not treated nature well. And nature was giving back to us what we possibly deserve. And then I could see nature starting to heal. I saw clean air in Gurgaon: I could see trees. It was palpable. The moli wasn’t important at first. It was the colour of blood and how we have bled nature. And I’d seen people tying it on trees all my childhood. And then at the same time, these trees and plants are what we worship and that’s how human beings began to co-exist with nature. And the way you embrace a child and hold them near saying, ‘We will take care of you.’ That was literally that feeling when I would sit and do it.”

Art works using craft and embroidery beyond the incision-based pieces are also a part of the show. In A New Skin Baswani creates a work much in the spirit of the Japanese concept of kintsugi, which embraces imperfections or scars by highlighting them with gold. She places three shattered porcelain plates near each other—one has been glued back together; one has been left without one insert and the third has been repaired with crochet stitches. Sangat is made up of three seeds with crocheted leaves where the real ones have broken off. There are also two large chikankari pieces called Bejewelled Spring and Lifelines, which Baswani says came to her as an epiphany. She had been volunteering with master craftsmen in Lucknow. When she was pinning her incised works on her pinboard, she happened to notice that she was wearing a chikankari outfit, which was also made with incisions of embroidery on white cloth. So, she asked the craftsmen to help her and they enthusiastically agreed.

“I had to be cut open physically and be stitched back to become beautiful again. As a human being, my husband had to be inflicted with deep gashes, and I was doing that same so-called violent act on that virgin piece of paper or cloth. But eventually, the paper, like my husband, became stronger.”

BASWANI’S WORK DRAWS deeply from Indian history, whether it is Indian miniatures or stories from the Partition. She admits, “I come from a very deep love for my country, almost patriotic beyond limits and having A Ramachandran as my guru has constantly aligned me back to what India means to me, which includes miniatures and textiles.”

This love for the country and miniatures has manifested in works at this show as well. A beautiful section at the exhibition is based on incisions and watercolours on paper in the shape of lines of barbed wire. The series If Fences Gathered Moss, invokes Baswani’s previous work Postcards from Home. Her parents witnessed Partition and she grew up listening to their stories, recounted with both nostalgia and pain, of the home and deep friendships that they had to leave behind overnight. The pin incisions and delicate strokes of watercolour come together to delineate barbed wire fences. “Some of these appear encased in moss, gesturing both at the permanence of borders and of gardens on both sides of the fence. Several works appear to be in a red, mock-Chinese script, an indication of the aggression of the times,” writes Bharati Chaturvedi in an essay on the show.

An interesting element of the show is that Baswani has used some titles twice — once for the original watercolour works she had created earlier and again for the pin incised ones. The exuberant and fantastical watercolour and gouache miniatures that show the exuberant Baswani of old, are amongst my favourite parts of the show including Kyoto and Tapestry of Hope, Jatayu and the Garden of Roses and Bejewelled Spring, while Safar, brings together the old and the new elements of her work.

But the tour-de-force of the show is Basant, a 90 x 49 inch work made using pin incisions on paper. Baswani’s Instagram page has a video on how she created the difficult pin incised work and even the cultural critic, Ashok Vajpeyi writes, “White on white works are a singular achievement since only an accomplished artist alone can dare do that. For me, this is a major show, a path-breaking one for the artist. She manifests an astonishing vision, both rooted in meditative spirit and celebrative energy.”

…and the dots connect now is Baswani’s first solo exhibition of paintings and sculptures after a decade. A part of her ongoing photography project of the last two decades Artist through the Lens is currently showing at A Century of the Artist’s Studio 1920-2020 at Whitechapel Gallery, London. And her Partition project Postcards from Home will be shown at a major international museum later this year to commemorate 75 years of the Partition. Her pain has clearly created something new and worth celebrating.

(…and the dots connect now by Manisha Gera Baswani runs at Gallery Espace, Delhi till May 10)