A novelist traces his journey from the word to the image 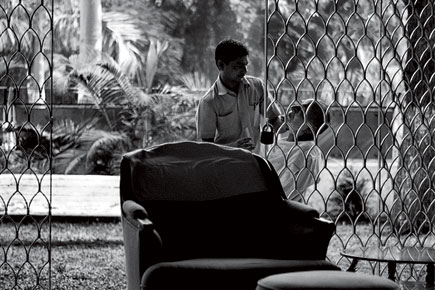 A novelist traces his journey from the word to the image


By the time I was 18, my mother could not walk; rheumatoid arthritis that got her in her thirties left her entirely bed-bound by her fifth decade. In bed, unable to turn one way or another, she wrote poetry, listened to old Hindi film music off a chipped blue iPod, and recollected her dreams with exactitude. Of her many vivid, prescient dreams, the most banal was the most recurrent: she was seated on a bench at a railway station, a shawl around her shoulders, her hands folded, as she watched passengers embark and disembark.

This dream meant nothing to me then, but she prized it tremendously.

I sometimes asked her if she was angry about how her life had panned out; losing her legs was a minor misfortune in the scale of things.

Her eyes would smile slightly, and she would say in Gujarati: “Je che te che.”

It is what it is.

She spoke then of vairagya—the German scholar Heinrich Zimmer describes vairagya as a stage in life defined by revulsion with the world, its emoluments, and is prefatory to reflection and renunciation. She was detached from her life, she said; aloof to its pleasure as well as its misgivings. Consequently, although she was in extreme pain, her cheer, hope and zest shocked all those who met her.

I suspect she was no longer laughing with life, but at it.

In spite of such philosophical consolations—to paraphrase Alain de Botton—I could not understand what my mother meant when she said she was detached from living. Part of my ignorance was owed to my trade: in my early twenties I had decided to write, and a world of novels insisted on a passionate inquiry into life, a celebration of its pleasures as well as a rage against its aesthetic and romantic failures. It seemed a reasonable task: to say you wanted to understand life, your role within it, and, therefore, engage with ideas, theories, truths and realities. What place did detachment have in all of this? Indeed, many admired writers affirmed that they wrote to understand political brutalities, question economic polarities, examine the role of women, or the idea of ethnicity. And promptly enough, the modern novel responded, expanding to accommodate a discourse on all things; no trouble was too little to rail against, no offence went undocumented, no identity unexplored.

And I fell into this same convenient whirlpool.

I resolved, through my novels, to try and comprehend sexual desire, and my own complex response to sex. (After all, so many Indian writers were so professionally interested in the state of the nation, at least one of us had to personally devote oneself entirely to the bedroom). I wanted, also, to study love, and understand why we frequently fail those whom we value most; anything, I suppose, could occupy the interminable lull at the core of writing.

But while I was writing my second novel, my father was diagnosed with brain cancer.

A year later, my mother died.

In Joan Didion’s memoir, The Year of Magical Thinking, she examines the 12 months after her husband, John Gregory Dunne, dies. Writing with surgical clarity, she traces the cause of his death: the loss of her husband forces her to reflect on her own mortality, and who she really is. While I am not prone to magical thinking, the 12 months that begun with my father’s prognosis and ended with my mother’s sudden death felt like black magic: an illusion, in effect. Within this chimera I recollected many of the things my mother had said to me—don’t fight, let it go; find someone and be happy with that someone; write down your dreams; make me a sandwich now! I wondered if it was possible not to gaze at the illusions that make a life—a happy marriage; a moral pursuit; a good job—but to gaze through them. (At what?) I experienced a gathering distance born of loss, and a disinclination to question things; I wondered if a heightened sense of this aversion could culminate in what my mother had spoken of: vairagya. After all, the skills I had gleaned from reading and writing novels had not equipped me for the losses that ruined me gently. It was not that I believed that novels had betrayed me; rather, it was as if they had told me everything I needed to know, and this knowledge had meant nothing at all at the crematorium. ‘To look life in the face, always, to look life in the face, and to know it for what it is,’ as Virginia Woolf wrote in one of her letters, ‘at last, to love it for what it is, and then to put it away.’

But I did not want to be the one to write these lines; I wanted, as my mother had counselled, to simply let it go.

And so I picked up the camera, and it grew into a season of magical seeing.

In my tenure as novelist, I had developed a few strong, strange relationships with writers, some ruined by obscurity and others, more fatally, by public success. At first, their neurosis was fascinating: it made me hunt out the root of the sadness that made them mercurial or insolent or eccentric. But on hindsight, it is naïve to have to admit that after glimpsing their damage I found myself muttering: and this is why you’re such a bitch on wheels? At literary festivals, there was all this talk of which authors and which books would last. Such sophomorish debates on literature lasting struck me as

silly, since the world is, debatably, 40 billion years old and would last twice as long, but their books seeing the next election was unlikely. If you’re not

out of print yet, sweetie, I wanted to say to them, you will be. But I didn’t. Because most of them were not really listening, they were merely waiting to speak; in such a constellation of egos, which includes my own, I preferred the dark night.

I did not know, and do not know, if photography is my dark knight. It is, for now, a way to spend time with landscapes and corners and people I love. Photography showed me that all beauty in the world is only a result of the light over it. Photography also relieved me of my adolescent ambition to try and understand life, to locate political and cultural beliefs within the parenthesis of imagined characters. And I no longer long to understand sexual desire—as much as I do to endure it, and, one day, be free of it. I am now also a firm believer that no one can fight anyone’s battle: so the notion of representational writing, speaking for anyone, a marginalised community, is not only arrogant but also a dandy con job.

Now when I revisit my mother’s recurrent dream, I find that what had seemed banal then—watching people embark and disembark—is suddenly very profound, and entirely relevant. She had found strength in accepting what you cannot change, and wisdom in living with pain as if it were a worthy companion, which it well may be. She had known that it is what it is, and from that surmised that to watch was enough. Oddly enough, photography helped me inhabit my mother’s experience in a way novels never could. The camera became my ally, a companion of vairagya. I learned to find in the photograph the lost moment, and see only its timelessness; to examine its truth, to see how it looks, to recognise its shape, its heft and contour; to see it all magically, knowing that what I had just seen, marvelled at and confirmed steadfastly, would not be so in the next moment. Finally, to look life in the face, to love it as it is, and then: to put it away.

Shanghvi’s images are a part of Something I’ve Been Meaning to Tell You, which will run at Vadehra Art Gallery, New Delhi, till 20 May