Lipstick Under My Burkha: Waiting to Erupt 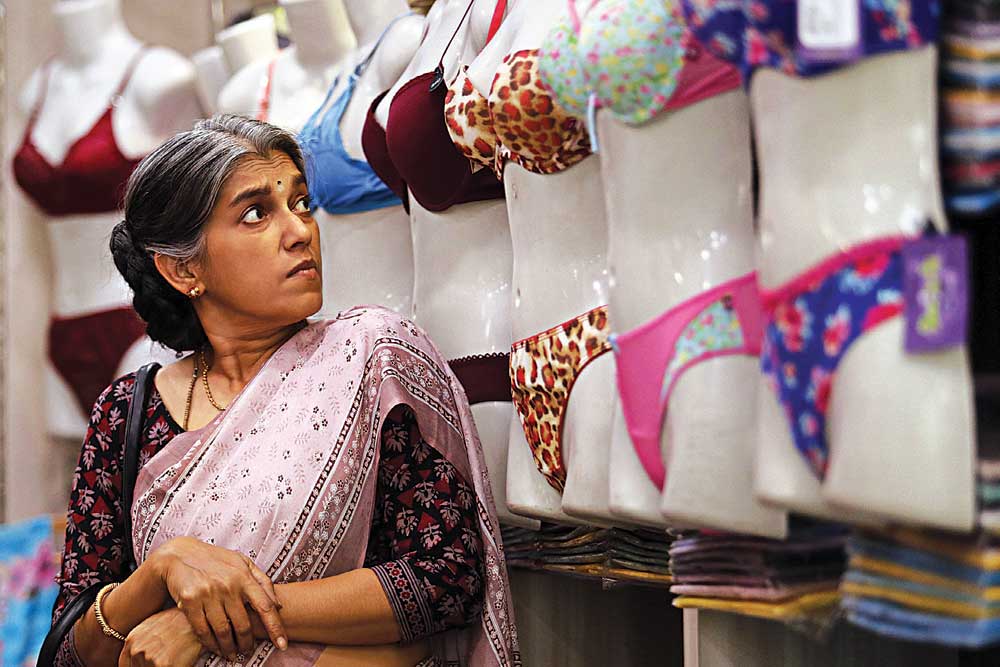 THANKS TO THE Central Board of Film Certification, we do not know when we’ll see Lipstick Under My Burkha. The lucky few caught it at film festivals, the rest of us make do with its trailer, and what a crafty trailer it is. It establishes its singularity from the start, as the voiceover is female. (Think hard, how many movie trailers are spoken in a woman’s voice? Chances are you will be hard-pressed to come up with any.) The voice says, “There comes a moment when every girl wants to be a woman,” a tepid translation of the far zestier, “Chaahat jag utthi hai”. We see a woman sneaking a lipstick under a burkha, a woman on stage, and another revealing more skin to take a selfie. The trailer builds towards a greying buaji (Ratna Pathak Shah) dressed in a blouse and underskirt scurrying into a bathroom, lit by a single bulb. She takes the phone to her ear. In the next cut she is getting her underarms waxed and hair dyed. The women in this two-minute trailer down shots, wield a gun, ride a scooter, smoke cigarettes, run in heels down darkened and damp alleys, dance with abandon, shoot sexy selfies and read smut. We see a couple making out in the car, in a muffled voice, the man says, “Should we wait till our wedding night?”—much to the consternation and disappointment of the woman who is riding him. A mother of young children (Konkana Sen Sharma), looks shyly into the camera and says, “Jazbaat mein beh jaate hai… uss time… condom… (Desire overrides everything else at that time…).”

In a matter of minutes, we are given four women who seize stolen kisses, who are ‘wet with desire’ and ‘waiting to erupt’. And that is why they have been deemed too dangerous by the good offices of Pahlaj Nihalani. Because these four women from Bhopal are all of us. These are real women. Women who walk the streets, work in offices, make breakfast at home, and not women who idle in celluloid.

The reasons offered by the Central Board of Film Certification for denying Lipstick Under My Burkha a certificate are so preposterous that they merit repetition: ‘The story is lady oriented, their fantasy above life. There are contanious sexual scenes, abusive words, audio pornography, and a bit sensitive touch about one particular section of society. Hence film refused under guidelines…’

This reveals what ails those in positions of power, and highlights their mindset—fear a woman’s story, disembowel her fantasy, eviscerate her agency. And this same movie, directed by Alankrita Shrivastava and produced by Prakash Jha received the Oxfam award for the best film on gender equality, had its world premiere at the Tokyo International Film Festival, and its India premiere at the MAMI Mumbai Film Festival in October.

What the CBFC really fears is gender equality. You can try to tell a woman how to behave, how to speak, but try as you might, you cannot control a woman’s mind, you can’t rein in the heft of her fantasies, the depth of her desires. What it allows is ‘male oriented’ and ‘male fantasy above life’.

Watch the trailer of Mastizaade (2016, which did fall afoul of the censors, but went on to be released ) to see this on display. The trailer tells us, ‘Rub it’, ‘Spank it’, ‘And Blow it’. The text of these phrases is helpfully highlighted by a spray of white, you know, just to make the message even more lucid. In a heist scene in Grand Masti (2013), a bank teller pushes the alarm button by getting an erection. Let us try to explain that better. Robbers come in. Everyone has their hands up in the air. The bank teller has an alarm button under his table. We see a white-skinned brunette with a heaving bosom. The camera scrounges up, down and into her cleavage and then hovers on her terror ridden face. When she realises that the Good Samaritan wishes to get an erection, she performs her part to the hilt, giving the male viewer more bosom heave, some more biting of the lip, one final tussle of the hair. And voila, the alarm rings.

The CBFC denying the film certification reveals what ails those in positions of power and highlights their mindset—fear a woman’s story, disembowel her fantasy, eviscerate her agency

The difference between the trailer of Lipstick Under My Burkha and the Mastizaades of the world is the difference between erotica and pornography. Pornography is a game of pretend and perform, one essentially choreographed by men for the satisfaction of men. Pornography comes with an end game at hand. The brunette’s job in Grand Masti is to arouse the man. His satisfaction not only brings him a happy ending, it brings harmony (the alarm rings, the looters flee and world peace is restored).

While a Mastizaade and Kya Kool Hain Hum get made time and again, a Lipstick Under My Burkha appears seldom. What the authorities are doing is creating a ‘single story’, by allowing only ‘male oriented’ (as opposed to ‘lady oriented’) depictions to come to the fore. As the Nigerian novelist Chimamanda Adichie said during a TED talk, “Show people as one thing, as only one thing, over and over again, and that is what they become… It is impossible to talk about the single story without talking about power. Power is the ability not just to tell the story of another person, but to make it the definitive story of that person.”

Authors and artists have often asked, ‘Why it is so hard to portray sex realistically and well?’ How can culture treat sex as a complicated and changing act between consenting adults, and not as a video game simulation between automatons? How can the most universal act be described without the trap of innuendo and the net of farce? Eimear McBride, the author of The Lesser Bohemians (which deals with sex), says that good sex writing places it in a human context.

Lipstick Under My Burkha, from what one can decipher, does exactly that. It is the biography of these four women in Bhopal, which also reveals their desires. The women have their own vocabulary of passion, want, need and fulfilment. They are not on screen to perform to the diktats of a male audience, they are there to discover the truth about themselves. Sex is not something men do to them, instead it is what they themselves seek out and seize. In its depictions of lust, it gives us humanity, the main defence we have against patriarchy. For generations, for too long, sex in cinema, sex in literature has been the domain of men. Perhaps that is why the vocabulary of it is still so limited and inadequate to the task.

We should celebrate that we are slowly seeing women develop their own vocabulary and grammar of sex in the cultural sphere. Internationally, TV shows like Girls first got honest about female sexuality, and others like Fleabag (about a London singleton navigating love, sex and death), The Girlfriend Experience (a law student in Chicago becomes a high-class prostitute) and Unicornland (a webseries about a woman in New York who explores polyamoury) have followed suit. In India, a multimedia project like Agents of Ishq allows for ‘positive conversations about, love, sex and desire’. Comedians and commentators like Mallika Dua, Stutee Ghosh, and Sumukhi Suresh have taken that conversation further. A recent AIB video, ‘A Woman’s Besties’ starred a ‘Clitika’, a ‘Vagayenti’, ‘Geeta’ and ‘Boobita’. It smartly unpacked a woman’s desire and confessed the fears of pregnancy.

These forums, whether they are online, on film, or in literature, are important because they deal with real women and the entire theatre of sex— the before, the during, the after—and not just that one moment of male release. As Shrivastava wrote recently in the Guardian, ‘There is very little space for realistic portrayals of ordinary women who laugh and cry, who are flawed and funny, who have desires and dreams of their own. Women who are struggling to gain agency over their own lives and bodies. In short, real women.’

The public domain heaves with misleading images of women. In order to highlight that there is not just a single story of sex (that is, male fulfilment), art (whether it is cinema or literature) needs to move forward imaginatively and fiercely. To break the stereotypes around desire, we need multiple stories around sex. We need lipstick under our burkhas.