Indian film censor certification today divides humanity into U, UA and A. There is a new proposal that hopes to bring common sense to the process. 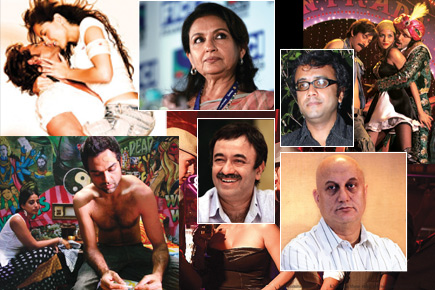 There is a new proposal that hopes to bring common sense to the Indian film censor certification process.


Kalki Koechlin was ten years old when she walked into the room and saw her parents watching the acclaimed but explicit film Camille Claudel, based on the life and relationships of the French female sculptor. “The film had a lot of sexual scenes. I was so embarrassed, I couldn’t go near it. It was boring for me at that age,” says Koechlin.

The actress, now famous for her role as the prostitute Chanda in 2009’s celebrated Dev.D, says the ideal age at which she would have watched her own movie would have been 15. “I don’t think I would have got its meaning before that.” Last year, Dev.D was given an A certification by the Censor Board, which meant that you had to be 18 or above to watch that film.

Dev.D might have had a larger audience under the newly proposed censorship laws. Until now, the Censor Board has functioned under recommendations of the outdated Cinematograph Act, 1952. This has resulted in nearly 60 years of furious debates, arbitrary cuts and even some ugly bans—Anurag Kashyap’s Paanch was deemed too violent, while documentary maker Anand Patwardhan fought a decade in court to get his Father, Son and Holy War to be screened on Doordarshan without cuts.

Now the proposed Cinematograph Act, 2010 will have categorised ratings, like those in the West. So apart from Adult (A) and Unrestricted (U), there are two new categories included: ‘suitable for the viewing of children who have completed 12 years (12+)’ and films that are suitable for those who are ‘15 years and above (15+)’. Says the Board’s current chairperson Sharmila Tagore, “We proposed new regulations because parts of the law had become obsolete.” This takes care of the amorphous, perplexing U/A stamp (children accompanied by adults) by the Censor Board that allows an 11-year-old to watch the harsh violence in Ghajini, but stops a 17-year-old from watching Kaminey because it has an A certificate.

“I’m morally opposed to censorship because it goes against the freedom of expression. Why do Hollywood film DVDs need to have an Indian censor certificate?” asks actor Imran Khan. The young star was irked last year by the Censor’s “strange patterns” when it gave an A certificate to the Salman Khan action extravaganza Wanted for its violent content. “The violence in Wanted was stylised and not realistic. The film promoted good values in sporadic scenes with messages like ‘Listen to your parents’ or ‘Don’t do drugs’. Yet teenagers couldn’t see that. However, a child was allowed to watch Golmaal Returns which had some of the filthiest humour. It had jokes directed at homosexuals and minorities, as well as sexual innuendo.” Khan, who has lived and worked in America, says the censor certification there is one of the best, though there are some strange guidelines. “In a PG-rated film, you can only use ‘fuck’ once. If you use it twice, the film gets an R rating. Also some nudity is okay for kids—they’re allowed to see the back of a woman in a thong.”

The Censor Board has often faced flak for being arbitrary, and on occasion, biased. “I feel the lesser the regulation of cinema, the better,” says 3 Idiots director Rajkumar Hirani. The film industry sees the Board as moral police. Last year, filmmaker Tanmay Agarwal protested when the Board recommended that he cut the two scenes of kissing he had in his short film Chal Chaliye to get a U/A rating, even though films like Dhoom: 2, Neil n Nikki, Bachna Ae Haseeno, Rang De Basanti, Jab We Met and Guru have got away with U/A or U certificates despite kissing scenes. Upcoming releases like Housefull (with sexual innuendo), or Kites with Hrithik Roshan and Barbara Mori kissing, are regarded leniently. Disgruntled indie filmmakers say this is because those producers have clout, or the movies are ‘entertaining’.

Board officials feel the system is flawed and that their own rules are difficult to implement. Censor Board Regional Officer Vinayak Azad has stated that there are no specific rules to kissing; different preview committees (made up of 100 Censor Board panel members) come up with different views. They need stronger guidelines. “It’s a good thing our laws are changing,” says former Censor Board chief Anupam Kher, “but the issue is not of a new law but (how) to implement it. Further classification like this helps, but it’s just a piece of paper if you don’t implement it.”

Hirani is sceptical about the 12+ and 15+ certifications. “How will they regulate it? Unless, of course, children walk in with their birth certificates. I think this serves as guidelines to parents—I find nothing wrong with that.”

Tagore bristles at the idea of filmmakers questioning the Board, pointing out that it is parents or theatre ushers who have to make sure rules are implemented. She says the role of the Board is akin to a consumer advisory or even perhaps a restaurant head waiter who recommends a certain dish. “Like ‘this is not good for diabetics’ or ‘use three times a day’. It’s like saying this Fisher-Price toy is suitable for kids 3 years and above. Our role is to make people aware. But we need to display our certification properly, even in newspapers—sometimes a man pays Rs 500 for a taxi to bring his whole family from Faridabad to a multiplex in Delhi, only to see that the film doesn’t allow children,” says Tagore.

Kher says these rules are necessary because films have an influence on the uneducated in India. According to him, it’s all very well for “pseudo-intellectuals” to pontificate on censorship, but it’s necessary to think about how youth in smaller towns will react to a scene in which a woman is being harassed. “Yes, I’m from the National School of Drama and an international actor who can say there’s no need for censorship—what nonsense! It’s absolutely necessary.”

Love, Sex Aur Dhokha (LSD) director Dibakar Banerjee believes films suffer because censor laws aren’t defined or implemented. His LSD had to swallow cuts like the word nangi in the song Tu nangi achchi lagti hai and a reference to a scheduled caste. “If censorship is only telling audiences what is suitable and the choice is yours, I welcome that. These new classifications for 12+ and 15+ kids then are rational. But the Censor Board can’t take on the form of an elected body controlling what the film is trying to say. If I depict a social truth and you cut that, it is a political clampdown. Cutting out ‘nangi’ was less objectionable to me than not mentioning a caste… people are killed over caste and you have special privileges for scheduled tribes and castes,” says Banerjee.

A possible loophole in the new Act is where the Censor Board can be ‘guided by the principles of natural justice’. The industry says this is dangerous. “The Board can’t be a barrier between the filmmaker and the people. That is subverting the core of democracy,” says Banerjee.

Under the Cinematography Act, 2010, at least one-third of the Censor Board panel should have women. Male producers and directors feel that this ‘reservation’ is unnecessary because subconsciously, they will end up looking out for women-sensitive issues. “Tomorrow, you will insist on a religious head or political leader among the members, and they will impose more restrictions,” says a producer on condition of anonymity, “Where does it end?” Tagore says lady members are necessary because they are “more conscientious, detailed, informed and progressive than men. I value both the male and female gaze. We need different sensibilities”.

It’s obvious that there are several gripes against the current Censor Board classifications. You also wonder if the Board will ever include the rating that Guide director and former chairman Vijay Anand resigned over in 2002. Anand took up the cause of the X rating, a valid cinema classification abroad, but the I&B Ministry had refused to even discuss it. The rating would have enabled the legal screening of pornographic films. But until that rating comes up for discussion again, at least the industry agrees that the new 12+ and 15+ classifications are steps forward.