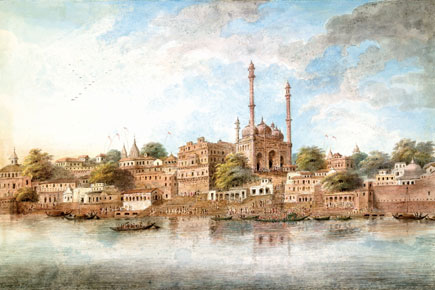 The scrolls of official history —echoed in schoolbooks and newspaper headlines— seldom concerns itself with the wholeness of stories it professes to tell, filling it up as it does with wars, dates, monarchs and murders. The greatest or most evil of rulers make an appearance, as do political achievements and disasters. An entire people’s stories exist within these subjective, caricatured polarities.

On the other side is a personal, micro-history which concerns itself with the minutae, the mundane; the crayon that colours in the black lines of official history. Personal history humanises even the political figure; it distances him from his treaties and battles, offering a window to his mind; it shows us the stunning views that surrounded him, the animals he saw, and if the author is English, his observations on the weather. Where recorded history shows disregard for these details, personal history returns the favour by existing as a parallel stream of reality, rarely punctuated with ‘The Big Picture’.

One of these political figures in Indian history textbooks is Lord Hastings—often memorised by schoolchildren as one of seven prominent governor generals to have served India before Independence. It is a less known fact that Lord Hastings’ travels across the country were accompanied and documented by one of the greatest Indian artists of the pre-modern era, Sita Ram.

One of the greats of what is known as the ‘Company’ style, Sita Ram accompanied Lord Hastings and his coterie on a 17-month voyage to the Punjab and back, and recorded his impressions in 229 large watercolour drawings. Of these works, 60 unpublished drawings along with corresponding journal entries by Lord Hastings have been put together into a book, Sita Ram: Picturesque Views of India Lord Hasting’s Journey from Calcutta to Punjab, 1814-15, by JP Losty (Roli Books India, Rs 2,495, 254 pages), the former curator-in-charge of the extensive Indian visual collections in the British Library in London. The drawings are also being exhibited all this month at Bikaner House. The result is a lively combination of lyrical paintings, written mutterings of the Governor General, all with footnotes by Losty, who has published many books on Indian art from the 12th to the 19th century, including The Art of the Book in India, Calcutta, City of Palaces, The Ramayana: Love and Valour in India’s Great Epic and Delhi: Red Fort to Raisina.

In order to inspect British possessions in India and to meet Indian rulers especially around the time of war with Nepal, Lord Hastings embarked on a journey from Barrackpore to Punjab and back, crossing Patna, Benaras, Allahabad, Kanpur (‘Cawnpore’) in a flotilla of 220 boats, and overland to Lucknow, Delhi and Punjab. Including his wife, children, secretaries, ‘sepoys’, there was an estimated entourage of 10,000 that travelled with him. The troupe disembarked at Kanpur, for the biggest meeting—with the Nawab vizier of Oudh who had honoured his father’s promise of lending the Company Rs 1 crore to help finance the war with Nepal. The principal members of the party travelled on elephant, camel, horseback, palanquin (there are Lord Hastings’ observations on garish palanquin décor) with two sets of tents— one that was present before the troupe arrived at the next encampment, and one that they left behind. Lord Hastings and his troupe rested at the camps during the heat of the day; this is when he met local people and carried on with day-to-day tasks of reading and replying to dispatches sent to him.

The general outline being a big picture one, what comes through in his journal entries are his observations on these several interactions, details of protocol—Lord Hastings did not, for instance, meet the then Mughal Emperor Akbar II although Lady Hastings went to Delhi as a sightseer; the continuous flow of ‘nuzzur’ (gifts) upon meeting notables. There are a couple of instances of surprise at the Indian deference of ‘white saabs’. For instance, when he meets Gundshaum Singh, one of the princes at the Patna court, and grants him permission to wear at the durbar a sabre bestowed upon him by predecessor Lord Wellesley, the latter leaves the room after their interaction in tears, ‘recounting the kindness’ with which he had been spoken to by the governor general. ‘Our people are much too negligent of those little winning attentions which operate strongly on the feelings of the natives. We think that the simplicity of our address and habits must be comprehended by them. But in fact they are too prone to ascribe those manners in us to our holding the natives too cheap to care what they may think of us,’ he writes, in a longer entry on 13 August 1814.

He also weighs in on seemingly odd ‘Hindoo’ beliefs and customs. Why, for instance, despite their ‘peculiar’ deference for rivers did Hindus regard the river Karmanasa (bordering Bihar) with such fear? Or even stranger, the staunch belief in destiny. So when a group of small businessmen cross the river with earthen pots on boats, they aren’t afraid of being attacked by gharials. The belief is if they are destined to be attacked by the reptile, it will come right up to their bedroom and do it.

There are also a surprisingly high number of observations on animals: for instance, noting the dexterity with which monkeys cross the road whilst carrying their young, or seeing a bear dance, Indian-style. The weather, quite fittingly, punctuates every sentence, which is partly the greatest driver, as also attributable to the English obsession with the weather to which Lord Hastings reveals he is no exception. In all of this, ‘big news’ makes only a footnote of an entrance, such as this classic entry from 1 August:

‘The wing being still against us, I rode out in the morning. The vicinage of Mongyr (Mungher) is thickly studded with villages. I went through some of them… The news that the allies had entered Paris reached us this morning. It came by way of Constantinople to Bombay. The rain came on again extraordinarily heavy, so that one may now trust the crops are secure. It continued raining all the evening.’

Continuing the micro-history project by way of his quiet, often dazzling visual narrative, is Sita Ram. His paintings borrow—and are a departure—from the standard ‘Company’ style that originated in Murshidabad. The Company style itself employed a rapid wash technique using watercolour, and the subject of paintings became more ambitious (than earlier themes like Ragmala or portraits) such as making great buildings of state capitals, or topographical views of the river Hooghly. Botanical illustrations were also common. Sita Ram’s repertoire includes all of these, but is a more improvised, impressionistic hand. His natural history drawings for instance take a ‘holistic and impressionistic view’ of the creature’s body rather than standard scientific natural history drawings, writes Losty in the introduction to the book.

Sita Ram’s landscapes and topography employ a mix of the Murshidabad style, British precision (especially when it came to perspective and scale) and a little bit of ‘Indian instinct’. For instance, there are occasions he will abandon precision simply for the sake of artistic grandeur, such as while painting the temples at Varanasi, which he shows as spiralling out to touch the sky—in real life, the temple is hardly much taller than the surrounding buildings. ‘Sita Ram’s views of buildings and their setting can again be altered for picturesque reasons but they can reveal details which are now missing, like the tiles or guldastas on mosques and tombs,’ says Losty over an email interview.

There are market scenes from Farrukhabad showing the palace gateway and shopkeepers plying their goods. Details of the green lattice work on the railings, the bullock carts, and red-sequined palanquins are exquisitely represented in the painting. The depiction of the ‘Jumna’ in Mathura’s Vishram Ghat is the classic tranquil river scene with shining waters, luminously white temples. Even the birds in the sky form a straight line, almost in deference of the quiet.

Sita Ram’s works are a ‘great source for social history, what it was like to travel by river or land in India in the early 19th century and how formal durbars were conducted—the numbers of boats, of elephants, of tents, etc, the preparations necessary for meetings. Looked at in conjunction with descriptions, such as those of Hastings in his journal, they present an unrivalled picture not just of British life in India but of how Indians of different classes reacted to it,’ explains Losty.

Several paintings depict places, monuments, even villages, that no longer exist, and it is therefore ironical that despite his casual approach to detail, Sita Ram’s paintings assume the status of the documentary. There are for instance depictions of villages bordering rivers which have now been washed away by changing tides and currents. There are also places that have been constructed over. Mathura’s Vishram Ghat, immortalised in a painting by Sita Ram, depicts an enormous Mughal cannon lying beside the ghat. A picturesque scene with blue skies mirroring the river water, part of the Agra Fort, a temple, and a small group of people carrying earthen pots to the river tell us this used to be an important place for ordinary people of the area. Losty’s footnote tells us that the ghat disappeared after a railway line was built across the river.

There are also depictions of legendary buildings such as the Taj Mahal, offering us a window to the monument and its surroundings in the 1800s. Capturing the Taj over the standard southern gateway view—which shows the pathway leading to the mausoleum overrun with mango trees—Sita Ram also shows us the southwest distant view, the Taj in morning light framed by trees, and the Taj with the Agra Fort in the distance, and the river ‘Jumna’.

‘Formal history books are great for dates and facts and political events, but we need social and cultural history books to inform us of how people lived and went about their lives. Art can help with this—not so much the pompous formal portraits of rulers, but paintings of ordinary people going about their business. This is the great strength of so-called Company painting in the early 19th century—it concentrates on ordinary people and how they lived their lives,’ says Losty.

The visual and textual gap-filling of history done by this book, like so many other ‘soft’ sources of history is best summed up by Lord Hastings’ journal itself, in the dedication to his children at the very start. ‘This journal is undertaken for the sake of the Dear Little Companions of My Expedition. It will be both gratifying and useful to them in a future day to have their recollections of circumstances revived, and to have many matters explained which they will be likely to have comprehended but imperfectly.’ Because without the colours on the canvas, the big picture is just bleak stark lines. It looks incomplete.

(‘Picturesque Views of India: Lord Hastings’s Journey from Calcutta to the Punjab’ is on view at Art Gallery, Bikaner House, Delhi, till 31 December 2015)