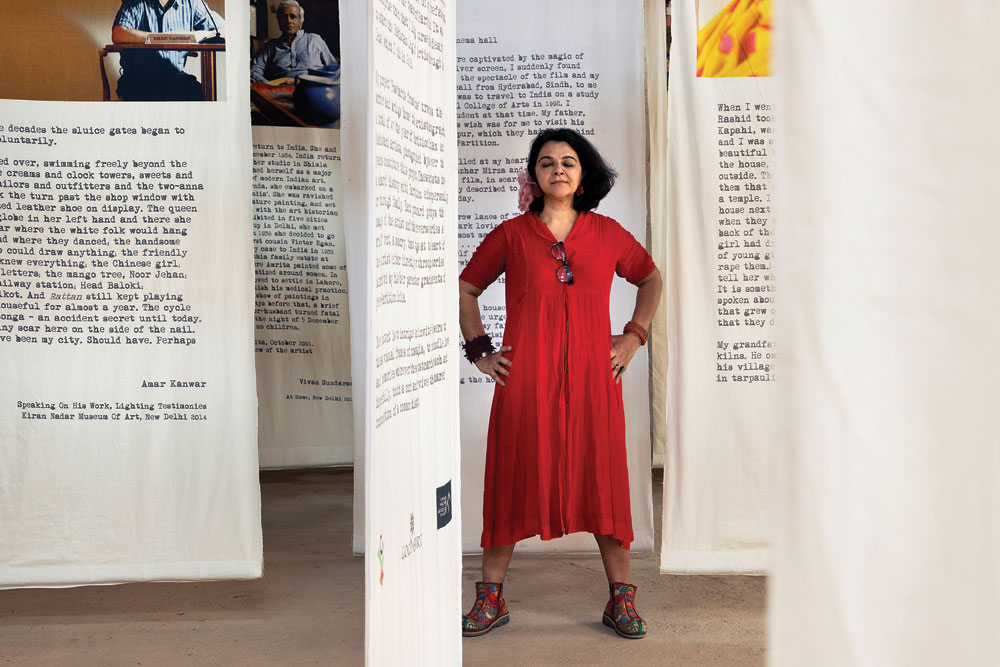 I GREW UP imagining my mother’s childhood in a faraway fantasyland called Fort Sandeman.

Somewhere in arid Baluchistan, a sprawling bungalow housed the Tibek family. My mother told me of a small zoo full of exotic animals, and of trees bearing badaam and zardalu.

My young mother, Amrit Varsha, a witness to five fragrant seasons of spring at Fort Sandeman, would walk hand in hand to school with her friend Kanees Fatima. The little girls would glance sideways with fascination at the rifle-toting guard at the home gate. My nana, Kanshi Ram Tibek was the DSP of that region which was inhabited mostly by Pathans. A larger-than-life personality, he towers through the fading sepia photographs in the fraying family album. With his fluent Pashto, and local garb, he mingled with the locals as another young, handsome Pathan.

Shouts of ‘Bhaag gaye bhaag gaye’ were a frequent wake-up call for the Tibek siblings. The rabbits had again staged an escape and were promptly replaced the next morning by a new pair.

Fort Sandeman? The name of a small town in Baluchistan? I would wonder if it was a figment of my mother’s imagination— for it certainly sounded like one. Thanks to Wikipedia, I found it hiding behind its new name, given in 1964. There it was ZHOB the fortress, once named after a British Official. My heart leapt, and every image stitched from the threads of my mother’s memory came alive.

Born to parents of pre-Partition India, my childhood memories were embellished with stories of their homes in Quetta and Sargodha respectively. On the terrain of my heart, Pakistan is an island, abode of my forefathers, floating away on the tears of Partition.

A practicing painter, I have been photographing fellow Indian artists in their studios now for 16 years. I had always nursed a desire to start the Pakistan leg of my project ‘Artist through the lens’. The opportunity came when I was invited to exhibit a solo of my paintings at Sanat Gallery in Karachi in 2015.

I still recall the day I landed at Karachi.

The gentle, warm sea breeze lightly brushed past me as I stepped on an instinctly familiar soil. The short flight had transported me from Delhi in less than two hours to the land that was once home to my parents. The pre-winter Delhi nip which announces the festive season was replaced by the enveloping warmth and hospitality of the City of Lights—Karachi.

I asked myself why it had taken me so long to come here. I was struck by how this place felt so, so familiar. This land had been kept alive through the memories of my parents that became our bedtime stories. Stories smuggled by them when they crossed the borders during Partition, leaving behind love and land. It was a home I had dreamed about through my childhood and now, finally, I stood on its soil to savour the sweet air.

Post my exhibition opening, days were spent at artists’ studios, conversing over innumerable cups of tea and coffee and viewing their art works. What I did not realise then was that an indelible mark on me and on my art practice was being formed through these encounters.

Most artists that I was meeting had an India connection through parents and grandparents. Some, like the charming Meher Afroz, had migrated to Pakistan as late as 1971 after studying art at Lucknow Art College. Others had fond memories, like the octogenarian Ahmed Khan who remembered eating puris and halwa made especially by the mother of his dear friend Naval Kishore in Shahjahanpur. Saba Iqbal spoke poignantly of how her grandfather, serving in the Pakistan army at that time, was sipping tea in his garden when he saw a gleaming car with an Indian flag drive unannounced into his driveway; and out emerged his dear friend Roop Chand from their college days at St Stephen’s College. He had recently come to Pakistan and was to start his tenure as the Indian ambassador there. They spent a beautiful afternoon together reminiscing their college days in pre-Partition India. Wasim Ahmed spoke nostalgically about his first visit to India and the Dargah Sharif in Ajmer, where his mother grew up. He spoke of instinctively following a map etched on his heart to the shrine, a route his mother would describe to him of her childhood when she would playfully hop, skip and jump her way there. And as he stood there praying for her soul, he felt her presence right beside him.

It felt as if there was so much to hear, talk about, share and never enough time. I realised that stories of love, loss and pain were shared on both sides of the border. It made me reach out to fellow Indian artists who like me, had been impacted by Partition.

DISCOVERED THAT many of my artist friends photographed by me had a pre-Partition connect. I sent out messages to those bearing Punjabi and Sindhi surnames, some photographed many moons ago, asking them if they or their kin had ‘crossed over’ during Partition. Most replied, opening their hearts. Some sent me anecdotes, others shared an intimate memory they had grown up with. These fragile, tender reminisces were to take the shape of my current photo-shoot project.

Postcards from Home traverses borders and brings ‘home’ the artist photographed. It features 47 artists, a figure chosen for the year of Partition, 25 from India and 22 from Pakistan, all photographed by me in their creative spaces over the last few years. All artists have a past with Partition personally or through family. They have shared the tugs their heart feels when they remember the ‘home’ they lost.

The project opened to an overwhelming response in the walled city of Lahore in March 2018 during the Lahore Biennale and later in November at the Faiz Festival in the same city. The young were curious about me and full of questions about the India they knew through television. Elders hugged me. Many cried reading the postcards as a flood of memories surged through. The senselessness of a line dividing a map and hearts stared sharply at me. My tears fell on a postcard I was holding, standing on the very land my parents once called ‘home’.

(The project is on view at the Kochi Biennale as a collateral exhibition till March 2019. It will be at India Art Fair 2019, Delhi , from January 31st to February 3rd)