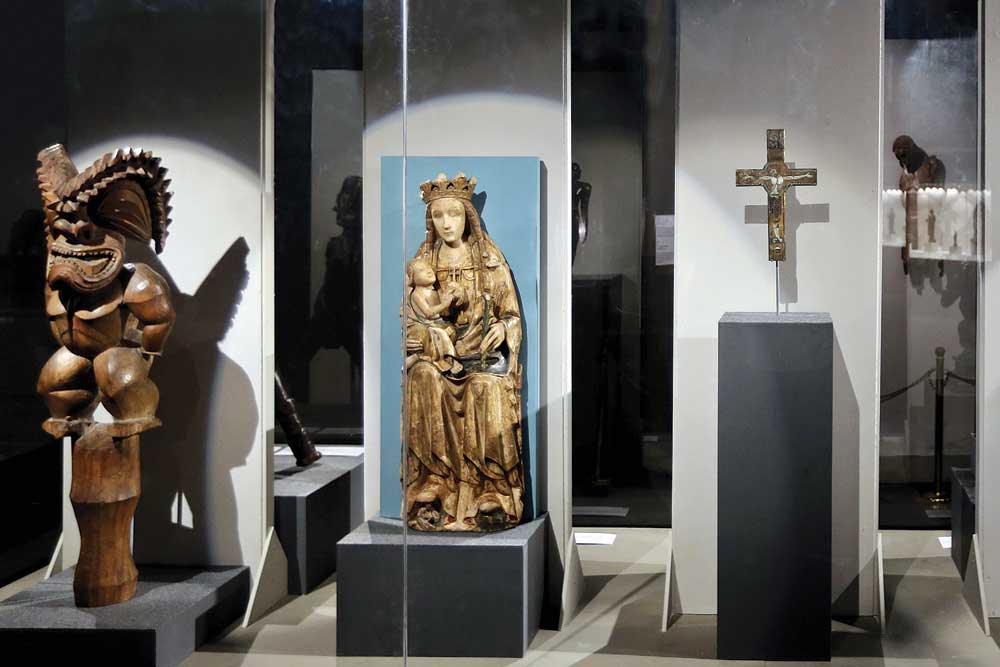 WHAT CAN A pepper pot tell you? It will tell you that the owner likes spices. But what more? At the National Museum, Delhi, a smaller than 10-cm silver-and- gold pepper pot of Greek hero Hercules grappling with the giant Antaeus is a totem of the entire world of trade. In the 4th century, pepper was no common spice. Pepper did not grow in Britain or any other part of the Roman Empire. To get to England, it was first shipped to Egypt from India and then transported by sea, river and over land.

A humble pepper pot can also be found in the iconic A History of the World in 100 Objects, a 100-part series by Neil MacGregor, made when he was director of the British Museum. It ferried viewers on a world history tour starting two million years ago to the present. In 15-minute presentations on BBC Radio 4, first aired in 2010, MacGregor would detail the significance of a particular object, and place it in the context of human history.

Inspired by MacGregor, we now have India and The World: A History in Nine Stories, to commemorate 70 years of Indian independence. A first-of-its-kind event in India, with about 200 objects, it is a collaboration between the British Museum, London; National Museum, Delhi; Chhatrapati Shivaji Maharaj Vastu Sanghahalaya (CSMVS), Mumbai; and about 20 other collections. Conceived over three years, India and the World has been jointly curated by teams in the UK and India, under Jeremy David Hill from the British Museum and Naman P Ahuja of Jawaharlal Nehru University, Delhi, as chief co-curators.

The exhibition, which was first mounted in Mumbai, was seen by over 200,000 visitors over three months. At the opening of the show in Delhi, Sabyasachi Mukherjee, director general, CSMVS, said, “This is the first time in the history of museums that more than 20 museums have participated in one exhibition. Never in the past has Indian art and history been showcased against global happenings. If you want to understand what was happening in India 1.7 million years ago, you need to know what was happening at the same time in other parts of the world.”

The exhibition is accompanied by a comprehensive website of the same name and a beautifully produced coffee table book. In the book India and the World; A History in Nine Stories (Penguin; 230 pages; Rs 1,999), MacGregor writes, ‘What happens when you bring objects from around the world together? Their meanings widen. The local looks outward, what is known is seen from a new angle. What feels familiar is suddenly part of a much broader, connected world.’

This is evident soon as you step into the show and enter the first section of the exhibition called Shared Beginnings. Leading a curated walkthrough of the show, JD Hill said, “When you pass through these doors you’ll see 1.7 million years of history.” The first exhibit is the hand-axe, which Hill defines as “arguably one of the most important pieces of technology ever created”. Our human ancestors who travelled from Africa to Asia created the first complex tools over a million years ago in Africa, and brought these tools with them. The creation of tools is important not just as an external manifestation of an internal desire, but also something that activated the same areas of the brain used for language, which might mean that the first stirrings of speech were also beginning to develop at this time.

“This is the first time in the history of museums that more than 20 museums have participated in one exhibition” – Sabyasachi Mukherjee director general, CSMVS

If the hand-axe is one of the earliest signs of human tool-making, the next is pottery. The pottery exhibits include pots made in different parts of the world, such as Iraq, Japan, Pakistan and England. The pots are as distinct as they are beautiful. JD Hill notes that while the “crudest pot” is from Britain, the most beautiful one is from Japan. Analysis of carbonised residues of the Jomon pot (2600-1300 BCE) from Japan shows that a wide variety of food was cooked in it, from salmon to deer and vegetables to nuts. The surface of the pot resembles the face of a cake with gentle fork pokes, because of the technique of pressing braided cords into the clay.

The next story in human history is the emergence of townships, captured in the section ‘First Cities’. The earliest civilisations as we know were Egyptian, Mesopotamian (today’s Iraq) and Harappan, all located in fertile river valleys. With cities came bureaucracy, transport and armies.

The most recognisable figure in this section is the ‘Dancing Girl’. This tiny figure (10.5 cm tall) discovered in the 1920s has been at the centre of numerous debates over the decades. Now we know that the ‘dancing’ part is unimportant; what is significant is that this figurine dates back to 2500 BCE and is a majestic reminder of our past.

Another spellbinding exhibit from this section is The Standard of Ur, dating back to 2600-2400 BCE Iraq. Discovered in the Sumerian city of Ur, it is made from blue lapis lazuli probably sourced from Afghanistan and white shells from the Gulf. This piece is fascinating because on one side it shows a city at peace, and on the other, a city at war. The war side is complete with the towering figure of a king, his enemies shackled and brought to him, prostrate corpses and even a chariot. On the peace side, we see the king enjoying a drink with his noblemen, listening to someone strum a lyre, and farmers and fishermen handing over their sheep and produce. The Standard of Ur was also part of MacGregor’s 100 objects. He explains its significance: ‘You couldn’t have a clearer demonstration of how the structures of power works in Ur: the land workers shoulder their burdens and deliver offerings, while the elite drink with the king—and to emphasise the king’s pre-eminence, the artist has made him much bigger than anybody else—in fact so big that his head breaks through the border of the picture. What we are looking at in The Standard of Ur is a totally new model of how a society is organised.’ What was then explains what we are now.

For JD Hill the most remarkable piece in the section ‘Empire’ is the limestone sculpture depicting the ‘festivities around the relic of the turban’, from Telangana, which dates back to 150 CE. It is special because while ‘empire’ is about retaining power and defeating enemies, this sculpture from a Buddhist temple shows renunciation.

The fifth story or ‘Picturing the Divine’ (200-1500 CE) displays early representations of God. While Hinduism believed that religious objects themselves were sacred, in Islam and Judaism figural depiction was avoided, even as interpreting the written word was considered a spiritual exercise.

Viewers of the section will quickly catch onto the sleight of hand of the curators. A Ganesha and a Jesus idol are exhibited side by side. One will assume that the Ganesha is from India, and the Jesus from the West, but reading the labels, one will realise that the stone Ganesha is from Indonesia and the wood Christ from Goa. This was a deliberate move to show how religions have moved from country to country.

A bronze Bahubali (800-99 CE) is another standout piece at the show. JD Hill says, “We wanted to put Indian bronzes in a different context, in a context you’ve not seen before. We’ve put bronzes in the context of how did other religious faiths portray God at the same time.” This is a piece that is robust with both machoness and austerity. In this section if we have the serene bronze Chola Buddha on one side, we also have a fearsome wooden god of war from Hawaii on the other. This 18th-century figure’s face is all flaming nostrils and rictus grin. A show like this which lines up a Jamaican Taino god alongside a Mexican Huastec goddess and a bronze Narasimha brings the global home and allows for a dialogue among all.

The penultimate section ‘Quest for Freedom’ includes contemporary artworks. A painting which wonderfully expresses our globalised world is Amrita Sher-Gil’s Two Girls. This 1939 oil-on-canvas depicts two young naked women, one a light-skinned European standing with her arm on the shoulder of the other, a darker-skinned Indian who is seated. The painting is a lovely depiction of ‘freedom, equality and identity in a globalised world’ and speaks of the coming together of different cultures in one frame.

(India and the World will run till June 30th at the National Museum, Delhi)