There is no mistaking Russian muscle in this tourist heaven, but the presiding bad guys are decidedly Goan 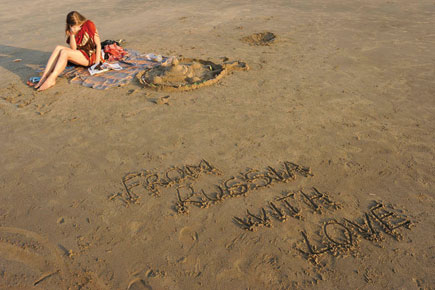 There is no mistaking Russian muscle in this tourist heaven, but the presiding bad guys are decidedly Goan


Charter Jack and Charter Jane are yesterday’s news in Goa. Russians, who have this year surpassed the British as the largest group of overseas visitors by nationality to this self-professed paradise, are today’s pashas. In large swathes of this tiny traveller universe that runs a three-hour drive north to south, and a couple of hours from the western coast to the lush green of the Ghats to the east, the latitude and lingua are increasingly more Moscovite than Manchesteresque. And so much, that the aggressive accents and mehendi odours of Delhi, the geographical and ethnic markers of domestic tourists, often pale in comparison.

When Goa began to play traveller roulette in the 1960s, welcoming flower children from Germany and the Americas into sleepy fishing villages to work a counter-culture with the help of hallucinogenic produce from Shiva’s kitchen garden, it could hardly have foreseen this.

Or maybe it did. By the time I started to visit Goa in the 1980s, hippies had begun to be nudged by charter tourists from Germany and the UK. By the 1990s, Finnish-Goan romances had begun to add to similar hyphenations from Britain and Germany. Young Israeli castaways had arrived, de-stressing after army service in such large numbers and such drug-fuelled release, that representatives of ultra-orthodox Jewish sects soon followed, offering beacons of structured sanity.

Russians are merely the latest in this changing stream of overseas traveller flotsam; they now number nearly half a million a year. And more than three times that number come from India—partygoers, holidaymakers, honeymooners and visitors to Goa’s bustling temples and cathedrals. But these Russians bring with them an ominous tag that forms the background of much recent commentary about Goa: the Russian mafia. The surge even drove me, a resident here since 2004, to name as the new overlord of drugs and prostitution a fictional, brutal Russian called Sergei Yurlov in Once upon a Time in Aparanta, my satirical 2008 novel set in Goa. Call it premonition-in-progress.

There is a pattern to leisure rackets. For instance, the Yakuza set sail to Hawaii. The Japanese underworld followed this major destination of Japanese leisure travellers with investments in hotels and condominiums. Yakuza-controlled travel houses, sex and entertainment drugs became a corollary. Altogether, it was also a convenient way to launder off-system cash and build legit business fronts. Decades later, Russian and Chechen mafias made inroads into the former Warsaw Pact nations, Western Europe, and parts of the Gulf to traffic in sex and drugs, and to launder cash. Triads, the ethnic Chinese templates, have their own persuasions. A similar template has now arrived in Goa with the Russians, who have plugged into and expanded the already robust drugs—natural and chemical—and sex circuits in Goa that cater to partygoers from several nations, and several states of India. A two-day rave yields enough profits to rival a modest hotel’s from the tourist season that runs from October to March. Narco-terrorism investigators place Goa as a major trans-shipment point for synthetic drugs.

From available indications, the Russian incursion in Goa is robust, but limited to the Russian-controlled beach areas. Here, some of the biggest land deals have proven Russian interests. The signs in stores and restaurants are in Russian. Guest houses discourage non-Russian tourists. In several areas, they no longer have to, as tourists from other nations have begun to keep away, driven away as much by the Russian influx as Goa’s rapid slide towards becoming among the tawdriest, filthiest ‘party destinations’ in Asia. In early December, a visiting German delegation said as much, explaining the decline of visitors from that country, once second in number only to Britons.

Britain’s Commonwealth Office has put out an advisory to beware Goa not only on account of its being a potential target for ‘jihadis’, but also for robbery and rape that follows the now established Goan leisure-tradition of the spiked drink at parties, besides alcohol and drug abuse. Forty Britons died in Goa last year. A year earlier came the drug-and-rape death of a 15-year-old child called Scarlett Keeling. The accused—and protectors of the accused—are Goan.

The Russians, like the Israelis and others before them (and along with them), are welcomed and profitably tolerated by Goa’s steadily powerful and fattened tribes of ministers, MLAs, police officials and panchayat leaders. They are openly invested in protection, and in the business of hostelry and food and parties. Equally, they are invested in the construction boom—riding on leisure traffic—that has seen a three-fold increase in real estate prices in the past three years, wilfully ignoring zoning laws and even beating up and attacking with choppers citizens who oppose such expansion. Victims have included lawyers and senior citizens. A restaurateur had his head nearly severed. Several of this tribe of gato gordo (fat cats) are invested in the third of the Goan triumvirate, iron ore mining, a practice which is rapidly denuding the eastern part of Goa even as it enriches the west. A Mercedes showroom has opened a few minutes drive south of the village I live in.

The reigning mafiosi in Goa are decidedly, robustly Goan. This is a true story.