The Spanish government proposes to make Jodhpur the flamenco capital of India. Take a wild guess why. Or just read on. 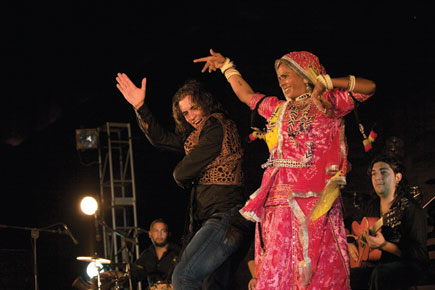 The Spanish government proposes to make Jodhpur the flamenco capital of India. Take a wild guess why. Or read on.


It was the night of Sharad Poornima, the brightest full moon in all of north India. But when a young man proudly tossed his mane of hair and took to the stage, a shadow fell across the moon. That intoxicating night, as the Mehrangarh Fort in Jodhpur lay bathed in moonlight, someone shone brighter than the moon. It was flamenco dancer Farruco’s night and everybody knew it. Even the moon.

Farruco has been dancing since he was four. He’s 21 now, has toured the world, and has performed at most prestigious venues across the globe. Yet, the Mehrangarh performance was special. As Farruco danced to the guitar of celebrated guitarist Antonio Rey, the air was electric. Because that night was a homecoming after all.

Flamenco is believed to have originated in India, announced Spain’s ambassador Ion de la Riva to tumultuous applause. And the Spanish government is planning to explore this by making Jodhpur the flamenco centre of India, The initiative will be in collaboration with the annual Rajasthan International Folk Festival (Riff) in Jodhpur, organised by the Jaipur Virasat Foundation.

“Jodhpur will be the flamenco capital of India. We are planning to set up a school in Jodhpur and put together collaborative productions, hopefully by next year itself if things work out,” says de la Riva. “There will be an institutional agreement between the Institute of Gypsy Culture in Spain and Riff.”

But why Jodhpur? “Because there can be no better venue than Mehrangarh Fort. We have been speaking to Maharaja Gaj Singhji, and he is very enthusiastic too. The entire initiative depends on Riff really,” says de la Riva. “Ideally, we’d like to have the classes at Mehrangarh Fort, but let’s see what they can organise. In fact, Farruco has already told me that he would like to come back and work with artistes here for a month every year. All the other artists also want to come back. So we could organise workshops with them and Rajasthani and other Indian artists. I personally would love to have sarangi player Ustad Kamal Sabri but it’s up to Riff to pick Indian artists.”

There are other plans as well. Fernando Casas Granadino, artistic producer of the flamenco troupe that performed in Jodhpur, Delhi, Bangalore and Mumbai, is already talking of a gypsy festival. “We would like to eventually develop a festival of gypsy culture where flamenco would be a key element and a meeting ground for possible collaborations between Spanish and other European gypsy art expressions with Indian culture. We’d like to organise in a festival that will include dance, music, but also art exhibits, film festivals, lectures, workshops and master classes and collaborations among different cultures.”

Divya Bhatia, director, Riff, says about the flamenco project: “Well, we hope to have gypsy homecoming as a theme for the festival next year… we are very happy with this proposal.”

Flamenco and India. Sounds seductive. And it’s easy to believe the kinship if you saw the finale at Riff—a short duet between Farruco and kaalbelia dancer Rajki Devi, which was apparently put together in 15 minutes flat.

The entire troupe, consisting of Farruco, Antonio Rey, his sister Mara (vocals, hand claps and dance), violinist Bernardo Parrilla and percussionist Isidro Suarez arrived from Copenhagen, in Jodhpur, without their baggage—even their instruments. So Suarez had to play the traditional Rajasthani folk instrument mante, something he had never played before.

The easy camaraderie in their collaboration would suggest some underlying unity in the art forms. But is there a more substantial historical basis to this connection? Professor SP Ganguly, who teaches Spanish and Latin American Studies at Jawaharlal Nehru University, seems to think so. “Chaman Lal who wrote the book, Origin of the Gypsies, talks about how gypsies originated in India and journeyed to Europe and gradually spread all over the continent. He doesn’t talk about flamenco in particular, though, but there are other references,” points out Ganguly. “Like the great flamenco dancer Viciente Escuredo , possibly the greatest ever, who came to India around 1910-11. He wrote a book called Mi Baile (My Dance) which was published in 1946, in which he speaks of the resemblances between flamenco and the dance forms of the gypsies here and Bharatanatyam.”

But Bharatanatyam dancer Merce Escrich, who is from Spain, disagrees with this. “With all my respects to the flamenco maestro, I’m very doubtful that Escudero could see a resemblance between Bharatanatyam and flamenco, especially when flamenco dance was for him ‘to dance how you feel at that particular moment with little or no respect for polished academic rules’. This approach is far away from 20th century Bharatanatyam,” she maintains.

De la Riva, meanwhile, points to the oft-mentioned resemblance between flamenco and kathak. “Footwork in kathak is considered very similar to flamenco dancing. Granandino speaks of the similarity in the rhythms of Indian music and Spanish gypsy music, pointing especially to the hand clap styles and foot work. Here too, there emerges a real historical connection. In Rajasthan, Escudero noted a community called Kartals whose clapping of the hand is very similar to the Castanuelas of Spain. In Sanskrit, kar means hand and tal is rhythm. [There is also a Rajasthani percussion instrument called kartal made of wooden blocks with holes for fingers and copper plates.]

Then, of course, there is the matter of language. “The language of the gypsies in Spain is Romani,” says de la Riva, “and Romani originates from Sanskrit.” It’s a fact Ganguly concurs with. “Noted indologist Roger Riviere says 30 per cent of the words used in gypsy language are of Indian origin, very close to Sanskrit, particularly the language spoken in north-west India. And the gypsies in Spain have a goddess similar to Kali, she is called Santasara. They have annual festivities that last for a few days, after which the image is immersed in a river.”

Yet, interestingly, flamenco culture is unique to Spain. But if we went by Chaman Lal’s theory that gypsies journeyed from India to Europe and fanned out all over, shouldn’t flamenco—or some form of it—be a part of gypsy cultures all over Europe? And hence, trace their musical and artistic roots to India? “To an extent, yes,” says de la Riva, “But I believe it’s the gypsies in Spain who have remained closest to their traditional culture. So we have this unique connection with India, we could become the bridge between India and Europe. We want to take this forward with such projects. In fact, I am working on making Kolkata a centre for Spanish classical music in India. The formal announcement will be next year when we can say something more specific, but I have had talks with Bengal Chief Minister Buddhadeb Bhattacharjee and he was very interested.”

Well, well. Flamenco in Jodhpur, Spanish classical in Kolkata. Maybe Bollywood wasn’t that far off the mark back in 1993 when Shah Rukh Khan rode out in a cape with ‘Baazigar’ emblazoned proudly at the back and dismounted to unleash a couple of flamenco moves. Perhaps, they got it before we did.