Works by five Leftist artists show the interplay of ideas, politics and camaraderie in vivid colours 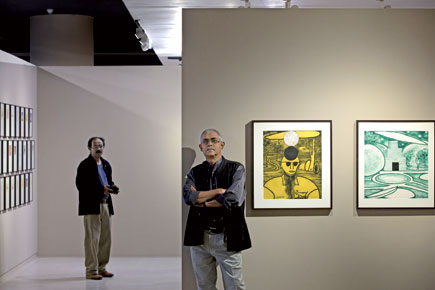 Noida, that exploding suburb of India’s national capital, is very different from the New Okhla Industrial Development Authority it started out as in the 1980s. The homogenising horror of glass-and-chrome has almost completely taken over the landscape, and its younger cousin Greater Noida with its Formula 1 race track and mushrooming MBA institutes isn’t too far behind. Much before Gurgaon became the NCR’s big thing with its ‘Eiffel’ and ‘Ridgewood’, Noida had ‘Elevate’—a 24-hour nightclub that had everybody talking. Noida is a place where one can build a Lutyens-style bungalow simply by having the money for it.

One of the buildings in this slice of suburbia is HCL Industries, which houses the Kiran Nadar Museum of Art (KNMA), whose other wing in Delhi’s Saket, quite fittingly, is situated within a prominent South Delhi mall. Amid this backdrop, to see an exhibition of artworks drawn from Marxist thought is an exercise in unravelling multiple layers of irony. And that might well be the larger point.

‘Pond Near the Field: Five Artists from Kerala’ is an exhibition of works by five artists at the forefront of a radical group of leftist artists in Kerala. It brings together 200 works in all—drawings, prints, collages and diaries by KP Krishnakumar, NN Rimzon, Surendran Nair, KM Madhusudhanan and CK Rajan, all of whom were part of the first few batches of the College of Fine Arts, Trivandrum, formed in 1975.

‘Pond Near the Field’, a phrase borrowed from one of Rimzon’s works, isn’t just an evocative image of a lush Kerala landscape, it’s a place of conversation and friendship, of learning and laughing—often at the absurdity of things. “When we started out, there were no teachers, really—just an institute head, a library and each other. We had to depend on each other’s ability to reflect. Knowledge production was a community production. We constantly learned, reading up all those magazines on British and American contemporary art, drawing, and bouncing ideas off one another. We would always ask ourselves, ‘What is this art about? What is it doing?’ ” says Nair.

Politically, the mid-70s was a very charged period in India. The state of Kerala itself saw much political unrest, with the extremist Marxist-Leninist- Maoist faction becoming a crucial political force, under a Central government which had declared Emergency. This led many young minds of a generation inspired by Marxism to ask, in their own distinct ways—often with irony, some of it tragic, some of it wry —what such a philosophy meant in a world that operated on the antithesis of communism: the free market.

They would be part of major moments in the history of modern art such as the formation of the Kerala Radical Painters’ and Sculptors’ Association, and a seminal exhibition in 1987 by this group at the Faculty of Fine Arts, MSU Baroda. Titled ‘Questions and Dialogues’, that show, featuring Rajan, Krishnakumar, Madhusudhanan and their associates such as Jyothi Basu, K Hareendran, C Pradeep, Alex Mathew, Pushkin EH, Reghunadhan K, KR Karunakaran and Anita Dube, released an accompanying manifesto denouncing the commodification of art and middle-class privilege in art production.

The evolution of these ideas is visible in the works put up for ‘Pond Near the Field’. It is here that you will find Krishnakumar’s powerful ink works exteriorising his inner world of imps and minatours, often featuring himself in them. The artist’s form—brush and ink—produces a sculptural effect that is powerful as well as minimalist, almost as a hat-doff to the Marxist value of austerity. Presenting an arresting set of sketches simply using the drawn line, Krishnakumar’s world consists of animals, human beings and machines in motion, all of them functioning as if cogs in the capitalist machine. A phrase in Malayalam reads: ‘Friend, we have to be vigilant here because you wouldn’t know when your eyes could be gouged out.’ Although the artist passed away in 1989, these works made in 1982-83 form the basis of his later sculptural works, says curator Roobina Karode.

It is also here that the sketches, etchings and lithographs of Surendran Nair reveal, in his own words, the beginnings of his “artistic vocabulary”. Early sketches by the artist—from random scenes in ramshackle hostel rooms to portraits of his peer group including the other four and Anita Dube—tell of the lives and friendships they shared. These early drawings and prints build the vocabulary of ideas that Nair would later employ in various forms. The big hero in Nair’s text-visual paintings is humour, a critical tool according to the artist. “Humour helps you [gain] distance from your subject. Humour has so many levels… satire, irony, nonsense, all have their distinct utility,” he says. Nair’s use of humour would greatly feature in later works like his Labyrinth of Eternal Delight—a series of 26 etchings. These visual commentaries are simultaneously Nair’s playful odes to his heroes (there are monuments to Duchamp, Gandhi and Aristophanes) as well as his reflections on the absurd but lived realities of human existence. Monument for a Perpetual Pessimist shows a spherical-object with an open window. Only, it shows the night sky, perhaps as a comment on the very real futility of following hope: wherever you see an open window, you will see it’s also dark. Another work titled For Those who Run too Fast shows a boot with a spike under it, and a snail under its heel. The symbolism could be read as Nair’s critique of the capitalist value of ‘speed’ with all its victims. The most incisive of these is one titled The Mythology of Civilisation, showing a clock: the hands are designed to move and come right back to the same spot. The image is reflected under a different header, ‘The Oracle of Delphi’ . Had this been predicted? “The Labyrinth series is a critique of our times: a shift was marked in 1975. The Emergency unleashed these forces of religious and sectarian violence which were lying buried till then. Using humour, these works record the trauma within our history,” says the artist.

Another artist comrade who employs humour is CK Rajan. His works use a variety of media—discarded cigarette packets, newspaper and magazine clippings of which he makes collages, all material that is ubiquitous and by extension democratic, ridding art of its position of ‘privilege’. His In Search of Utopia (1989-90) series of flattened cigarette-wrapper paintings is a comment on the utopia dreamt up by his fellows, says Karode. The self- awareness is apparent, given the inseparable relationship most communists share with cigarettes. That they are produced in waste, lends it poignancy.

Rajan’s Mild Terrors series, a set of collages he made over 1992 to 1996, are a comment on the contemporary Indian reality wrought by economic liberalisation. “It captures the changes that took place in India during the first few years of economic liberalisation, the aggressive pace of development within cities, and the growing social disparities. The artist responds to a visual world that seems to have become unreadable due to startling, often uncomfortable juxtapositions, where the pre-industrial, industrial and post-industrial coexist,” says Karode. Images of industrial structures with smoke billowing out of them and smiling red lips in the corner or a government building with a massive eye staring out would be simply funny were they not so terrifyingly real.

The most resounding eulogy to Marxism comes from Madhusudhanan who describes it as “the longest and greatest dream seen by the human race” and “the greatest wave in the history of human thought.” “The ship of human life travelled up and down this wave,” he says. “There was a lighthouse on the shores of my birthplace; these drawings have been created as image fragments made visible by its sweeping light. Light coming and going continuously, like memories, become visible in this present day darkness,” he says. Madhusudhanan’s series The Logic of Disappearance: A Marx Archive, a set of 60 drawings, is a stunning ode to these binaries of ‘light’ and ‘darkness’, a black-and-white set of works that is a “dialogue with historical personages like Karl Marx, Vladimir Lenin and Joseph Stalin who appear as fragments from a certain past,” says Karode, “yet perhaps they also point accusatory fingers at the turbulence of the neoliberal present, from Ukraine to the Middle East.” It alludes to the fall of the Soviet Union in 1991, following which enormous statues of communist leaders started being taken down in many places. The series has been exhibited at the second edition of Kochi Muziris Biennale (2014) and the 56th Venice Biennale (2015).

Where unbridled adulation and glorification of figures such as Stalin problematises Madhusudhanan’s work, others like CK Rajan and Surendran Nair get away by espousing similar values in the heavy injections of humour they use. NN Rimzon does the same by enlisting a poetic form.

Rimzon’s works can well be described as visual poems—assembling entities as diverse as stars, ponds, skies, brick kilns and shrines together into his fluid canvases. The front piece of the exhibition ‘Pond Near the Field’ works to recreate this imagery in which nature is used as a metaphor for human behaviour. “When the pond reflects the sky and stars, the same way, humans reflect each other, and this reflection of each other creates a wholeness,” he says. “The pond’s round shape is a primordial shape that also signifies transformation, a transformation to a greater reality.” The wholeness plays out even in works that depict a brick kiln, that most exploitative of industries for manual workers, by sheltering it beneath a star-studded sky.

The idea of wholeness forms the central core of Rimzon’s work, placing his practice in the precarious position of spiritual Marxism. In Rimzon’s works, surprisingly for a Marxist artist, there are references to shrines, gods and goddesses. Although Rimzon insists that his form of spiritualism is strictly secular, a veiled critique of Marxism is apparent in this idea. “Marxism is dialectical materialism—it is to do with the material aspects of life. Man doesn’t live on material aspects alone. When you speak of the spiritual, you speak of more than the earth; you also speak of the sky. The idea is to understand the depth of human experience, and that is the reason art, music, poetry and literature exist.”

Rimzon says he disassociates from the school of Marxism that concerns itself only with material reality and ignores other aspects of human existence. “That kind doesn’t lead anywhere and cannot provide any real solution to the world’s problems. That is the reason for the failure of Marxism, the Soviet Union, etcetera—lack of humanism. When you layer it with secular spiritualism, that is when you get humanism,” he says.

Despite their differing versions of Marxist philosophy, what emerges is their shared vocabulary and histories. Rinzom’s “reflected surface” finds resonance in Nair’s thoughts on their friendship. “It was only these reflected ideas that helped us grow this way,” he says. Rajan’s works speak the same language as many of Nair’s works: quirky, with text well used. Idealogically, there is an attempt to problematise Marxism by several of them. Nair makes the distinction clear between Marxist thinking as it plays out at various levels—political, social, economic, and artistic—versus Marxist party politics within the country (the latter having lost much ground and gotten eroded over the years). At a visual level, this mirroring takes place throughout the KNMA, with many of these artists drawn by their peers, in different portions of the hall. The museum almost seems to come alive with these faces and voices in conversation across time and space.

Madhusudhanan’s light, it would seem, illuminates not just the shores of Kerala but the minds of an entire generation of artists.

Increasingly, though, the light gets eclipsed alternately by its own angular shadows and the blinding glare from the malls outside.