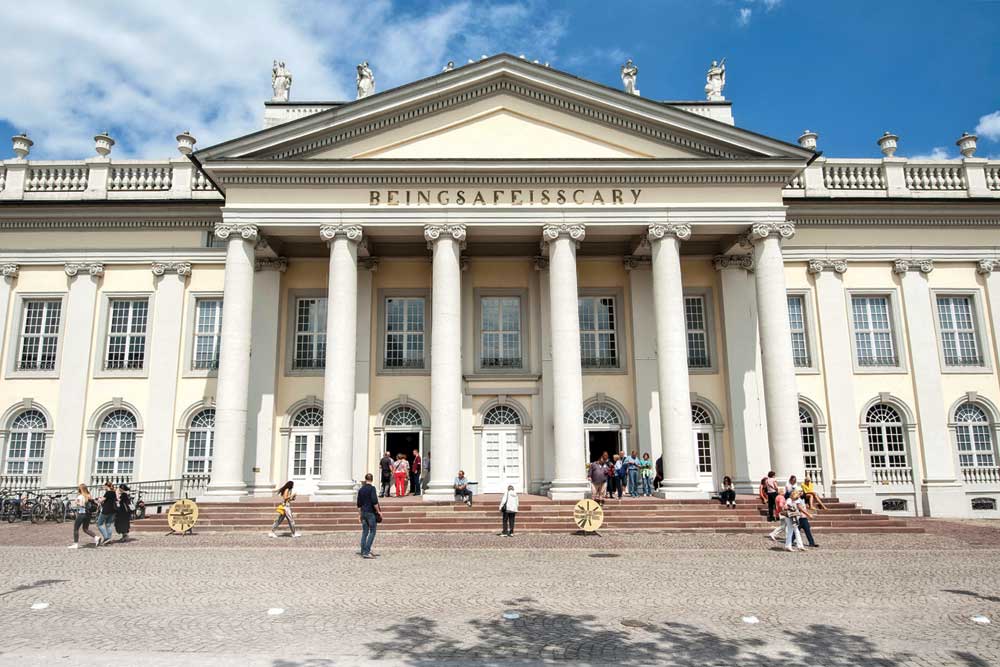 WITHIN THE FINAL 30 minutes of the seventh edition of Experimenter Curator’s Hub, Pedro de Almeida, programme manager at the Sydney-based independent, not-for-profit, 4A Center for Contemporary Art, responded to a pivotal comment by his fellow speaker, Ruba Katrib, by summarising the satirical gist of Tom Wolfe’s 1970 essay, Radical Chic: That Party at Lenny’s. The setting is Leonard Bernstein’s 51st birthday party at his 13-room apartment with an illustrious 90-person guest list that doubled up as a fundraiser for the Black Panthers. The titular Radical Chic sardonically implied Wolfe’s reading of the elitist desire to be perceived as sympathetic to a purportedly sexy, radical cause, so much so that the servants at Lenny’s party were White, not Black. The initial elation about being in the same room with the savvy, chic-looking Black Panthers in their genuine afros quickly shifts to nervousness when the conversation moves towards the Vietnam War, on which there are mostly shared opinions. “What’s not to abhor about dropping napalm on Vietnamese children,” De Almeida summarises. When the Panthers, however, bring up the subject of a similarly bloody ongoing war in Palestine, the guarded cool presence of the radical Black activist group turns to one of confrontational questioning. “Lenny, what are these negroes doing at our party?” De Almeida delivers the punch line.

Wolfe makes Lenny and his social circuit of intellectuals the butt of the joke by exposing their solidarity with the Black Panthers as both the consequence of a passing trend and a form of cultural appropriation, much in the manner of many Euro-American institutions that describe art worlds in the global south as ‘nascent’, as if oblivious of the many individual trajectories that have evolved over the years. A recent critique by Yaman Kayabali of a headline in the Guardian about the recently unveiled show at the Tate Modern of the Istanbul- born artist, Fahrelnissa Zeid, that read, ‘Tate Modern resurrects artist forgotten by history’, highlights this problem. ‘But who, exactly, was Zeid forgotten by?’ Kayabali asks as he examines similar headlines in Western publications that are symptomatic of the West as saviour of lost artist histories. ‘Zeid was not forgotten by history, just by Europe,’ Kayabali writes.

Tendencies such as these are more than revealing of a coloniser mentality that seeks to control the overarching discourse around what constitutes art, what is modernity, and who should be offered the privilege of having their voice heard, based on degrees of marginalisation.

Post-colonial discourse has been part of educational systems for a few decades, but the proclivity towards continuing the colonising mission through art is still predominant on the part of the Western art world. That it is being called out more aggressively today by artists, art writers and curators who belong to the global south, and who are tired of pandering to the limitations of the Euro-American gaze, tells of a massive intellectual shift. De Almeida’s succinct recounting of Wolfe’s essay made of it a parable about the cultural and historical blind spots in an international art world that is still dominated by Western approximations of the geographical locus of where regions exist in relation to their navigational compass.

De Almeida was also extending Katrib’s cautionary words about the dangers of not acknowledging the sordidness of the money trail that has funded so much high art. Katrib is a curator at the Sculpture Center in Long Island, New York, where in 2017 she had mounted a subversive exhibition of figurative cacao sculptures by the Congolese Plantation Worker’s League, who harvest raw material for international companies. In the concluding minutes of the Hub, she, too, had found herself inadvertently contributing to what Experimenter’s blogger Skye Arundhati Thomas had enumerated during her observations at the three-day Curator’s Hub in Kolkata, the erstwhile capital of the British Raj, namely: ‘How can curatorial practices be one of resistance, and more than that, how can we move towards a decolonisation of practice, and not just of the mind.’

Katrib raised a point about the importance of being apprehensive about sanitising art, especially in relationship to dirty money. “As a historian, writing about England, its colonial history, art patronage developed out of slavery, creating a sanitised distance between the brutality of slavery on the plantations, through slave owners, and doing that through high art and culture. That’s the history of institutions in the Euro-American context,” she had said.

Could the curatorial gesture be positioned such that it could strategically mobilise privilege? This was the conclusive question that arose from the collective of presentations that were made by nine invited curators who represented not just diverse cultural backgrounds but also an academic plurality. Natasha Ginwala, who has been the Hub’s moderator for five consecutive years and is curatorial advisor for Documenta14, had kicked off the hub’s proceedings by invoking lines from a poem by Cecilia Vicuna’s poem, ‘Language is Migrant’:

‘Language is migrant. Words move from language to language, from culture to culture, from mouth to mouth. Our bodies are migrants, cells and bacteria are migrants too. Even galaxies migrate.

Ginwala ended her introduction with an image of Turkish artist Banu Cennetoglu’s work that sits on the façade of the Fridericianum in Kassel, typically the ground zero of the quinquennial Documenta. The text that replaces the Fridericianum signage is composed of 10 aluminum letters borrowed from the institution and six letters cast in brass after the existing ones. It reads ‘Being Safe is Scary’, which Cennetoglu found as graffiti at the National Technical University of Athens. “It was not just a stable structure,” Ginwala said. “This was, in fact, where thousands of books were burnt in 1933 under the Nazi regime.”

London-based curator of Pakistani origin, Hammad Nasar contributed hard-hitting arguments about the nation as a cultural construct, and how the process of de-colonising the curatorial practice needed to be accompanied by that of de- imperialisation. The recognition of institutional privilege was important for any of it to culminate in mobilisation. Nasar also warned that history, articulated as singular, connoted propaganda, and not necessarily either truth or fact. In addressing some of the challenges inherent in staging a retrospective of the late, beloved Baroda-based artist, Bhupen Khakhar at the Tate Modern in June 2016, Nada Raza, research curator for Tate Research Center, made a provocative argument about how an audience’s subjectivity, whether colonial or broad-minded, could significantly impact the reception of any exhibition of art, particularly if its contents, or ephemera, were works made by an artist from a post-colonial, third-world setting, who has had a specific experience of embracing modernity as well as traditional practices. Raza indirectly addressed Ginwala’s later provocation about curatorial responsibility by questioning how much context a curator was expected to provide an audience. “Do we still have to have these tired conversations about Indian subjectivity and the body on the global stage?” she asked. Roobina Karode, who has been credited with reintroducing the global art world to the work of another Baroda-based artist, Nasreen Mohamedi, similarly expressed the responsibility she had towards translating her teacher’s practice without couching it in the Euro-American understanding of abstraction and minimalism by elaborating upon Mohamedi’s understanding of Sufism and the dilemma of dealing with a body afflicted by Huntington’s disease.

It was Reem Fadda, ex associate curator of Middle Eastern Art at the Abu Dhabi wing of the Guggenheim, who made the fiercest arguments in favour of revolutionising the existing language of art discourse, candidly threatening to quit the art world if the oppressive vocabulary it invariably espoused continued its relentless operation. Fadda, of Palestinian origin, had no reservations referring to her curatorial role as that of a lobbyist and shared details of her dream project, which would be the culmination of some of the ideas she espoused and a response to the collapse of Palestine’s liberation project. “What if I did a project from a grass-roots level, to really distill my experience as a curator who has conversations with the intellectuals around me,” she said, referring to her dialogue with intellectuals that has become part of her daily life. “What if I created a platform where I use the same tools, but instead of applying it to my context, I go out, to taxi drivers, students, and even create an online platform where there can be a distilled summary of these conversations available to a vast network. Maybe then there’s a repository about collective discussion.” Fadda’s aspiration is to realise this project within the institutional ecosystem of a museum. “Why can’t a museum be a beacon of a socio-cultural project like this?” was the question she left the audience with.

Wolfe’s essay still resonates with the now that we inhabit because it compels its readers to re-examine the notion of privilege and cultural appropriation that it exposes. Who gets to speak and why, its rhetorical corollary, articulated by Chris Kraus in I Love Dick when she speaks of the dominant narrative of art criticism’s rejection of feminist art, is another still relevant interrogation, one that implicates the nexus of critic, curator and institution. Where past editions of Curator’s Hub dealt with many anxieties of curating as an active verb and with the entity of the curator, this seventh one was not afraid to confront and counter the most pressing dilemmas that afflict the contemporary art world while stressing, urgently, the need for any curator’s position to be unequivocally humanitarian.