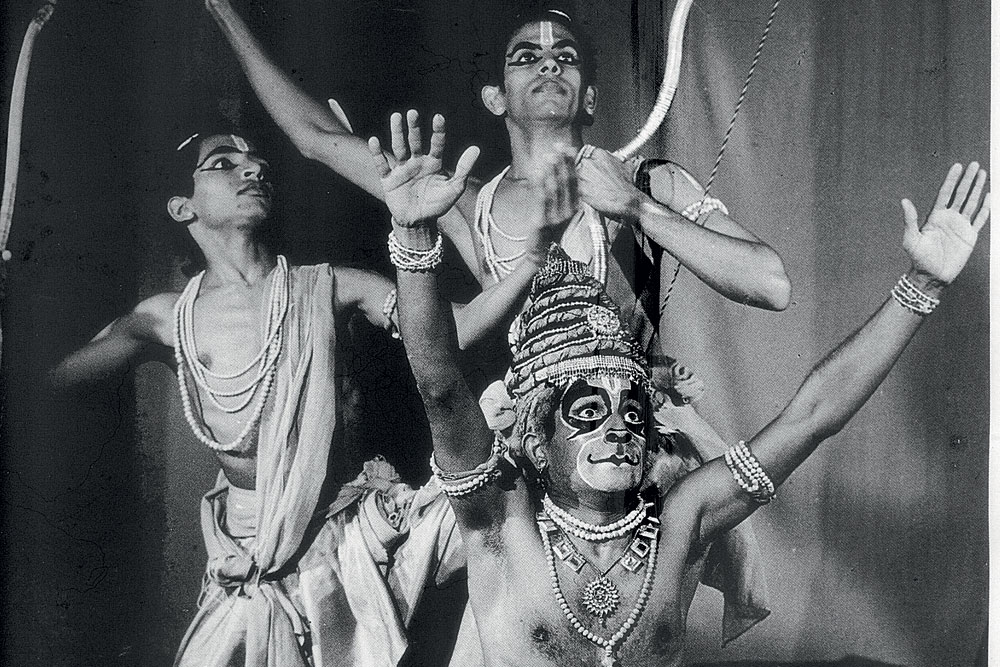 
ON AUGUST 25TH, 2019, a great dancer passed away at age 79 in Chennai. How many people knew what a loss it was? No, CK Balagopalan’s death did not make headlines. No matter. He had made his contribution to the world. As a true artist he had fulfilled his responsibility without compromise.

A few years ago, I had done detailed video interviews of several alumni of the Kalakshetra Foundation, Chennai. Spontaneous, impulsive, oblivious to the camera, Balagopalan (Balan to friends) made a splendid raconteur, recalling his life as disciple, repertory artist and teacher at this world-renowned institution of the performing arts, founded by Rukmini Devi Arundale.

When I reminded him how, as a pig-tailed student at Kalakshetra, I used to peep through the window as he rehearsed his leading part in Gita Govindam, Balan smiled, and suddenly slid from chair to the floor with a single order: “Sing!” In a split second he had morphed into a kneeling Krishna begging Radha to place her tender foot on his head to cool his burning ardour.

Balan was 72 years old then, wearing an old veshti and a limp kurta. There was no one to watch his performance on the verandah except the cameraman, the sound technician, and a stray dog. Did he care? Why would he? For Balan was in Brindavan, sporting with his love, until the song ended, and he thudded back into the present.

Short, dark, small made, somewhat shy, with a slight squint to boot, Balan was hardly the kind of person anyone would identify as a charismatic stage artist. A writer or painter, yes. But a dancer playing larger-than-life roles as a mythic hero? However, Rukmini Devi, the guru whom he adored and worshipped, taught him a great secret; “An artist plays a character, not with his body, but with the mind.”

Rukmini Devi’s first impression of Balan had been most unfavourable. The child looked distracted and scatty. The village boy was in Madras only because his school master father (whose passion for the theatre had earned him the title of ‘Malabar Charlie Chaplin’), entrusted his son to Chandu Panikker, the eminent Kathakali artist and resident ashaan (teacher) at Kalakshetra. Panikker had come talent hunting in rural Kerala, to find young male dancers for Rukmini Devi’s Ramayana dance dramas. As Balan accompanied him to the big city, Panikker’s friend turned up on the train and begged the guru to take his son Dhananjayan as well. That is how Balan made his friend of a lifetime.

To the boys Madras was another planet altogether. “And then I saw Rukmini Devi! She was a goddess!” Balan recalls. “As Ashaan led us in she exclaimed, ‘Here comes Viswamitra with Rama and Lakshmana!’” Closer inspection changed her mind, “Send the boy with the squint back,” she said. Balan got to stay only because Ashaan promised to get his eyes corrected with Kathakali exercises. Which indeed he did.

The other boy who joined by chance became the star pupil. Dhananjayan was smart, handsome, quick to learn and win approval. Balan remained slow-witted. All the lessons were so much water off a duck’s back. Panikker was a brutal task master who thought beatings were good for the disciple’s soul. An appalled Dhananjayan forced his friend to practise in order to prevent the thrashings. But nothing could stop Balan from playing truant. He was found hiding on top of some tree, or on the football field playing with the boys of the Besant Theosophical School next door. The boys were overjoyed to find a superb goal keeper in the wiry interloper. He broke hostel rules when he ran off to watch movies. The next day he would entrance the boys with his perfect imitations of Sivaji Ganesan and MG Ramachandran.

Balan simply didn’t fit in. “After two years of wasting time, Athai (Rukmini Devi was the universal aunt on the campus) decided to send me home. But Rukmini Devi’s initial vision had to come true. When she began to choreograph Sita Swayamvaram, first of the Ramayana series, somehow I became Lakshmana to Dhananjayan’s Rama, with Ashaan as Viswamitra! Dhananjayan kept me on my toes, made sure I did enough to satisfy our teachers!” said Balan breaking into laughter.


But a new trial began. The more he saw Rukmini Devi choreograph, the more he fell in love with Bharatanatyam. Panikker was enraged by this switch in “loyalty”. Balan explained, “I respect Kathakali tremendously, Ashaan was spellbinding on the stage. But Athai took my heart. I wanted to do the dance that she had taught all the wonderful teachers there—Chinna Sarada, Pushpa, Jayalakshmi, Thangamani!” However, personal hurt did not prevent Ashaan from giving the boy his ultimate accolade. “People will notice you even if you simply run across the stage.”

Playing role after role, small and big, positive and negative, Balan made a discovery. “The more I performed the more I learnt about life. Gradually I realised that art is not about the artist showing off his skills, but about understanding other people, good and bad, innocent and wily.” Audiences were amazed by his versatility in playing contrasting characters with equal conviction—the clown (in Kalidasa’s Sakuntalam) or the tribal warrior devoted to Siva (Kannappar Kuravanji). He brought a whole new dimension to the traumatised Bharata in the Ramayana series, as he begged his brother Rama to return from exile and accept the throne. “When I found Rama in the forest and embraced him, my tears were not the tears of Balan but of Bharata. Even now when I think of Bharata’s selfless love my hair stands on end! I knew that only sadhana—not rehearsal—could help me reach that level of devotion. You see, I had to communicate the noblest feelings we humans are capable of.”

But Balan could also switch back and forth between apparent saintliness and hidden lust, as he pulled off a cameo of the Ravana sanyasi, demon king disguised as holy monk. “I did whatever Athai wanted me to do. Small and big made no difference. Mind you, you have to really slog to make the small role work!” he would say with a chuckle.

Kalakshetra housed Sanskrit scholars who explained the myths, librettos and dance techniques in detail as part of performance training. Great musicians lived on campus and the youngsters heard them discuss story and character as they composed music for the dance dramas. But Balan’s art sprang more from instinct than intellectual analysis. He had the ability to innovate on the spot, and this touch of the unpredictable endeared him to audiences.

What a Machiavellian Sakuni he made! The master gambler from the Mahabharata who strips the righteous Pandava king of kingdom, brothers and wife. How he turned each move into a taunt as he found myriad ways of throwing the dice! Balan had indeed devised a whole language of sidelong glances and sadistic gestures for this villain.

However, his best role was the one everyone thought he was most unsuited for, a character with whom he had nothing in common, physical or mental. How could Rukmini Devi make the huge blunder of casting short and slender Balan as the great and glorious Hanuman? Balan himself was aghast. But she remained adamant, reminding him once again that stature was a matter of the mind, not body. “I know you have it in you!” she assured him. Four generations of viewers know she was right. To them Balan became synonymous with Anjaneya.

Through the 30 years of playing Hanuman, Balan practised his own personal rituals of abstinence and purification. He learnt from his teachers that Hanuman had animal and divine attributes, he was unmatched as warrior and philosopher. To play such a role demanded not just sadhana, but surrender.

“I don’t know how Athai saw a giant in me!” he mused. “All I know is that in the scene where I take visvaroopam, the gigantic form bestriding earth and sky, I found an electric current coursing through my whole being. My breath became fierce, potent. I didn’t see my fellow artist on the stage, I saw Rama, Prince of Ayodhya, standing before me. When I discovered the abducted Sita, my grief and rage were not drama but what I felt in my pulse and blood. When I said to her, ‘Pasya devi anguleeyam, look, here’s your husband’s ring,’ I trembled with emotions that came from who knows where. They say that Hanuman is always present when Rama’s story is told. Was he present in me at that moment?”

He had his regrets—who doesn’t? A major one was that Kalakshetra did not foster solo Bharatanatyam, which he loved. He saw his colleagues who left the institute gain the kind of recognition and rewards which he never did. True, critics and reviewers raved about his performance, audiences thundered approval, but Balagopalan was always identified with the institution and its dance dramas.

Balan could also switch between apparent saintliness and hidden lust, as he pulled off a cameo of the Ravana sanyasi, demon king disguised as holy monk

Nor did a brief lucrative Singapore stint work; he returned to his guru and his alma mater.

When he launched his own Balanrityalaya after retirement, it was too late to pursue that dream. With support from wife Leela and son Pranesh (who opted for hotel management) he continued to dance in Kalakshetra’s productions and train students, including daughter Prithvija, a highly talented dancer.

In his twilight years, he became a mentor to many seeking students. He was always ready to attend their performances and give advice. Though everyone gave him respect, the old and young also felt he was a friend.

CK Balagopalan belonged to a generation with its own code of satya and dharma. Art must be practised and taught ‘untainted’ by commercial transactions. A lifetime’s devotion to the guru was the disciple’s duty.

That is why he swallowed his sorrow to do his guru’s bidding—she told him to stay back in Delhi for the Ramayana performance when a telegram announced his mother’s death. “Long years later, I got over my guilt and grief when I was with my ‘mother’ at her death bed. Rukmini Devi died with her head on my lap. Didn’t she always say I was her son from a previous birth? After all, I owe everything to Athai, Ashaan
and Anjaneya!”