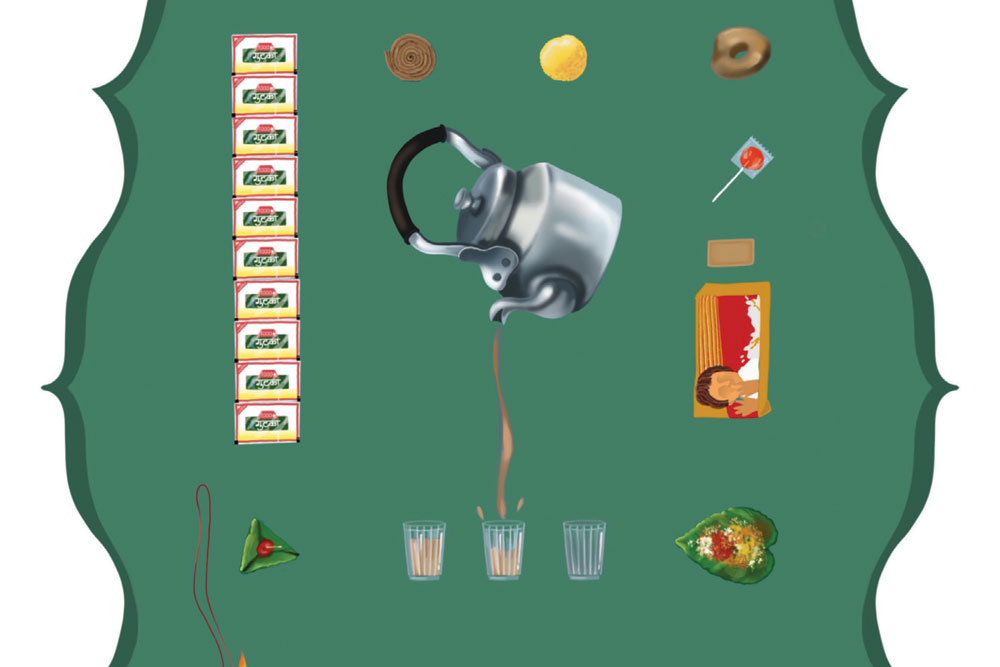 
IN AN IDEAL world Shreya Daffney aka Chintam would have been a full-time artist, making a living out of doing what she loves the most. As a successful practicing architect, Daffney has spent the last decade in the hurly-burly of the upwardly mobile life in Bengaluru, chasing professional success and personal milestones, like any average Indian youngster. But in early 2020, just before the Covid-19 pandemic struck, the 28-year-old found herself moving back to her hometown Udupi. “In hindsight, it was a blessing in disguise,” says Daffney who’s been painting and sketching since childhood but hardly ever got a chance to publicly showcase her art, which she describes in a lighter vein as “my brain vomit”. One day, without her knowledge, her mechanical engineer brother—a “crypto bro” literally—submitted her digital creations to WazirX to be sold as Non-Fungible Tokens (NFTs). To her surprise, not only did she make the cut but rather quickly became one of the “spotlight artists” for WazirX, a homegrown NFT platform linked to the Ethereum and Binance blockchains.

Thanks to the recent NFT revolution, Daffney is now fantasising about a not-so-distant future when art can be a lucrative activity as opposed to being an expensive hobby. Since May 2021, she has managed to sell 20 of her artworks on WazirX and Foundation (yet another NFT network championing the “new creative economy”) for a combined total of 6700 WRX (WazirX’s own utility token) or approximately ₹ 6.60 lakh. “I have had my reservations about monetising my creations only because I want to have full control on how, what and when I make art. I do take up art commissions from time to time but am rather picky. Only after dabbling in NFTs did I realise that I could have the best of both worlds,” says Daffney. She can’t believe that she spent all these years in Bengaluru mingling among the art fraternity without much financial success. “Now I can do this from a town that’s not even three-tiered. This kind of power and freedom is a win-win. NFT is a game changer,” she adds, with a beaming face.’


Mumbai-based Farhan Khan (online handle ‘ripfarhan’) is yet another cool crypto artist who strongly feels that NFT is here to transform the art world. A computer nerd since the 9th grade, the multidisciplinary artist and graphic designer jumped onto the NFT bandwagon in June 2021. One of his top-selling works on Foundation is a surrealism-infused video titled Mixed Reality, which was snapped up by an American buyer who goes by the name sendrock for 0.25 ETH ($797.78) within hours of listing on October 13th, 2021. “Selling an NFT which you have created or bought is empowering,” says Khan, who is only 18. “This new medium is doubly exciting for me since I am both a creator and collector. I see one hell of a career in this.”

Khan and Daffney are not alone. A new cohort of digital creators across India is clamouring for a piece of the NFT craze. According to one CNBC report, artist Amrit Pal Singh racked up over $1million, vending 57 NFTs in a span of just nine months! An NFT, short for Non-Fungible Token, is a unique digital asset promising to offer its buyer an inbuilt key of authenticity or proof of ownership, which is recorded on a decentralised public ledger. The industry sits at the unusual intersection between art, tech, finance and the web. What makes an NFT different from a 100 rupee note or a Bitcoin is that, technically, both of these are fungible items. In other words, you can exchange a 100-rupee bill for another and ditto with Bitcoin because their inherent value remains exactly the same. NFT, on the other hand, is non-fungible, which makes every one of it minted by the blockchain on which it is based an original. It also means it’s non-exchangeable. Marketplaces such as OpenSea, WazirX, Foundation, SuperRare, Rarible and others are where all the trading and selling takes place. Think of them as stock exchanges or aggregators that bring all the buzz and business to their ever-growing community of patrons, punters and speculators. To be a part of this clubby circle you have to get shortlisted first by getting an invitation from an existing handle. “Minting, in layman’s lingo, means you are permanently putting your work on a blockchain. Once you mint you cannot change it. You can only burn it, that is send it to a dead address,” explains Daffney, who continues to compose her paintings the old-fashioned way of pencil-on-paper before using her iPad to digitise them. “My workflow is all over the place, but it is fun,” says Daffney, with a smile. Her recent sold-out series Bhootas was inspired by a form of spirit worship endemic to indigenous tribes of India’s west coast. NFT art, she says, generally consists of GIFs, JPEGs, memes, animations, video clips, VR and other forms of digital experimentation.

For long, the art world has grappled with the difficulty of establishing provenance. Tracing an artwork’s origin and legitimacy becomes important especially when somebody is stumping up millions in its pursuit. Aparajita Jain, whose brainchild Terrain.art—is one of the first online galleries in India devoted entirely to NFTs— says the blockchain-powered technologies are the answer to the “provenance problem”. She recalls that when she started working with video art way back in 2010, “One of the biggest doubts our collectors had was, ‘How do I know this artist is not going to make multiples of this?’ Today, the solution lies in NFT because it’s transparent and accessible. The digital artwork you buy comes with a smart contract, which is more than just a stamp of quality. It tells you everything you need to know about the work. This information is there for posterity and no one person can manipulate it.” NFT evangelists tout its ability to create “scarcity,” which allows for a semblance of exclusivity. Scarcity can come in handy on the internet where an image is likely to be copied and circulated ad infinitum. To be sure, the NFTs you are buying, like any digital art, can be downloaded by anyone with a computer connection but the original code—or “bragging rights” in the memorable words of one collector—will always belong to the lawful owner. “Rest assured that if the artist has minted three limited-edition NFTs of his/her work it will only ever be three,” says Jain. 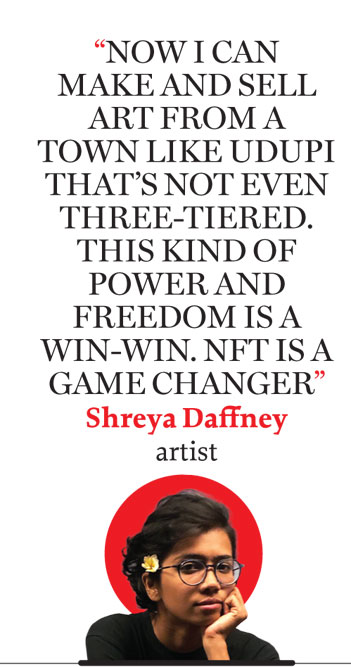 Though the NFT hype appears to be exploding in the West at the moment despite the recent turbulence in Bitcoin pricing, digital art in India has not taken off in a way that Jain and other crypto enthusiasts may have expected. On the far spectrum are the traditional art galleries that seem to be playing the ‘wait and watch’ game for now. “There is no hesitancy on our end,” counters Roshini Vadehra, of the Vadehra Art Gallery in Delhi. “But it seems unnecessary to enter the fray unless there is serious engagement. When we do dive into it, the project would have to be a meaningful one, not for the sake of a trend.” Always alert to the vagaries of the art market, Jain says, “We have to understand that many in the Indian art world are still a wee bit afraid of this technology. We don’t see the value in it yet. But soon we will be completely overtaken, because your next generation of buyers are changing. They will live much of their lives in an immersive virtual playground and they may not even have the same definition of art as their parents or grandparents did.” Jain is bullish on the metaverse space whose advent, she feels, will give rise to technology more cutting-edge than NFT. It might sound like a giant Duchampian joke but ambitious players in the NFT industry—Jamie Burke for one—have already started acquiring virtual real estate to build digital galleries and museums for their collectibles. “A Big Tech like Facebook doesn’t go about changing its name to Meta without envisioning how much bigger this is going to be,” Jain says, adding, “Eventually, it will percolate into the popular culture and that’s when the creator’s economy will get the maximum boost. Expect NFTs to be as common as sending out a tweet in the future.”

ACCORDING TO THE Guardian, the global NFTmarket has touched a staggering $22 billion, fuelled in part by Silicon Valley whales and their optimism. Its influential promoters include a ragtag group of poster boys namely Elon Musk, Mark Cuban, Michael J Saylor and the Winklevosses. Some might find the sudden success of NFT to be a mystifying phenomenon, but it seems everything and anything can be classified as ‘art’ today. The NFT clout even extends far beyond the art sphere. Its marketplaces have seen Jack Dorsey sell his first tweet for $2.9million and a LeBron James video clip fetch over $200,000! Hardcore CryptoKitties fans have lavished their riches on virtual cats. More recently, Indian celebrities such as Amitabh Bachchan, Ranveer Singh, Yuvraj Singh and Rajinikanth dropped their first NFTs.

On January 14th, Prinseps, an auction house, hosted an NFT auction of Gobardhan Ash’s figurative art. It had earlier helped a New York-based client drop NFTs of a work by MF Husain. Indrajit Chatterjee of Prinseps doesn’t think NFTs are a fad, as many of its critics have dismissively suggested. “It has the power to fundamentally change the status quo,” he contends, noting that most of Gobardhan Ash’s bidders were conservative buyers who are now intrigued by NFT’s latent potential. “So far, NFT has proved that it can aid the discovery of good art more efficiently and facilitate the transfer of ownership through exchanges, which will be a faster process than the prevalent gallery system of buying and selling.”

For all the evident excitement unleashed by NFT, the technology is not without flaws. For starters, regulators in several countries are sceptical of cryptocurrency. The Indian government doesn’t yet recognise it, due to fears of crypto laundering. Meanwhile, environmentalists are worried about the copious levels of energy consumption required for crypto farming. “Bitcoin mining uses more electricity than all of Google,” warned one Business Insider headline. Daffney opines that as far as crypto is concerned we are still in the beta stage; “We are the early birds. Who knows the ways in which this technology will evolve as we move ahead?” Jain echoes that sentiment. “Anything new is always dinosaur-ish. It’s never as slick as it needs to be. In fact, the next generation of tokens will be much more energy efficient.” Artist Farhan Khan’s gripe is the high gas fees: “Not everyone can afford such hefty sums, especially beginners.” Then there’s a growing issue of plagiarism, which has begun to beset a nascent industry. One of the rising NFT artists, Khyati Trehan, recently drew attention to her work being lifted on an NFT platform. “They’ve already been sold to collectors. What’s the next best course of action?” she tweeted. For her part, Jain replies that Terrain.art is constantly taking extreme precautions through technical measures such as watermarks and legal recourse to prevent plagiarism. “As the market matures and people are able to recognise the original creators, more processes will come in place to protect copyright,” she argues. She adds, “The journey of a thousand miles begins with one step and NFTs seem to be the first step towards a more equitable and fair future.”