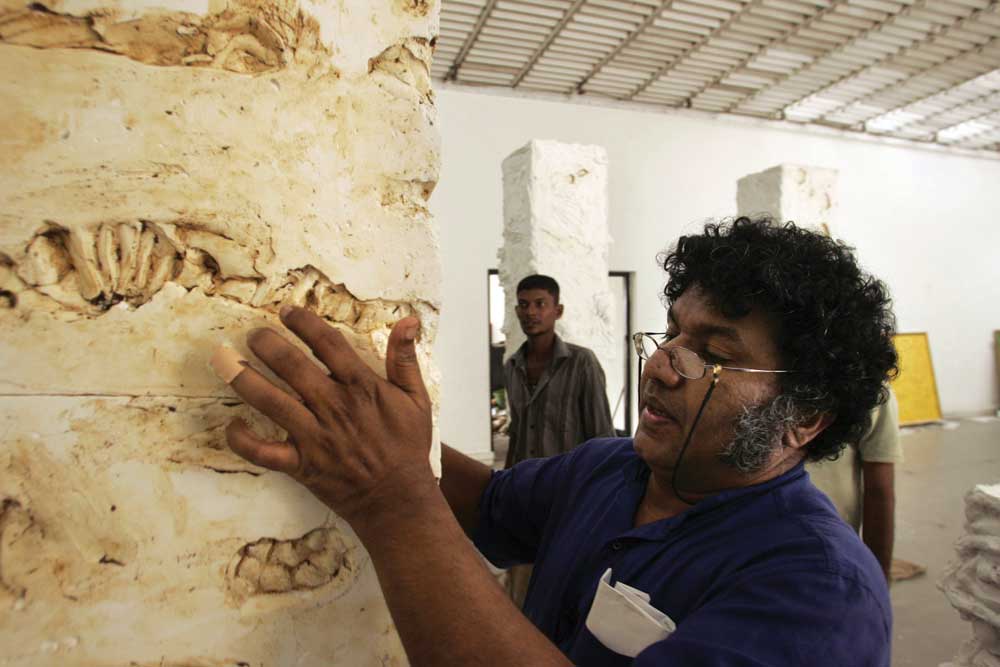 IT WAS 33 years ago, but Chandraguptha Thenuwara still remembers the group of men stopping the bus in Colombo and clambering on. They went from passenger to passenger, insisting that he or she say the Sinhalese words for pen and bucket— ‘pena’ and ‘baldiya’. Tamil tongues would contort around these syllables, making it easy for the assailants to distinguish one Sri Lankan ethnic community from another. Thenuwara, who is Sinhalese, was passed over. Others who struggled with the pronunciation were dragged off the bus to meet uncertain ends. The vehicle was waved on.

The year was 1983, and an ambush by Tamil insurgents had blown up a truck carrying 13 Sri Lankan army soldiers a few days earlier. There was immediate retaliation on civilians in the north. The unrest had spread, and now smoke was rising over Colombo as rampaging mobs set homes and businesses alight. Thenuwara wanted to see what was happening for himself, and he set out to walk from Colpetty to the predominantly Tamil neighbourhood of Wellawatte, a distance of some 5 km along Galle Road. “It happened in front of me. I can’t forget what I saw,” he says. “Wellawatte was burning.” All seemed to be anarchy, but the police stood by as the mobs wrecked vengeance and leaders were seen directing these attacks with the aid of electoral registers.

In the weeks and months that followed, the riots of Black July would loom over Sri Lanka’s national consciousness as an event that sparked an exodus of Tamil people from these shores and made conflict between the state and Tamil militant groups like the Liberation Tigers of Tamil Eelam (LTTE) seem inevitable. Hundreds were killed, many thousands displaced, and millions of rupees lost through arson and looting.

Thenuwara himself would leave the country to pursue a Master’s in Fine Art in Russia. He watched helplessly from a distance as Sri Lanka drowned in a bloodbath. As the violence escalated in the north and east of the island, insurrections by the Janatha Vimukthi Peramuna (JVP), a Marxist and Sinhalese nationalist political party, brought chaos and death to the south. When Thenuwara returned home in the 1990s, he found a country at war with itself, being transformed by encroaching militarisation. His response was to mount a challenge. In 1997, he held his first exhibition to commemorate Black July.

Today, the exhibition is a long- running tradition. This July will mark the 18th time he has held it, only having missed one year in the middle. It is a singular event in many ways, not least because of Thenuwara himself.

Among Sri Lanka’s foremost contemporary artists, Thenuwara is unique among his peers. He is an inherently political animal, as comfortable in front of a canvas as he is out at a street protest. He has often been invited to speak at rallies and talk shows.

“Thenuwara is widely recognised as both an artist and a political activist,” says Paikiasothy Saravanamuttu, executive director of the Centre for Policy Alternatives (CPA) in Colombo. “His exhibition every year commemorating July 1983 attests to his uncompromising belief that uncomfortable truths have to be confronted if reconciliation is to have any meaning, unity any value.” Saravanamuttu is frank about the risks Thenuwara has taken in being a vocal critic of the state, even during times when such outspokenness was met with threats and assassinations.

Having seen him in action many times, Saravanamuttu says that Thenuwara is a particularly compelling speaker. “He does not make political speeches like a politician. Instead, he is charming and articulate. He has a biting sense of humour. He is in every way a political artist.”

Thenuwara has always drawn strength from time spent outside the studio, in the thick of the crowd. The last time he received a death threat before a rally, he went anyway, hiding his face under an umbrella as a friend smuggled him past the men waiting with rods and batons. His sculpture Monotony could be inspired by the experience—it features a hulking, faceless soldier crouching behind a shield. From his back descend arms like tentacles, each clutching a rod. The figure polices a series of others; the incarcerated are trapped in solid brick, only their heads are left vulnerable and bare; their mouths are sealed shut. The black metal figure is oppression and violence given physical form.

Strangers who recognised Thenuwara in supermarkets would come up just to say, “Thank you for your courage, but please be careful”

When he is not hiding under umbrellas, Thenuwara’s face, framed by bristling white sideburns, is familiar to many.

Thenuwara was in the limelight in 2014 when he was president of the Federation of University Teachers Association (FUTA), which was leading a protest demanding the state allocate more resources for education.

He was a prominent voice in the Platform for Freedom and he remains active in the organisation Purawesi Balaya or citizens’ power that served to mobilise opposition and dissent against the Mahinda Rajapakse government, which culminated with a dramatic electoral defeat for the incumbent president in January 2015.

SEEMINGLY FEARLESS, THIS artist’s outspoken critique of war, human rights abuses, militarisation, censorship and authoritarianism has seen him cast by his critics as unpatriotic and anti-national. Yet, every year, he produces a new collection of work that engages critically with contemporary politics. He has kept in touch with the national conversation, one year marking our grief over the countless disappeared civilians and the next confronting militarisation through a series inspired by camouflage.

For ‘Chandraguptha Thenuwara: A Retrospective’ (Saskia Fernando Gallery, 2009), Qadri Ismail wrote ‘the force of Thenuwara’s work isn’t only political and aesthetic, but intellectual and ethical… It insists that art cannot be concerned only with the formal, the beautiful, but must also say something, be responsible (to the other).’

Anchored in this approach, Thenuwara has produced a new artistic vocabulary, rich in symbol and motif. He is perhaps best known for Barrelism, a series of paintings and installations inspired by the streets of Colombo when they were thick with military checkpoints. The tar barrels of his childhood had been repainted in camouflage colours of green and black, with yellow highlights, and used to delineate the boundaries of army checkpoints. To Thenuwara, “those colours were both intended to camouflage and be visible at the same time.” He explains that checkpoints would be put up only in neighbourhoods of some strategic importance. “I wanted to know who they were protecting. It was not [regular] people. They were stopped and questioned, and lived life outside the protection of the barrels.”

In the post-war context, he incorporated barbed wire into his work, a reference to the way internally displaced civilians fleeing the warzone were fenced in at places like Menik Farm. For his exhibition on the Urban Regeneration Program—which saw thousands from Colombo’s low-income settlements evicted—Thenuwara created a mosaic you had to walk over. Embedded in the floor, it mimicked the new walking paths springing up all over the city. Inscribed on the tiles were the dates of riots and massacres, and in a particularly visceral piece, bone fragments were combined with the jumble of building materials.

“Thenu, as an artist working in a community, confronts us with images, motifs from our everyday, sometimes before we have identified them ourselves,” says Jake Oorloff, founder and artistic director of the Floating Space Theatre Company. Explaining that Thenuwara’s art has often provided inspiration to his company, Oorloff adds, “His work challenges the status quo, the narrative; he subverts the power of the motifs and complicates the narrative, sometimes to the point of mockery. In this way, he has contributed to an artistic vocabulary, something that is not limited to one artist or one practice but influences the way other artists and artistic communities start communicating.”

Thenuwara and his wife, the activist Kumudini Samuel, live with their son Charu in a lovely home. Their living room looks out over a narrow canal, studded with lotus flowers, which borders a bird sanctuary. Sitting at her dining table, Samuel tells me, “Each year Thenuwara’s exhibition is a critique of what is happening at that time. I can see the way his politics have evolved, and that evolution is the story of our lives.”

She recalls a time in the years immediately after the war when dissent was dangerous. With journalists and activists being targeted, strangers who recognised them in supermarkets and doctors’ waiting rooms would come up to Thenuwara just to say, “Thank you for your courage, but please be careful.” Samuel, who had herself been questioned by the CID because of her human rights activism, says she worried that Thenuwara’s life was at risk. But he would not agree to be more cautious. “Now is the time I need to speak,” he would tell her.

Both this courage, and the ideology that underpins it, are rooted in his childhood. Thenuwara grew up primarily in Ampara, the son of two teachers. His father Gunatilaka’s strong socialist politics led him to lose his job, along with 123 other teachers in a controversial incident in 1956. But that was not the last blow. Thenuwara and his elder brother Rohana both came down with diphtheria. Rohana did not survive. Soon after, Thenuwara who was still very young, lost his mother Yasawathie to complications resulting from childbirth.

That tragedy, deeply felt, continues to haunt his work. Mothers are treated with a particular reverence, and the Madonna is a recurring icon. “It is because of my childhood that I learnt to take risks,” says Thenuwara. “Life is risk. That is why I am not afraid. Knowing that, I don’t want to be passive. I want to be active, looking forward, trying to change things instead of accepting the status quo.”

Over the years, his work has drifted far from the colourful, beautifully detailed portraiture that originally set him apart, moving instead to installations and sculpture and featuring more sketches and paintings in black and white. His friend and fellow artist T Shanaathanan points out that this commitment to producing an exhibition every July has had a mixed impact on Thenuwara’s body of work: “Sticking to an exhibition calendar and its focus on that previous year has become a kind of possibility, and also a kind of limitation. It confines him to a certain kind of palette and a certain kind of imagery. The colour palette is not in his hand, it is in the country, it is in the calendar.”

For his part, Thenuwara embraces this. With this year’s series titled ‘Glitch’ , he meditates both on the realisation of this country’s hope when it voted for Maithripala Sirisena in that historic election, and the ways in which the new government has disappointed the electorate since coming to power. The paintings burst with colour but are distorted by noise, static proliferating through what was once a perfect image.

Though he is celebrated in some circles, Thenuwara also knows that this comes at a price. Yet it is one he has willingly paid for decades. “You are doing work that usually cannot sell. People do not want to carry these tragedies back to their homes,” he says. But then, with a glint in his eye, he points out that even an unhappy viewer is an engaged viewer, and he wants that above all. He is content if he can make people question, even if what they are questioning is him. “People would love to forget everything easily, but I love to remind them,” he says.