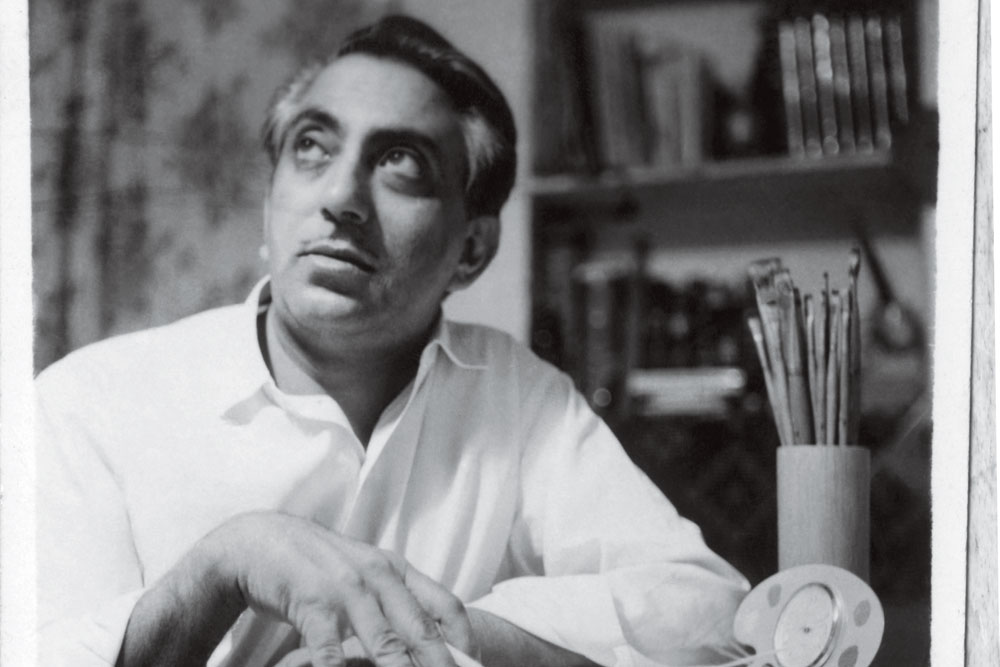 LIONISING THE FEMALE form as an allegorical ‘Mother Humanity’ protecting her children, artist Brij Mohan Anand (1928-1986) depicted the arrival of nuclear power as a fearsome skeletal figure wreathed in an atomic mushroom cloud. The large army boots worn by this ‘creature’ appear spiked and vicious in its attempt to crush the mother and her child, who are vulnerable, kneeling amidst a sheaf of grain surrounded by a flurry of doves. Throughout his oeuvre, Anand did not cloak his critique of colonial power and militarisation or his displeasure at India’s move towards nuclear power. One could say he was known as an anti- establishment artist. This pen-on-paper work was done by him in 1963 in protest of an impending nuclear test, which took place at Pokhran in 1974. It appears incongruent in today’s India that embraces both capitalism and nuclear power, yet it is an important slice of history that has been buried over the years. ‘Narratives for Indian Modernity: The Aesthetic of Brij Mohan Anand’ , a recently concluded exhibition at the India International Centre (IIC) and the accompanying monograph, resurrects his forgotten paintings, scratchboard sketches and illustrated posters.

The exhibition was curated by Dr Alka Pande, while the monograph (HarperCollins, 192 pages, Rs 2,499) is co-authored by Grant Pooke, an art historian from the University of Kent, and Aditi Anand, a historical biographer and trained lawyer. The exhibition was the result of an accidental discovery of over 1,500 works from the attic of the autodidact’s West Delhi home. The book documents Anand’s life and work from his early years all the way to his vast and largely unacknowledged coverage of India’s political realignment.

‘Anand was a maverick who lived on his own terms with an almost inflexible tone and tenor,’ writes Pande in her foreword to the book. He was born to a fairly affluent family; his father Mani Ram was a dentist, and his mother Bhagwati, a feminist. According to the text, Anand was close to his mother and she was presumably the subconscious inspiration for his image of ‘Mother Humanity’. ‘Anand was completely self-taught, as far as his artistic oeuvre went. He was naturally gifted, he drew, sketched and painted whatever he observed,’ writes Dr Pande.

The monograph succinctly maps Anand’s oeuvre—from his famed politically charged scratchboard drawings to erotic pencil sketches made in Kashmir, from bucolic landscapes peopled with peasants of Punjab to the publicity posters commissioned by the KBK graphic agency (Kul Bhushan Kumar) and National Council of Educational Research and Training, and his witty graphic brochures and pamphlets. Despite his affluent background, Anand supported his family only on the money he made as an artist, and found a following of friends, admirers and patrons. ‘He lived among a group of émigrés from the newly created Pakistan,’ writes Pande. Later in the book, we learn that in 1947 he fled from Lahore in Pakistan to Amritsar in India, passing off as a Pathan ‘due to his complexion and stature’. Partition was a time of great strife and Anand helped many families get across the border. Another major political event that deeply impacted the lives of Anand and his family was the loss of his brother Madan Mohan in the Jallianwala Bagh massacre in Amritsar in 1919. The incident perhaps hardened the family’s stand on anti-colonial rule, a recurring theme in Anand’s works.

Author Pooke indicates that it was challenging to work on the monograph since he and Aditi Anand started with a blank slate; there was very little available in the public domain on the artist. “The title of my contribution to the monograph, ‘Calls to Order: Modernity, Contemporaneity and the Cold War Aesthetic of B.M. Anand’ was [conceived] to provide a critical context to aspects of the artist’s practice and to offer an evaluative reading of some of the iconography of his work which is so distinctive but also culturally so layered and inflected,” says Pooke.

While the graphic posters, most of them made for blood donations to the Red Cross, are direct, his pen-and-ink drawings and scratchboard works are layered with symbolism. Scratchboard is a technique once associated with the way newspapers and manuals carried technical instructions and illustrations. ‘It was part of a distinctive aesthetic which together with a series of dystopian and apocalyptic landscapes, formed and sustained response to the politics of neo-imperialism and India’s own programme of nuclear expansion,’ write Pooke and Aditi Anand in their joint introduction.

An example of this aesthetic lies in the 1972 work, Stop Burning Asia (The Death (sic) Is Shadowing You) .This scratchboard work was Anand’s scathing indictment of Western imperialism during the Cold War and the impending Vietnam War. It pictured a newly converted indigenous American wearing both the feathered headgear of a chief but also the crucifix of a Christian convert. Seated on a pile of human skulls, he is about to set fire to the globe. Strapped to his back is another globe that depicts the US. Hovering over the indigenous American is another spectre, the grim reaper that represents the outcome of such acts. The composition is set against the cityscape of Washington DC and highlights Anand’s critique of the impact of neo-colonialism. A greeting card was fashioned from this scratchboard composition and Anand sent it out to various foreign embassies in India imploring them to take a stand against such acquiescence and apathy. ‘A bold intervention that no other artist of a newly independent India is on record as taking,’ states Pande.

Seen in relation to his contemporaries like FN Souza, MF Husain, Krishen Khanna, Tyeb Mehta and SH Raza, Anand was a misfit. While these Modern masters were concerned with ‘materiality and identity’, Anand was steadfast in the personal politics of a renewed ‘Indian Renaissance’. In essence, he was closer in ideology to the Bengal School masters and their beliefs, notably Chittaprosad Bhattacharya who also believed in lionising the proletariat. However, aesthetically both Pooke and Pande have cited artists like German Renaissance master draftsman Albrecht Dürer as a major reference for Anand. Where his lines are precisely executed with a sense of simplification and prominence, Anand’s scratchboard technique reversed figure and ground, where the figures are delineated by white lines and the background remains black (in drawings and etchings, it is usually the other way around). This lent his scratchboard works a stark and striking quality.

The monograph is presented in a hardbound square formatted book, with an elaborate mustard yellow jacket that echoes the aesthetic prevalent in Anand’s oeuvre. Slid out of the jacket, the cover is dominated by an image of the flying nymphet, a symbol of freedom and beauty. It contains many colour palates, family and archival photographs and a fairly extensive collection of Anand’s works.

Pooke recalls that the making of the book was ‘exhilarating, fascinating and exhausting’. The book was fed by his academic and research background in aspects of Cold War visual culture and Marxist-inflected art histories, albeit within a more occidental context.

“I have tried to be responsive to the specificity of Anand’s aesthetic and its context. Personally, one of the most affirming aspects of the project has been the strongly collaborative dimension which has underpinned its realisation,” he says, citing the support of the Anand family, the Anand Foundation and his working relation with Aditi Anand and Pande.

“As an art historian, I hope that we have at least provided a critically evaluative platform through the publication and the exhibition, which will support and assist further academic research, scholarship and engagement with such a previously overlooked aesthetic and legacy,” says Pooke. “If the exhibition begins to encourage more engagement with a generation of figurative artists—men and women who did not join India’s progressive diaspora—it would have served a purpose.”