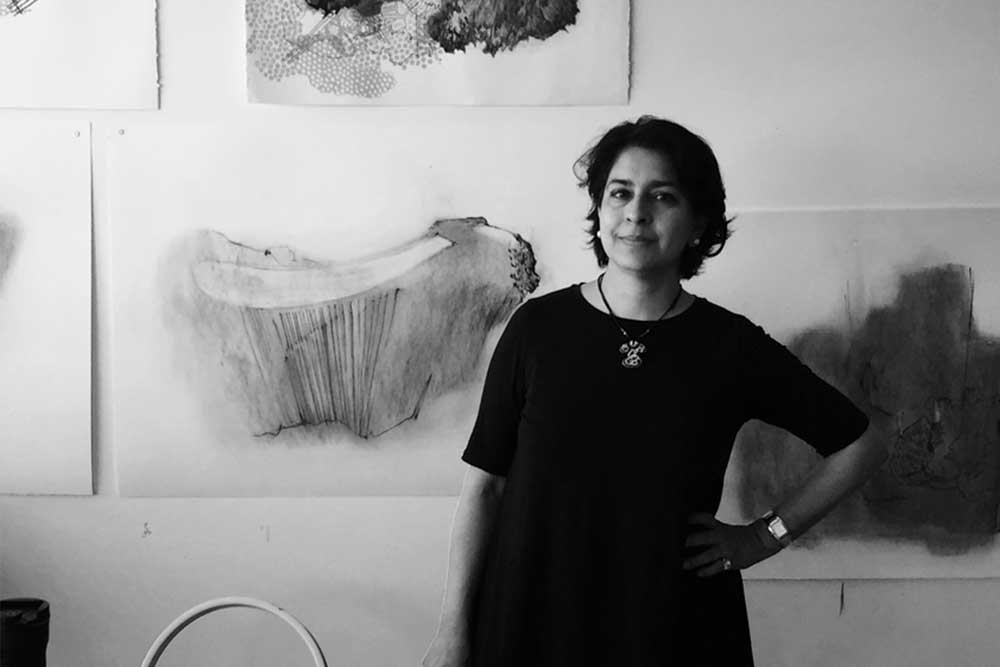 THE DESIRE TO experiment with materials and reclaim the earth, the need to travel across borders, metaphoric and actual—these are some of the concerns that viewers may encounter at the exhibition Regarding Embodiment mounted by artists Naiza Khan and Manisha Parekh. London-based Pakistani artist Khan and Delhi-based Parekh have come together for an exhibition that investigates form, materiality and shifting geographies.

While Parekh (born in 1964) has always been intrigued by materials and form, Khan (born in1968) is fascinated by derelict structures. Parekh is inspired by earth-bound fabrics like jute, handmade Japanese rice-paper, or indigo-ink and graphite. Khan’s inspiration is ageing concrete and the layering of histories over it. One may argue that both artists chase the materiality of objects that are often metaphors for their socio-political locales. Parekh’s India faces off against Khan’s Pakistan in a manner that is neither aggressive nor confrontational; rather, there is a gentle merging of the two concerns.

Besides being Pakistani, Khan is also a diaspora artist (she lives in London), which means she engages with multiple locations in her work. “The geographical specificity of the structures/ruins is important for me, as well as the nature of the public space that surrounds such sites. So, I have witnessed the erasure of these structures over several years, and the social space around them,” says Khan.

The works are often in Karachi, but reference global phenomena. “I feel when these images travel to Delhi or Bogota, they have a mobility beyond their specificity, as images that talk about urbanity,” she says underlining how the works are linked to political and social realities that are immediately apparent to present day experience. The works also challenge the notion of the present, by the resurfacing of past realities. Many of Khan’s drawings, like ‘Temple Under Construction’ and ‘Spill’ are characterised by an overlaying of forms, and a profusion of lines. Consequently, the contours of the building or the landscapes and playful cartographic maps are never clearly defined. “I have encountered multiple embedded histories and time frames while working on these. Images and objects have travelled back and forth,” says Khan. Her works evoke ideas of debris and dust storms, atmospheric climate, and the breaching of borders as current concerns.

Talking about the metaphor behind the buildings in her work, Khan says, “I feel on one level these images enable me to rethink and imagine urban space through a subjective experience. Walking through the landscape has been one of the sources of gaining insights into a place and people, it is one of the essential ingredients that has informed the emotional content of my work.”

While Parekh has always been intrigued by materials and form, Khan is fascinated by derelict structures

Parekh’s works are obscurely political, because both jute and indigo are materials that have been exploited by the ‘coloniser’. She reclaims them in a playful and evocative way by twisting the jute into biomorphic forms, or by painting clouds with an indigo tinge to them. The works also engage with the larger universe through these forms, since they often resemble the cells that make the human body. These biomorphic forms evoke a wider set of references, from gene therapy to nanotechnology and microbial metabolism. The work titled ‘Dip/Seep/Edge’ features the jute objects mounted against an arresting yellow and white wall, which calls attention to the work and gives it a larger than life dimension. It is wedged in the corner of two walls that it spans across.

“Everything about this work is intentional, from the way I have coloured the jute forms, by dipping them in paint and giving them those uneven edges, to the yellow and white wall that it is mounted against,” says Parekh. She began working on these forms after a site-specific installation, in 2001, where she had worked with jute. “I began playing with the jute and these forms emerged,” she recalls.

Other works by Parekh showcased at the exhibition are a series of small format works on paper, which evoke the ‘indigo cloud’. The strong strokes and the black, blue and rust colours add a certain melancholy to the works, as if these dark clouds stand witness to something ominous. On the other side of the gallery are works that appear more celebratory with their gold background and festive paper beads that dot the surface. Drawings in charcoal on paper, Curls of Mist and Breathing Mountain evoke the ephemeral beauty and playfulness of mist, capturing their magical and spirited nature.

Both the artists have grown and changed over the 20-odd years of their artistic journey. For Parekh, who had to outgrow the shadows of her artist-parents Manu and Madhavi Parekh, it has been the engagement with different materials that has changed over the years. The change in materials has often given birth to new forms. “It is often a serendipitous discovery, I usually do not go looking for it, but it comes to be while working on other projects, often something new will emerge at the end of it,” says Parekh.

For Khan, there has been a dramatic shift in her practice. She went from addressing issues of gender to looking at the larger socio-political histories of countries. Over time the two issues have come together. “In the current body of work, I see the aspect of walking through the city /landscape almost as a performative act. So, there is a reliance on the body to archive and recount narratives of certain spaces. I see it as a gesture of reclaiming public space, as a woman,” she says.

In both their works, femininity is buried under their choice of artistic expression, their approach to materials and their socio-political concerns. Naturally they have navigated their social space as women and that gives rise to a certain approach to their practice.

Irrespective of their gender, the artists have presented a world where the viewer is taken on a meditative journey, where one can peel away the layers that each artist’s work presents us with. One can enjoy the works on a purely aesthetic level as well, since the works are open to numerous interpretations.

(Regarding Embodiment by Naiza Khan and Manisha Parekh will run till December 17th at Nature Morte, Delhi)