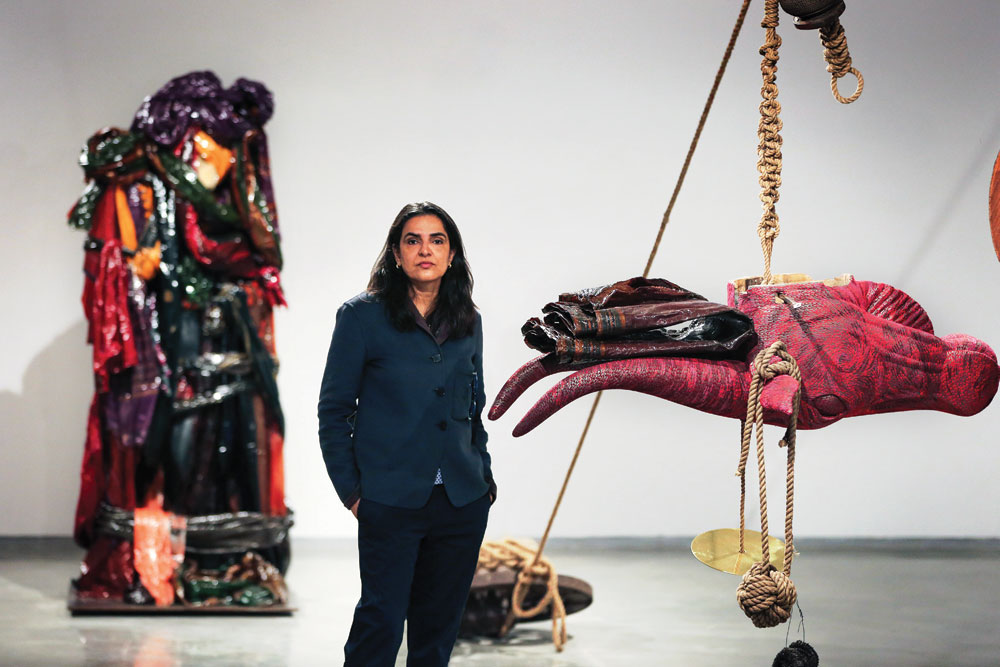 
The prospect of interviewing Bharti Kher can be daunting. Over the last three decades, Kher’s work has travelled the world from her studio in Delhi to Tokyo to Germany to Canada to Australia. Born in London, in 1969, and educated in the United Kingdom, she is arguably one of India’s most recognisable contemporary artists. Her bindi on fibreglass on a prone elephant The Skin Speaks a Language Not Its Own, was described by Sotheby’s in 2006 as “the most iconic and most talked about work of art by a contemporary Indian artist and the masterpiece of the leading female artist of her generation.” Fifteen years later, while Kher might be weary of being identified with the elephant—that seems to have surrendered to the earth—her reputation has only grown and solidified.

On meeting Kher one’s preconceived notions crumble. She doesn’t ride a high horse of achievements. She succeeds at being both business-like and amicable. Her work arises from contemplation, but there is a lightness to her. She takes the work seriously, but not herself, as she is quick to slide into laughter and merriment. Spending time with her, one realises that she is partial to certain words; “alchemic” for example, which spritzes her dialogue. The word aptly sums up her practice, which is essentially about transformation. She takes one thing and makes it another. She breaks that which is intact, she fixes the broken, she combines seeming opposites, she finds balance in absurdities. Through it all there is an element of play to her work, where play implies openness and not disregard. Her work shows how she is open to experiments and possibilities, she is not going to stick to a path that has proved to be successful, instead she will go where her practice takes her.

When we meet, Kher is putting the finishing touches to her exhibition Strange Attractors running at The Dhan Mill, Delhi. Mounted with Nature Morte, at a warehouse-like gallery, the show in­cludes fewer than 10 works. This paucity allows each work to get its own space and light. When we sit down to talk we are in front of Cause and Effect, which brings together two of Kher’s favourite materials—bindis and mirrors. Kher, who has long spurned conventional ideas of ‘beauty’, doesn’t use the pristine flawless mirror, instead she prefers the broken mirror. From a distance, Cause and Effect looks like a sliver of a water­fall running through laterite soil. But on closer inspection one sees how the mirror has been cracked exposing silver veins. The surface is covered with a multitude of crimson bindis which together resemble a net­work of red blood corpuscles.

When Kher first started using the bindi it was rather accidental. Over the last two decades, she says that she has come to use the bindi as a “code, a text, a mem­brane and skin”. Enunciating in her clipped British accent, she adds that she uses the bindi, “To conceal things, to open them up, focus your eye towards a specific point on a sculpture, to lead you in. And the most interesting thing for me is it’s a language that I’ve developed for myself and my own practise, and nobody else has it. So, it’s mine. I can speak it now.”

Cause and Effect with its shattered mirrors and intricate bindi details show­cases Kher’s engagement with ideas of the self and inner consciousness. Listening to Kher can feel akin to attending an art history class with a professor who combines scholarship with whimsy. Her sentences are packed with information, while retaining a sense of fun. Decod­ing Cause and Effect, she delves into the history of mirrors and how the ability to see one’s reflection has altered how we see ourselves and our place in the world. The mirror was a vehicle for conscious­ness and realisation. She says, “The man becomes, or the woman becomes a conscious living being aware of their inner self,” adding, “I love the fact that a mirror used to be more expensive than a Rubens’ painting.” While the mirror was an object of luxury in the Middle Ages, the Industrial Revolution made it accessible to all. Once people could see their face and body, aesthetics changed, makeup changed, fashion changed. When Kher uses the mirror as her material, she brings all of this history into consideration. She also takes the mirror as material in a radi­cal direction by shattering it. Over genera­tions, the superstition is passed down that to break a mirror is to invite bad luck. She says, “For me it was like if I break them, this is in a way my karma. My act of punk. And I sort of had this thing where it gives me the freedom. And when you break something, you free it from itself. It is an act of defiance, but also broken mirrors are gorgeous, so to turn something that is considered to be not beautiful and show­ing that it actually is, is something that I do quite a lot. I work with opposites.”

Kher’s engagement with opposites is evident through the exhibition. She plays with both textures and figures, transforming their feel and appearance. She places the head of a cow on the body of a female sculpture. She takes the softness of sarees and solidifies it into a crispiness. She adds a horn to a neanderthal-like figure. 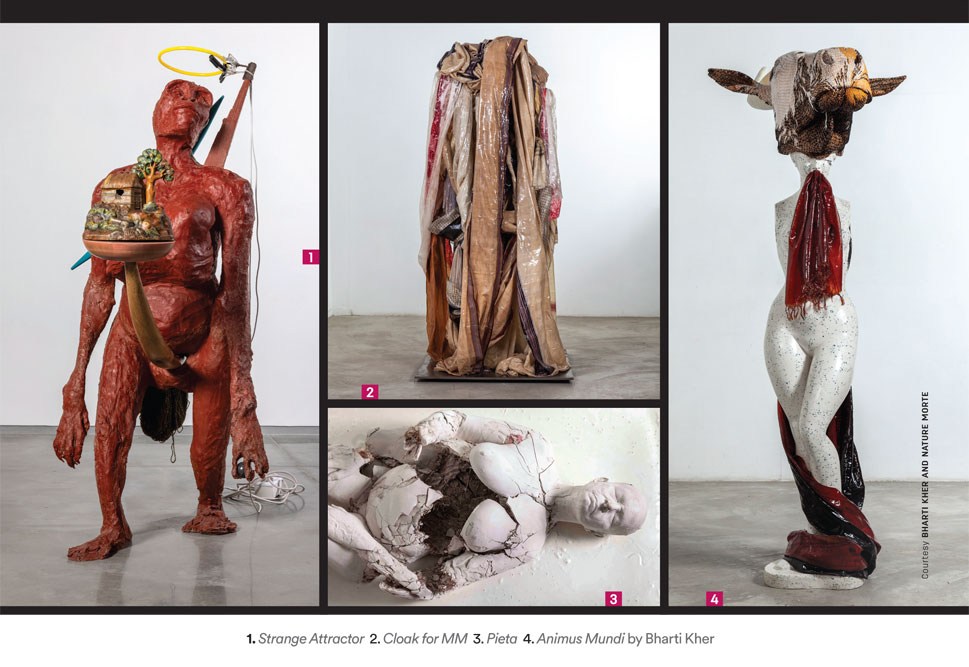 The female body, its ageing and its processes, has been Kher’s leitmotif through the decades. One of her most recognised works Six Women (2013–14), is a series of life-sized, sitting female sculptures. Kher cast sex workers paid by her. The six women sit with their hands on their knees, their lips pursed and eyes shut. Their torsos reveal the natural folds of flesh and breasts. The bodies arrest our gaze for their physicality and their vulnerability. At Strange Attractors we encounter Pieta (2018), which is a broken cast of plaster and wax that Kher made in the image of her mother. Kher says, “I’m trying to go inside her. I know my mother because I’ve lived inside her. But what would it be like to be inside the body? I did the outside casting to play with duality of inside and outside to see what happens inside the body. It’s my way of knowing something enough.”

If Kher is invested in the female form she is also inter­ested in the garments that drape the female body and hold the memory of that body. Two particularly arresting works at the show are Benazir (2021) and Cloak for MM (2018), both made from sarees, resin and metal. The statuesque sculptures were in­spired by former Prime Minister of Pakistan Benazir Bhutto and sculptor Mrinalini Mukherjee. Cloak for MM, made entirely from Mukherjee’s own handloom sarees evokes Mukherjee’s own sculptural work —often made from hemp fibres and jute—in particular Yogini.

“If I break a mirror, this is my act of punk. When you break something, you free it from itself. Broken mirrors are gorgeous. So to turn something that is considered to be not beautiful and showing that it actually is, is something that I do quite a lot,” says Bharti Kher, artist

The saree works, once again, showcase Kher’s ability to transform materials and to personify characters. She has been working with the saree for many years now, starting with wall pieces and then saree portraits. She says, “The saree women came out of this idea of absence and presence of the body.” The first works, she recounts, were made over chairs, then they became the portraits and the pillars, then they became the wall pieces and then they started adding accruements to various other figures. She now uses the saree “almost like pigment, like paint.” For Kher the ability to take a material and to reimagine it is crucial to her work. The sarees at Strange Attractors are no longer soft and yielding, instead they are solid, almost glass-like. Just as the bindis are no longer just a ‘third eye’, instead they are an entire language and vocabulary unto their own. Speaking about sarees (like many Indian women) she becomes especially animated, detailing how all Indian women revel in the ownership of sarees. She talks about the legacy and craftsmanship of the garment, how they are passed from mother to daughter down generations and how each region has its own weav­ing traditions. Born and brought up in UK, and having moved to India in 1992, Kher says, “For me, the saree works are quintessentially about India and my time here. And also, what can the saree do? They’re about how do you bring everything together to talk about the body. So the body can be the Shaman Body, the body is the Obscured Body, the Covered Body the Hiding Body.”

While Cloak for MM is a homage to Mukherjee, Benazir tells of the life and assassination of the Pakistani leader. Bhutto perhaps never even wore sarees but as Kher asserts that hardly matters. The Benazir sculpture has five holes in the body which tell of her violent end. Kher says, “The saree weaves in and out of her body, and they tell the story of her ins and outs and her comings and her goings, her needs, her desires, frustra­tions. Sarees tell the stories of our lives.”

While creating the saree works, Kher was desperate to source a few Jayalalithaa sarees. She reached out to every source she knew asking for merely 10 sarees. But that wish has remained unfulfilled.

The show is named Strange Attractors after a math concept that means “an equation or fractal set repre­senting a complex pattern of behaviour in a chaotic system.” It is an apt name for an exhibition that reminds one of stillness in chaos and harmony created through seeming opposites, evident in the work A Natural Unity of Opposites (2021) which is a complex installation of weights and balances.

A wonderful example of Kher’s creation made of weights and balances, triangles and ropes was on show at the Kochi-Muziris Biennale 2014, titled Three Decimal Points. Of a Minute. Of a Second. Of a Degree made from wood, metal, granite and rope. While talking about A Natural Unity of Opposites, Kher repeatedly uses the word “excited”. She enjoys the exacting process of finding and arranging objects and counterbalances. “It looks sort of really easy,” she says, “But they take ages to make because we just keep going until we reach a state of equilibrium.”

In the work and words of Kher one quickly realises just how much she enjoys the process and practice of creating art in the studio. And it is in that enjoyment that wondrous transformations occur.