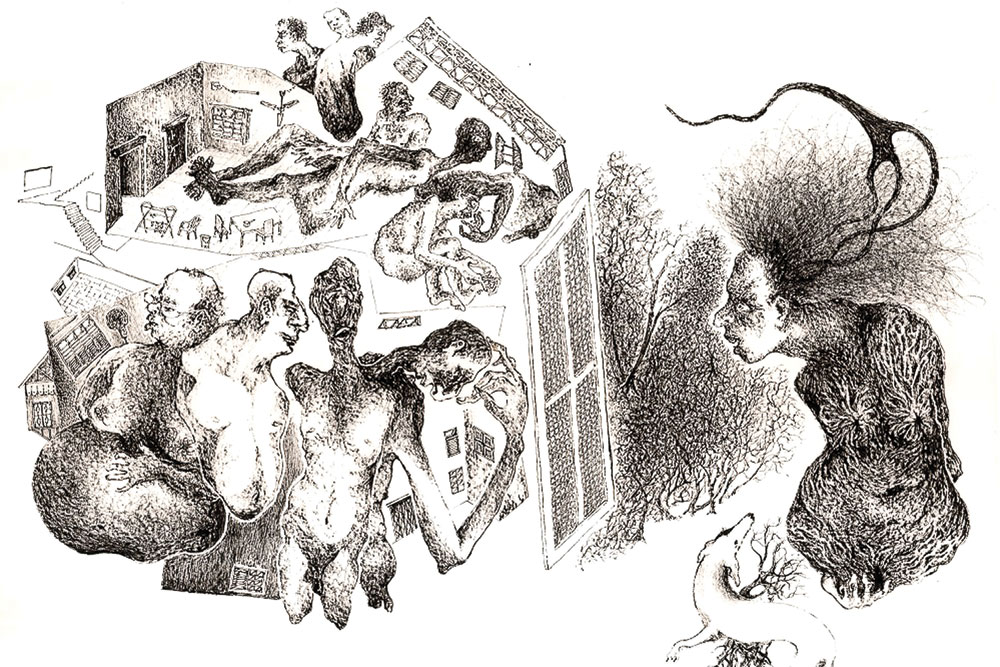 An untitled drawing by Parmita Mukherjee


SPEAKING ABOUT HER BOOK, Glitch Feminism: A Manifesto, curator Legacy Russell reminds us about the different existing versions of ‘body’. “When someone says to you ‘body’, what comes to mind?” she rhetorically asks critic Ben Davis during his interview with her. “So many people bring very real and devastating bias into shaping this ‘body’ and shaping how it should work, who it should serve,” she says. These articulations served as a promising gateway through which to access Seeds Are Being Sown, curated by Shaunak Mahbubani (they/them), at Shrine Empire Gallery, Delhi. Russell reminds us that the violence that inflects our present, especially in connection to Black lives and trans lives, connects, quite literally to the notion of who does and does not fit, and who is and is not defined or read as human. “Those decisions are actually a determining factor for making decisions about who has the right to live,” she says, thus raising the question of who is and is not visible. Russell would like us to recognise that the term ‘body’ is entangled with a discussion of what is and is not ‘human’, which is itself gendered and racialised, noting that, too often, it is Black bodies, femme bodies, queer bodies that are rendered invisible.

Mahbubani’s show is poised within the threat of the continuing erasure of non-white, non-heteronormative subjectivities and lives through the intersecting forces of capitalism, racism and patriarchy. Mahbubani writes, ‘As the colonial project continues to veer its head through neo-liberalism and sectarian politics, the scars of violence and repression get passed down family trees without space or time for healing. These intergenerational fault lines have been continually entrenched by political actors, bringing us to a point when these memories have sedimented into the stones that are being used to build the tower walls of upper-caste majoritarianism.’ Mahbubani ‘seeds’ the exhibition within this ravaged terrain ‘between body and belonging, faith and free will’, connecting the artistic labour performed by feminist, femme, queer and trans bodies across India, Afghanistan, Brazil, Colombia, Albania and Germany.


The exhibition is the result of Mahbubani being awarded the Prameya Art Foundation’s Art Scribes Award 2018-2019, though it is crouched within their self-initiated ‘open-ended’ series, Allies for the Uncertain Futures, initiated in 2016. The previous two iterations, Towards Resistance and Saavdhaan: The Regimes of Truth, were mounted at TIFA, Pune in May 2017 and Kalakar Theatre, Delhi in October 2018. ‘With this exhibition I start the act of turning, looking at antidotes to current anxieties through an organic metaphor,’ they tell Open in an email, anticipating that the next offering will likely probe the nuances of the ecological.

When I encounter the term ‘digital dualism’ that Russell plays with, I am drawn to its possible use as a tool by which to navigate the strangeness of art spectatorship in a pandemic-altered world, where the boundaries between the real and the virtual are dissipating even more eerily than when she proposed the term, in her 2012 essay, ‘Digital Dualism And the Glitch Manifesto’. In her just released book, she apparently prefers the term AFK (Away from Keyboard) instead of IRL (In Real Life). I type an email to Mahbubani from my work table in Italy. They graciously acquiesce to my request for a digital walk through. I receive a Google drive link. I click it and Mahbubani appears on my screen. They are alone, in the white-cube, talking to an absent-present me about their curatorial methodology.

Soon enough, Shrine Empire Gallery’s viewing room goes live, allowing me to move closer to the artworks, affording me the luxury of a virtual experience that is by no means glitch-less. The page often takes time to load, or my immediate impression of the work’s materiality is interrupted by my having to enlarge the image, or I find a certain video is not available for viewing online. I must therefore consult the Google drive link Mahbubani had sent me before. Yet, I derive immense pleasure in the non-immediacy of my struggle for access. ‘The glitch is the digital orgasm, where the machine takes a sigh, a shudder, and with a jerk, spasms,’ Russell had written in her essay.

Like Russell’s theory, Mahbubani’s show derives its current from being positioned within the liminal field of desire; from the radicality of coveting that which has been historically denied to the vocalising of suffering without the apologia of victimhood. Seeds Are Being Sown platforms the subjectivities of glitched bodies; those typically relegated to the margins of mainstream discourse, or rendered invisible, erased, or disembodied, dis-enfranchised, those that have had to suffer the tyranny of not being spoken to and not being heard, those that defy the constructed ideal of the ‘national’ or the socially desirable body. Mahbubani contextualises for us a selection of such subversive artistic practices, daring us to question who gets to speak, whose speech becomes audible, to whom, and why; and how to decipher what is made inaudible through the violence of heteronormativity, patriarchy and state-sponsored censorship. In doing so, Mahbubani asserts the pivotal potential of the curator as someone inhabiting the power to render audible the politics of dissent.

BRAZILIAN URBAN anthropologist and performer, Pêdra Costa (they/she) configures decolonisation as ‘a verb inscribed in bodies, tongues, and orifices as portals’. Their video, De-colon-ization VI, queers the term, suggesting its profane link with the body’s ‘colon’ as well as its syntactical connotations as a punctuation mark. In hovering over the trans body’s topography, the camera re-appropriates it from the colonising gaze responsible for its aesthetic othering. The performative video’s disturbing profundity is amplified in the polyphonous voice-over text, ‘The Southern Butthole Manifesto’, which calls for an expurgation of colonialist discourse and positions crouched within its exploitative ideological framework. It is read in a range of languages, sometimes one superimposed upon the other, beginning with the soundtrack of the ‘dial-up’ internet connection. ‘We are always collective, never individual,’ the text says. ‘Our knowledge would never be recognised if they were not appropriated by white and/or Europeanised knowledge and bodies. Our voices are not audible. Thus, we have all the autonomy and authority to found such studies. Try as we might, we will never be authorised as a field of knowledge by whiteness. We do not need its approval!’ It’s a fitting, anti-colonial way of undoing the horrors of such ‘civilising’ philosophies as propagated under the racist guise of Enlightenment. Costa dares to imagine a future as one which is not centered on the mainstream becoming more inclusive of marginalised voices, but rather involves a complete dismantling of the prevailing white-male/caste-ridden narratives.

Similarly, Rupali Patil conjures the potency of the finger as a bodily appendage capable of demanding accountability. Her mixed-media collage on cutting board pays tribute to the Sudanese activist Alaa Salah, who played an instrumental role in fuelling the revolution that ousted President Omar al-Bashir from 30 years of authoritarian rule. The image of her by Lana Haroun leading a crowd of protesters in a chant became iconic in April 2019. However, expectedly, six months later, in an interview with Time, she spoke candidly about how women were being excluded from the attempts to form a democratic government. Hers is a familiar narrative. Womxn’s bodies often perform the labour of dissent only to be rewarded with marginalisation when the desired outcome has materialised. Patil reminds us of the role of womxn on the front lines of historical battles against fascist, authoritarian governments.

The contribution by the anonymous Kabul-based artist who goes by the name Falani reveals her complex navigation of artistic agency as a street artist in a region where access to public space is extremely gendered. We see her pink Dadaist graffiti framed in the background as she poses against it in a flowing black burkha. Falani seems to take refuge in the anonymity that the gendered garment affords and reclaims war-torn territory by tagging it with her assumed name. In the show is her documentation of her work which travels and situates itself as piquantly in Delhi, where many Muslim women have, in the last year, performed innumerable acts of activist and artistic labour that will be known only to them.

THE TONGUE AS a bodily weapon is evoked in a remarkable watercolour painting by Khushbu Patel in which the muscular organ is rendered topographically, performing as imaginative landscape full of utopic possibility; while the Blood Book series by Arshi Irshad Ahmadzai claims the bodily ritual of menstruation, tapping into it as a window for dramatic creativity. All the works in the series are done by her during her menstrual cycle, defiantly exercising her agency to allow for art to emerge from this state of body, and announcing the alternative nature of such an organic subjectivity. Aqui Thami re-presents disappeared bodies, reinstituting them within public discourse and archives through the Gorkhaland Picture Archive, a collection of images from newspaper archives recounting the indigenous movement for autonomy for Gorkhaland and by using the gallery as a site for commemoration. Every day of the exhibition, Thami instructs the gallery to add a new name to a wall of missing protestors and activists in the Gorkhaland struggle. Daily, the ceremonial herb-mixture, tite-pati is burned in memory of the rituals of people fighting for their right to live on their ancestral land.

Shaunak Mahbubani’s show is poised within the threat of the erasure of non-white, non-heteronormative subjectivities and lives through the intersecting forces of capitalism, racism and patriarchy

Even nails are not spared from conveying political resistance. Mahbubani includes N*A*I*L*S hacks facts fictions in the exhibition, a collective Berlin-based publication that brings together stories of migration while examining the labour that supports the beauty industry and is in turn exploited by it. ‘Nails, the corneous membrane between a self and others. The ‘interface’ between the inner—blemished, mogul nails as a sign of a deficit or an illness in a body, bitten nails or smooth healthy nails—and the outside. A surface, a projection screen for both,’ reads the introductory ‘Nailstories’ by Katja Kobolt.

Seeds Are Being Sown revels in reminding us that even the act of hoping is a form of labour performed by non-mainstream bodies that must constantly play killjoy to mainland narratives. Two text-based pieces, an Urdu poem by Sabika Abbas Naqvi and a letter from Sabina Yasmin Rehman, an indigenous Muslim from Assam, dwell on what it means to inhabit an othered body and subjectivity in a nation that is on the verge of declaring for itself a homogenous identity.

Between their interventions and Parmita Mukherjee’s fabulist landscapes, it’s possible to find comfort in the task of imagining futurity. The viewer is entrusted with the responsibility of radically listening to both the spoken and the inaudible, the visible and the yet-to-be-imagined, thus performing as ally and witness, thus investing in the call to dream together, as a collective.