Where the familiar becomes fabulous 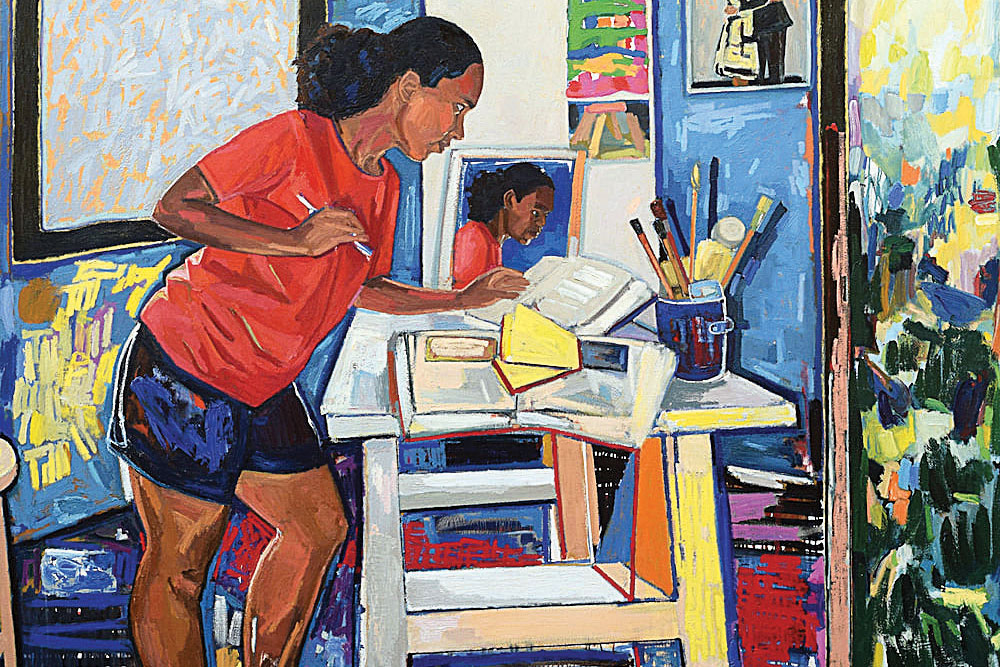 
The 12th edition of the India Art Fair (IAF) returns to the NSIC grounds in Delhi, offering emerging and established collectors a safe space to buy art from at least 75 South Asian and international galleries. IAF 2020 prides itself on ‘positioning artists at its core’, though we’re not quite sure how exactly, especially within the ambit of what continues to be a commercial event, which has tried to nurture an overarching curatorial dimension. Perhaps certain new initiatives, like the artist-in-residence programme wherein six artists and a collective have been invited to conduct workshops for enlisted participants, is evidence of the promised shift. Whether it is or not, it will help demystify for the public the aura that shrouds the art making enterprise.

Paper aficionado Manisha Parekh, for instance, will share her knowledge of making art from waste paper, while New Yorker Ghiora Aharoni will instruct his audience in methods of collaborative, cross-cultural collage making and Gagan Singh will impart his self-accumulated wisdom about cartooning.

Accessibility does seem key for many such planned interventions. The facade of the main exhibition halls will be covered by a canvas upon which Sameer Kulavoor will have painted instances and scenes from the everyday life of everyday people, alerting us to moments of aesthetic splendour that can go unnoticed because we haven’t been trained to look at them as artful. From the geometry of baskets piled one upon the other to mattresses stacked such that they form a wall, human figures are positioned harmoniously in relation to objects in Kulavoor’s work. One imagines that seeing visual depictions of familiar objects could make contemporary art feel less elitist and alienating to visitors who may not necessarily be ‘from’ the art world.


Even the outdoor projects seem relatable and readable and don’t seem to require reams of explanatory text. There’s definitely an immediacy to Anita Dube’s revived 1994 metal sculpture inspired by Charles Baudelaire’s Les Fleurs du Mal (The Flowers of Evil), resembling a cyborg-like being, a reflection of her concern with personal and societal loss in a technocratic age. One can imagine audiences lining up to experience Farah Mulla’s immersive Crosstalk, which determinedly explores the intersections between audience, space, sound, and colour vibrations. But the sure-shot hit, because of the simplicity of its medium, its site-specificity, and its potential for implicating visitors within its frame, will be Martin Parr’s Live Photography Project, 2020. At his booth in the Fair, we can look forward to first-hand access into the Magnum photographer’s haughty eye that delights in zooming in on aesthetic contradictions among aspects of the every day as it captures, on his camera, both people and exhibits, or perhaps people in relation to exhibits. Attending IAF might thus land you a prime spot as a subject in one of the famed photographer’s photographs. How is one to resist the chance to inadvertently be the subject of an artwork?

While it’s possible to spot a photographer in action, doing his thing, audiences are also guaranteed prime access to provocative performance art. We’re particularly keen on Maya Krishna Rao’s promised Loose Woman, directed and performed by the national award-winning theatre artist and social activist. Slated for January 31, the 45-minute long performance will offer absorptive glimpses into the life of a woman ‘who finds herself in situations that push, pull and stretch her skin, as it were’. Her looseness is also conjured, coaxed and driven by the mediums of theatre, sound, and camera. From everything we’ve experienced of Rao, this one sounds as riveting and presenced as her other work. Over four hours, Nigerian multimedia artist, Jelili Atiku will perform Nobody is Born Wise, which will also function as an installation art piece wherein Atiku will invite audiences to participate in a ritual of colouring sacred sculptural objects in turmeric, a tradition not uncommon to Indian culinary and socio-religious practices.

Within the conventional fair display, we urge you to look for brilliant work by Mequitta Ahuja, who claims a South Asian and African American descent. Ahuja plays with self-portraiture as a way of engaging with her identity.

Beyond the main exhibition booths you’ll find the Focus section composed of seven galleries highlighting various modes of artistic practice. We are keen to explore Galerie Mirchandani + Steinruecke’s display of oil-on-canvas paintings by Trivandrum-based Ratheesh T whose muse remains his home state of Kerala, with scenes drawing from his encounters with vernacular vocabularies.

Within the ‘Platform’ element which will expose visitors to South Asian galleries, collectives, and projects, we’re most excited about the ever-evolving Kathmandu-based Nepal Picture Library, a digital photo archive run by photography platform, photo.circle which, since its inception in 2011, has collected over 70,000 photographs from private and organisation-based sources, making it a repository for Nepali history.

Another welcome addition to this year’s edition which we hope will become an integral element is the official IAF Bookshop and Cafe. This space will also double up as the learning space where artists will conduct workshops. Look out for a selection of zines published by Bombay Underground, founded by Aqui Thami and Himanshu S who also operate the Dharavi Art Room and run the Bombay Zine Fest.

THIS YEAR ARTISTS are also at the core of the talks programme that take place at the auditorium at the Fair. Amar Kanwar and Kathmandu-based NayanTara Gurung Kakshapati will discuss ways of showing art and creating spaces for audience engagement in a South Asian context especially amid mitigating factors, such as limited infrastructure, political constraints and increasing censorship. Turner prize-nominated Bangladeshi artist Naeem Mohaiemen and Indian artist, Pallavi Paul will elaborate on the proposition ‘When Artists Say ‘We’’, a talk that might discuss collectivity among cultural workers as a viable counter to a hyper-capitalist art market. Whether the talk will embrace mention of movements like #MeToo, the weaponising of defamation suits to silence those who speak up against sexual abuse in the art world, and/or the recent attempts at unionising is, justifiably, a matter of some suspense.

Beyond the Fair, too, artists are poised at the centre of some significant exhibitions. Three among these, at the Kiran Nadar Museum of Art, Saket, curated by Roobina Karode, should be mandatory for all visiting art lovers because they illustrate the massive aesthetic accomplishments by female Indian contemporary artists. These include Zarina: A Life in Nine Lines, which brings together works by Ayesha Sultana, Prabhavathi Meppayil, Lala Rukh and Sumakshi Singh; and the much awaited, Abstracting Nature, which has works by the late Mrinalini Mukherjee in dialogue with those by Jayshree Chakravarty. Also worth visiting is Remen Chopra’s anticipated solo at 24, Jor Bagh, hosted by The Gujral Foundation, offering a glimpse into her wide-ranging practice that explores history, identity, belonging and self-transformation.

When you tire of all the artist-centrism, put your own needs first and head on down to the newly opened Pond Gallery in Delhi’s Safdarjung’s B Block market where you’ll find a safe space to nurse your inner rage. Thukral & Tagra, in collaboration with Pollinator, have conceived a touchingly simple show, Nafrat/Parvah whose premise is uncomplicated and democratic. Exchange your hate to receive an experience of care. Literally, take an object along that you absolutely despise, write a note explaining why, and pick a care item from the menu. Research will reveal that such an idea has been executed before, making it not as innovative as you would expect. Still, if a work of art can go beyond being object and translate directly into an experience of relative healing for an audience, in our books it’s a win.

(Visit indiaartfair.in for details. India Art Fair is open to the public from January 31 to February 2, Delhi)