A Passage to Unfreedom 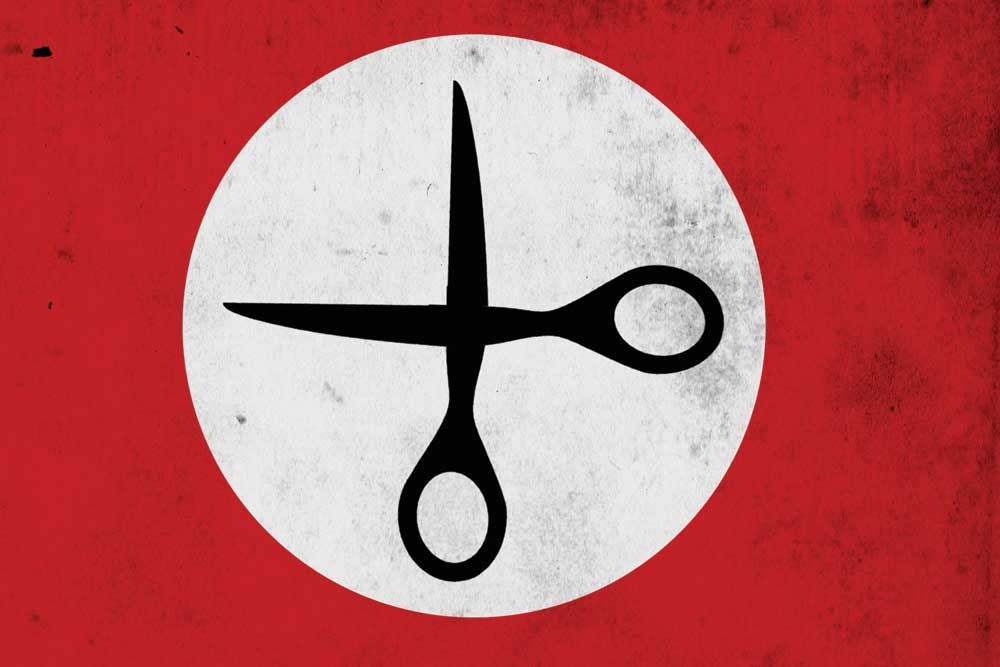 THE NATYA SHASTRA, India’s foremost treatise on aesthetics, describes the emergence of censorship immediately after the birth of drama. It comes at a time when the world is so disordered that the gods approach Brahma for a solution. The Vedas are all well and good, they tell him, but sacred scripture isn’t available to everyone. In response, Brahma produces the Natya Veda, a democratic form of knowledge to which even Shudras are permitted access. He tasks Bharata with simplifying this fifth Veda and putting it to use, but the director’s choice of inaugural play is injudicious. He stages the Amritmanthana, in the course of which the devas deceive and defeat their cousins the asuras, for an audience composed of both victors and vanquished. Watching themselves being clobbered, the daityas and danavas summon a mob of vighnas to paralyse the actors.

Indra steps in, scattering the malevolent spirits impeding the performance, but the matter ends up before Brahma. How can we endure an enactment of our humiliation, the asuras ask. Brahma instructs them to adopt a distanced view of art, drawing lessons from the action and being entertained instead of taking things personally. He explains that the world is full of stories, and some will be told from an asura point of view and others from opposing ones, but all offer some form of edification. He also issues instructions on how playhouses will be guarded by gods in the future, a necessary provision since it’s unclear if his argument in favour of free expression has convinced the asuras.

When the people of India gave themselves a constitution on 26 January, 1950, it protected free speech as robustly as Brahma defended the playhouse. The guillotine was to descend a mere 18 months into the new Constitution’s reign with the passing of the first amendment and the introduction of a slew of statist restrictions. Article 19 (1) (a) of the original text had guaranteed all Indian citizens the right to freedom of speech and expression. Article 19 (2), altered through the first amendment, substantially undercut that right in stating, ‘Nothing in sub clause (a) of clause ( 1 ) shall affect the operation of any existing law, or prevent the State from making any law, in so far as such law imposes reasonable restrictions on the exercise of the right conferred by the said sub clause in the interests of the sovereignty and integrity of India, the security of the State, friendly relations with foreign States, public order, decency or morality or in relation to contempt of court, defamation or incitement to an offence.’

India’s asuras, including those in the police, bureaucracy and political apparatus, having been gifted a weapon with which to stifle creativity and truth-telling, no longer needed invisible vighnas to do the job for them. Almost anything could be construed as affecting the security of the state, threatening public order or contravening decency. Films, books, plays, and art exhibitions became frequent targets of group ire as identity politics tightened its grip on regional and national politics. Even a Tibetan flag being waved at a concert, as one was in Imtiaz Ali’s film Rockstar, could harm friendly relations with foreign states. If we were prohibited from showing a Tibetan flag for a few seconds as part of a crowded background, what were we permitted to show?

When the matter ends up before Brahma, he says that the world is full of stories, and some will be told from an asura point of view and others from opposing ones, but all offer some form of edification

Perhaps the muzzling of expression was inevitable in a newly independent nation whose stability appeared predicated upon a mutual respect between communities more substantive than the neutral tolerance of different faiths, denominations, and ideologies practised in affluent democracies. If the trajectory of India’s freedom struggle prevented artists from exploring divisive public issues, the nation’s traditional conservatism, which had endured side by side with erotic sculptures and treatises on sex, was a barrier to depicting private intimacy of any sort. When Dadasaheb Phalke failed to convince any women to act in his path-breaking first feature Raja Harishchandra, it was clear that the new medium of cinema was not considered a respectable art, and would be accepted only grudgingly by the establishment. Brahma had conjured apsaras to play female roles when drama was invented, but Phalke could not convince even prostitutes to stand before his camera in 1913. The status of films had barely changed four decades later, when BV Keskar, Minister for Information and Broad casting in Jawaharlal Nehru’s Cabinet, radically reduced the time allotted to popular music on the state-controlled monopoly broadcaster. He considered movie tunes vulgar and wanted the public to appreciate classical music instead. Keskar disallowed the naming of the films whose songs were played on radio, which led to a boycott by the film producers’ guild and made Radio Ceylon the premier channel for Indian film music in the mid 1950s. The story provides an antidote to nostalgists who would have us believe independent India was once progressive. The dominant form of narrow mindedness may have varied over time, but our minds were never broad.

In recent years, conservatives have condemned popular cinema as a driver of crimes against women, an argument made repeatedly in the wake of the brutal assault on Jyoti Singh in December 2012, which put rape in the forefront of national political debate. Those who pointed an accusing finger at cinema provided no proof that watching women dressed in revealing clothes on screen caused men to assault them in real life. No such evidence exists, but the distressing issue of rape allows reactionaries to make an intuitively plausible case against depictions they despise for reasons that have nothing to do with women’s rights. It’s another matter that a generation has grown to adulthood watching online pornography, compared to which anything on the Indian screen is absurdly tame.

India’s obscenity law, laid out in clause 292 of the Penal Code, allows exceptions to the ‘deprave and corrupt’ principle, provided the object of the complaint serves some public good, a bona fide religious purpose, or is an ancient monument. It is unclear how an artefact or book can deprave and corrupt while also serving the public good. Surely, if an artwork carries the potential to deprave individuals who view it, that should supersede any religious or artistic arguments in its favour. Besides, how should we quantify artistic merit, which is said to serve the public good? Those who agitated for a ban on Salman Rushdie’s Satanic Verses, or wanted MF Husain imprisoned for painting Saraswati and Bharat Mata, absolutely rejected the idea that these works possessed any aesthetic value.

In the 1970s, the British government set up a committee on film censorship headed by the eminent philosopher Bernard Williams which tackled these issues head on. The committee recommended that ambiguous phrases like, ‘tendency to deprave and corrupt’, ‘public good’ and ‘artistic merit’ should be replaced by the more empirically verifiable criterion of demonstrable harm. Secondly, it suggested ‘immediate involuntary offensiveness’ as a test of whether something should be prohibited. The report said that material in the public domain such as billboards, shop windows, and magazine covers ought to be guided by notions of public acceptability, since viewing such imagery does not involve individual choice, and can therefore create immediate involuntary offence. On the other hand, buying a book in a shop involves a series of conscious decisions, and should therefore enjoy the maximum degree of freedom.

In keeping with the tenor of the Williams report, censorship in liberal democracies has shifted from policing the entire terrain of representation to policing boundaries. Nations have evolved a complex map of borders between free to air channels and pay channels, pre and post watershed hours, and grades of certification. If Janet Jackson’s ‘wardrobe malfunction’ during her performance at the Super Bowl final caused an uproar, it was because it happened during a telecast watched by millions of American children, and gave immediate involuntary offence to family audiences. On a different channel at a different hour, far more graphic material would pass without comment.

In India, as in most unfree lands, the entire terrain of representation remains contested. It does not matter if material is accessible only to adults who have jumped through a series of consent hoops: if one group has deemed it offensive, nobody is permitted to view it. The idea of choice doesn’t come into the picture, for the very existence of such material is considered intolerable.

The terrain, though, has expanded enormously with the growth of the World Wide Web. Only extraordinarily determined and overtly authoritarian regimes such as China’s can create effective firewalls against the flood of cyber content, and it is unclear how long even they can hold out. India’s sanitisation regime stops little of the hate speech and inflammatory calls to violence so freely spewed online, while choking the output of our theatre, cinema and visual art. It targets what is best in our culture while permitting the worst free reign. When some objectionable material on the internet is brought to its notice, the state reacts by shutting down entire channels of communication, which is like uprooting a vast garden along with a few weeds. The complexity of transnational web-based propaganda is entirely beyond our capacity to police or deter, and our response to it is ad hoc, arbitrary, and unsystematic.

As the anger and reach of the anonymous web burgeons, restrictions on responsible, identifiable Indians working in traditional media seem increasingly pointless from a practical standpoint. And yet, there will be no change in status, no loosening of censorship in the foreseeable future. The battle over representation is primarily a symbolic one, and we cling to a symbolic idea of India the way the late Mughals clung to the fiction that they ruled the Subcontinent. The divide between what is permitted and what is actually consumed has become a gaping chasm, but there is no politically tenable way to bridge it in the absence of public support for genuinely free expression. Creative individuals determined not to bow to the censor are left with the same options James Joyce’s alter ego Stephen Dedalus outlined a century ago when he proclaimed, ‘I will not serve that in which I no longer believe, whether it calls itself my home, my fatherland, or my church: and I will try to express myself in some mode of life or art as freely as I can and as wholly as I can, using for my defense the only arms I allow myself to use—silence, exile, and cunning.’