“A jihad for the right to love who you want”

A Jihad For Love, a courageous documentary about homosexual Muslims, shot furtively by an Indian filmmaker, is sending shock waves around the globe. 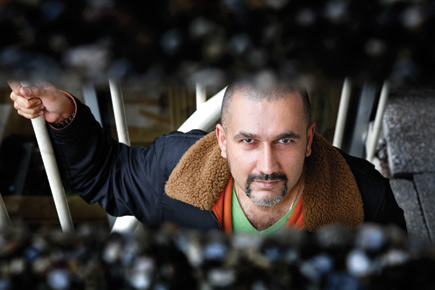 A Jihad For Love, a documentary about homosexual Muslims, by an Indian filmmaker, is sending shock waves around the globe.


Parvez Sharma, who is based in New York, is an improbable voice of Islam. He is a gay Muslim who doesn’t consider his faith compromised by his sexuality. He is a filmmaker who shoots his films from an ‘Islamic point of view’. His documentary film A Jihad for Love, on the homosexual struggle for acceptance in Islam, was shot in several countries, including India, Iran, Egypt, Pakistan, South Africa and France.

Most documentaries on Islam are either obsessed with terrorism or too busy bashing America to look within. A Jihad for Love provides a break by engaging with homosexual Muslims, trying to reconcile faith with sexuality. It begins with Muhsin Hendricks, an imam in South Africa coming out of the closet on radio, shocking the local community. His disclosure leads to his excommunication and strains his relationship with his school-going children. While driving them around, he asks his children, if he were sentenced to death, what would they do? One of them playfully answers she would pray the first stone kills him so he doesn’t suffer much. Muhsin tells her he would give his life to protect his children, but what about them? “I will save you daddy,” replies another daughter. She kisses her dad on the cheek as goes on repeating the line.

The director Parvez Sharma has succeeded in getting his subjects to be candid, to be courageous. To survive an ordeal of imprisonment, rape, lashings, illegal escapes and share it on camera, as some do, makes the film intensely intimate. A lesbian confesses that her hijab makes her unattractive to men, as much as it shows her faith. None of the subjects rejects the faith. This film is thus a critique from within.

Since its theatrical release in the US and Canada in 2008, the film has been screened in hundreds of film festivals and in informal screenings. It was recently screened in India. Excerpts from an interview with Parvez Sharma:

Q South Park got into trouble recently for depicting the Prophet inside a bear suit. As a Muslim filmmaker in New York, what do you make of it?

A South Park is an American institution. So when Islamic wingnuts from Queens decide to speak up against it, they get a lot of media attention. The media listens to radical voices instead of moderate ones because it suits their purpose. It promotes a radical, conservative interpretation of Islam. A good example of this is the global coverage the Iranian cleric who blamed earthquakes on promiscuous women got. As a result, both the wingnuts and South Park get free publicity. It’s a vicious cycle in which the ultimate losers are real Muslims who can attest much better to the Islam that they know about, or the Islam that A Jihad for Love talks about.

Q Is the media not interested in moderate Muslim voices because they are few and far in between?

A The whole discussion on Islam has a new ambassador, Osama bin Laden. But it’s not true. After 9/11, you’d be surprised by how many Muslims are engaged in an Islamic reformist movement. There are debates on women’s rights, for example. A lady in my documentary film says [Prophet] Muhammad was a feminist, and another one speaks of ijtihad or independent reasoning. But it’ll take some time for moderate Muslim voices to drown out attention seeking, prejudiced voices like the Iranian cleric’s.

Q You too had a fatwa issued against you along with a subject of your documentary, the South African imam Muhsin Hendricks, who announced his homosexuality on national radio.

A Yes, we were both declared apostates by the Muslim Judicial Council, the primary Muslim Council in South Africa. The fatwa was read out in several hundred mosques. Muhsin and I took this as an opportunity and actively sought Muslim media out. The fatwa (ended) up generating a positive response to the issue.

Q There is a thin line between generating controversy and constructive dialogue. Your film has succeeded in creating a space to discuss homosexuality in the context of Islam. What do you think helped you succeed?

A I shot this film with a Muslim camera. It doesn’t attack Islam… it is full of voices who speak for Islam, who need the faith to endure their struggle. This film has Muslim authorship.

Q Is it easier for traditional Islam to accept critical thought when it comes from within the community and uses a language it is comfortable in?

A This film is primarily about Islam, and homosexuality after that. The fact that I didn’t have blonde hair or stuck out definitely helped in my shooting the film. I call the shooting of this film ‘a digital jihad’, as I did it secretly. I pretended to be a tourist.

Q A cleric in your film says that there is no ambiguity in The Quran’s condemnation of homosexuality. The only ambiguity is about how the guilty ought to be killed. Does such a stance not deter you?

A I’m completely at peace with my sexuality and faith, coming from a mixed background. But I am more pessimistic than the film. In my lifetime, I don’t expect to see an affirmation from mainstream religion, but I do hope to see a change in public perception. Also, the Shia sect has a more nuanced approach to homosexuality than the Sunni, and this is evident in the interviews with the Sunni cleric in Cape Town and Shia cleric in Lucknow. While the Sunni cleric goes on about death penalty, the Shia cleric speaks of Allah’s forgiveness. He also perceives it as a psychological problem—and asks the homo-sexual man to see a doctor. But he doesn’t speak of capital punishment.

Q What is mainstream religion’s grouse against homosexuality?

A Heterosexual marriages are the cornerstone of all orthodox religions. Homosexuality challenges it. It goes against procreation.

Q That is true. The Moroccan writer in your documentary comments how his mother was more agitated by his views on marriage than his being gay.

A Yes, and I can understand that. It is my ability to see the other side [of the argument] that allowed me to make this film.

Q Your film is exceptionally mature in its treatment of both Islam and homosexuality. It must have been difficult, though, given that some of your subjects received lashings, were raped in jail and forced to flee overnight to other countries.

A I do carry the pain, but I left all my anger at the door of my editing room. I learnt from the people I interviewed that this is a jihad for love, not anger. The only way to create an honest discussion is by not attacking. The power of this film lies in its rejection of anger.

Q Some people in your film seemed to have reconciled their faith with their sexuality by differentiating between love and sex—same-sex intercourse is a sin, but love is universal.

A Yes. That guilt is at the heart of the struggle. We have grown up in traditional environments where there is no positive role model and nothing in the media or society to affirm your attraction. The idea of a heterosexual marriage is engraved into our psyche.