A Family Album of India 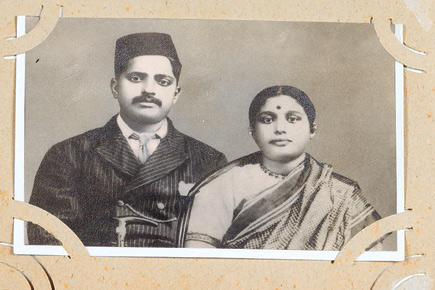 
Sepia-toned images that carry a whiff of rich brocades and yellowing parchment; portraits that stand as a testament to the noisy, yet comforting Great Indian Family; a vivid narrative that offers a glimpse into an era gone by—the Indian Memory Project offers you this and much more. What started as an online social experiment has now transformed into a full-fledged project aimed at tracing the personal history of India through family archives.

Conceptualised by Mumbai-based photographer Anusha Yadav, this project aims at reconstructing pieces of the past that are slowly slipping out of people’s memories.

“I have always been interested in old pictures and photo archiving. This is how I thought of the Indian Memory Project last year. I posted word of it on Twitter and Facebook and soon, quite a few people started writing in, expressing interest,” says Anusha.

As pictures came in, a narrative about families, cities, settlements and their culture began to take shape, bit by bit. She wrote to her friends and acquaintances asking for help in her endeavour to create an archive, like a pictorial history, passed through generations. She found to her amazement that personal pictures were actually far more interesting than professional portraits by hired photographers. The amateur ones spoke volumes about the subjects and their relationship with their surroundings. “In personal portraits one can find a great deal about the family—where they are, where they came from,” says Anusha.

The project is an extension of Anusha’s own style of photography, which she has christened Urban Documentary. She chooses to highlight the subject’s personality rather than merely creating picture perfect images. Each portrait is like a narrative with the potential to trigger a discourse and exchange of ideas. Through the Indian Memory Project as well, Anusha wishes to create a rich narrative history replete with drama and dialogue, not simply an inanimate archive of images. It is for this purpose that people are requested to add a small write-up along with the pictures they send. Photographs shot before the year 1990 are preferred along with details such as the place, year and information about the people in the picture.

Anusha has so far managed to collect 35-40 images and has uploaded them on the project’s blog. “When I get around 200 pictures, I shall move them to a dedicated portal, where cross-referencing will be easier,” she says. If you go to the blog, you will come across images that make you smile, perhaps even compel you to dust off your own fat family albums and rummage through them, hand in hand with grandparents and great.

“I have received images from people of all age groups and from different walks of life. There is this really interesting visual of a father and son sitting with a rifle between them. Through images like these, one can see how spaces have changed, relationships have changed and even how photography has changed,” says Anusha.

As one looks at set after set of photos, the subtle dynamics of the man-woman relationship become evident in the way they pose. “Their comfort level, their own self-confidence—all this is of anthropological value,” she adds.

The photographs don’t just highlight different cultures, but bring to fore unique personalities who might have been lying undiscovered for so long. For instance, Gitanjali Pare, a Shimla-based writer, discovered a hidden jewel nestled in her family albums. An image of CK Nayadu, who captained India in their first official Test match played in England in 1932. Nayudu was even invited by the Maharaja of Holkar to transform the royal team into a Ranji-winning side.

Then, there are some lovely images sent by Manorat Palan of his grandfather who joined Tata Steel Co Ltd in 1937 and worked there till his retirement in 1975. “There is also a photograph of his grandmother, Rohini Palan, which had clearly been taken for matchmaking purposes. There is this endearing innocence in the way she has posed—the promising confidence of a budding woman and the sweet shyness of a young girl,” says Anusha.

The energy and the stature of the project depend on the quantity and quality of pictures Yadav receives. “There are a lot of invaluable private collections that are not available for all to see. I wish to make this archive accessible to everyone. Maybe then, people will begin to find stories that are lurking behind everyday pictures,” says Anusha.

Contributions to Indian Memory Project can be made at indianmemoryproject@gmail.com