With Tabloids on His Side 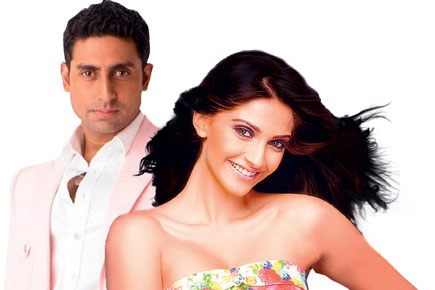 
Abhishek Bachchan doesn’t have the box-office clout of Aamir, Salman or Shah Rukh Khan, but he does have a Rs 70 crore film scheduled to release shortly. Abbas-Mustan’s Players is possibly the biggest film on Abhishek’s plate currently, and its success or failure is likely to determine whether the actor can be trusted to carry an action film on his shoulders after all.

Reportedly, one of the things he’s been advised to do in the weeks leading up to the film’s release is mend his ways with the media. Turns out the actor has been calling up journalists who he’s had strained relations with, and extending an olive branch. He even dropped in at a tabloid office last week to ‘say hello’ to the reporters.

The actor, who has rubbed more than a few hacks the wrong way with his cheeky behaviour over the years, has been explained the importance of good publicity, and the benefits of turning over a new leaf. His publicist has allegedly told friends she’s working towards whitewashing his image with the press, and the role model they’re apparently emulating is John Abraham, who doesn’t get slaughtered by the media despite delivering duds because he’s never had a combative relationship with tabloids.

The (Not So) Secret Boyfriend

It’s almost amusing how hard Sonam Kapoor and her I Hate Luv Storys director Punit Malhotra have to try to keep their relationship under wraps.

At the premiere of Mission Impossible: Ghost Protocol in Mumbai last week, Sonam walked the red carpet and made quite the stunning entry, while Punit reportedly snuck in separately, dressed casually in jeans and a simple white T-shirt. The plan, apparently, was to meet inside the cinema hall, away from prying cameras, to enjoy the film together. But when the red carpet schmoozing took way longer than expected, the screening itself was delayed by two hours. In no mood to wait by himself till Sonam finished posing for pictures with Tom Cruise and her father, Punit beat a hasty retreat from a side exit.

Just weeks ago, at a Bombay Times party in Mumbai, Sonam and Punit timed their entries in such a manner that one walked in literally moments after the other had left. Sadly, movie stars never account for their disgruntled staff, who’re only too happy to drop damaging gossip in the hands of the prying media.

Until now, producers have sworn by her professionalism and her sense of discipline. Regarded as one of the most hard-working leading ladies in the business, she’s also one of those rare A-listers who tirelessly promote their films for weeks before their release, a job most actors detest.

But if the Bollywood grapevine is to be believed, she’s changed. There are stories doing the rounds that the moment the actress arrives on set, her spot-boy will show up with a list of ‘must-haves’, which are presented to the unit production staff. The items usually requested include a kilo’s worth of different fruits, several bottles of mineral water, a lunch menu from an expensive restaurant nearby, and things like tissue-paper boxes and bottles of hand-sanitisers.

Movie stars are a famously miserly lot who will rarely pay for anything themselves. Producers are hardly surprised when they demand expensive lunches from five-star hotels, but in the case of this actress, they seem upset because she isn’t just ordering for herself, but also for her entourage of roughly a dozen people.

While the staff employed by other stars will eat at the unit lunch spread out daily, this actress orders special meals for her staff—an expense producers don’t want to bear. There’s also been much sniggering about the quantity of fruit that is ordered on a daily basis. “No normal human being can consume that much fruit in a day. So a lot of that fruit is being packed and taken home, and a new batch is ordered the following morning,” says a source on a film unit who has witnessed this first hand.

While shooting in Versova for a big-budget action film recently, the actress is believed to have asked that lunch be ordered for her from Indigo Deli daily. The producer was not pleased about having to shell out approximately Rs 8,000 per day on this.