What They Don’t Teach You at Harvard 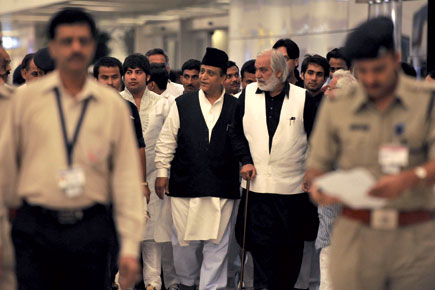 
Western world academia seems to have a few pet subjects about India that fit in with its image of the snake charmer riding a Harley Davidson. The dabbawallas of Mumbai, for instance, who they gave something called a ‘six sigma’ reliability rating: less than 3.4 errors every million deliveries. Those who have used the service, like me, will tell you that there are the odd days when someone else’s dabba lands up or it doesn’t reach at all. It is not a regular feature, but it is also not something which happens all that rarely.

The Kumbh Mela is another of these subjects. When it was underway in Allahabad recently, a Harvard University team came to study the financial and administrative aspects of the festival. They spent 20 odd days there and in turn invited Uttar Pradesh Chief Minister Akhilesh Yadav to Harvard to deliver a talk on organising the Mela. He was accompanied by Samajwadi Party leader Azam Khan, UP’s minister in-charge of the Kumbh Mela Organising Committee. Khan had resigned during the Kumbh after a stampede at Allahabad railway station that left 36 pilgrims dead. His resignation was rejected by the CM. Khan accepted the CM’s rejection and blamed the media. Recently, The Hindu had an article which reported that no one had bothered to clean up the Sangam after the Kumbh was over. It quoted a sadhu saying that the UP administration had deserted them. This could have been one of Khan’s lessons for Harvard: you don’t need to resign for not doing anything.

As it turned out, Khan never made it to the pulpits of Harvard. He boycotted it in protest after he was called aside for questioning by security officials at Boston’s Logan airport. He was upset at being the only one of a group that included the CM and other government officials to be so treated. He ascribed it to his name and religion. He created a scene, and the brush-off he got from the security officer probably aggravated his mood.

But he probably had just cause in feeling angry. Racial profiling is banned by the US, but since 9/11 there is overwhelming anecdotal evidence that Muslims get singled out at airports. A 2011 poll of 1,033 Muslim Americans by the US thinktank Pew Research Center found that 21 per cent of them had the experience of ‘being singled out by airport security’. For Muslims arriving from abroad, especially Asia, the figure would likely be higher.

It is Khan’s reaction that could be another Harvard case study. In sequence, this was what he did:

» Blame the Indian Government for not pre-empting it

» Accuse Salman Khurshid, India’s External Affairs Minister, of arranging the humiliation in collusion with whoever in the US

» Use the humiliation as a prop to bolster his image as a Muslim leader.

In the peculiar world of Indian politics, Azam Khan could succeed in turning adversity into opportunity. It is absurd to think that Khurshid can ‘arrange’ something like this in a country that even frisks former Indian presidents like Abdul Kalam. But given that most Indians only know Indian culture, Khan may manage to score some points with his Muslim supporters in Uttar Pradesh.

On 30 April, The Indian Express broke another story about Khan’s US jaunt. This was set in Delhi airport on his way to the US. A Samajwadi Party MP who is Muslim had come to see him but was not let into the VVIP lounge. Khan created a ruckus and stormed out of the lounge in protest, calling it discrimination against Muslims. Security officials immediately apologised and invited both of them inside. It was with this experience of airport security that he landed in Boston and found an entirely different set of norms in operation.

It takes ingenuity to connect these two episodes and then drag India’s External Affairs Minister into it to construct a grand conspiracy theory. This, not his Kumbh management, is what Harvard should learn from Khan.