As humans, we are wired to be restless, to succumb to wanderlust, to struggle with Fernweh (far-sickness) as opposed to Heimweh (homesickness) 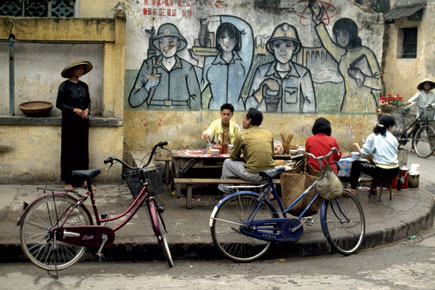 My mother-in-law's friend K is the worst kind of travel braggart I know. No sooner is she back from one holiday, than she’s planning the next. She’s of the done-this-done-that variety of tourist. Her manner of encouraging you to visit a place goes something like: “Oh, you must do Burma before it opens up! You must do Cuba before the Americans arrive.” She speaks of countries as if they were maidens on the verge of blossoming, and she, a gnarly sea captain. It’s crass and colonial in its manner of conquest- speak, and yet, many of us have been there, haven’t we? Holding forth in sitting rooms and boudoirs as though we had descended from a great lineage of adventurers—Marco Polo, Ibn Battuta, Steve Irwin. We speak of our escapades as if they weren’t just unique to us but had some special significance to the world. We hope between home and the great elsewhere, we’ll see, encounter, hear something that will change and enrich us. And, surely, part of the reason we travel at all is so that we can tell about it later?

The idea of recreational travel, like the idea of the 18-year- long childhood, is a fairly modern construct. In the past, humans ordered their lives into days of leisure and days of work. They knew to stow away their ploughs for feast days, weddings and the like, but the need to physically up and go somewhere in order to feel rejuvenated wasn’t a practical option. There were pilgrims, of course, and pioneers, and in Europe of the 1600s a large number of men in frilly collars and breeches set out on Le Grand Tour, but this was strictly the domain of the elite. It was only in the early 19th century that travel became associated with vacation, and became available to a larger swathe of the population. Then came the Industrial Revolution and EasyJet, ushering us into the current age of timeshares, Airbnb and the package holiday.

I boarded my first aeroplane when I was six months old. My first solo train ride was when I was four (okay, the neighbour auntie was with me, but she has been obliterated in the memory). I have performed headstands in all seven continents and spent any extra money I’ve ever made collecting animal souvenirs and ethnic jackets from remote hill tribes. Up until a few months ago, if you’d asked me to describe myself, I surely would have called myself a ‘traveller’. But then I made a fatal mistake. I went on holiday. I went to a country I had no business being in. No literary festival, no dance performance, no journalistic assignment, no friend’s couch to sleep on. I was going simply because I was curious. And all of a sudden, from traveller, I became tourist. I joined the tribe of people who carry selfie sticks and wear sweatpants with the word ‘juicy’ scrawled across their backsides, which led me to a serious spiritual crisis.

When I arrived in Hanoi a month ago with my husband and a dear Canadian friend, I was rosy-cheeked with anticipation. I withdrew $100 of local currency from the ATM at the airport and was instantly a millionaire ($100=2,159,000 dong). I had prepared little for the trip, my mind filled only with scenes from American war movies and Graham Greene’s The Quiet American. You want countries to surprise you, after all, to steer clear of the stereotypes the world prescribes for them. “What’s the bet we’re not going to see anyone wearing those conical paddy hats?” I said as we got in a taxi. And two seconds later, within spitting distance of the airport, we saw scores of Vietnamese on their bicycles and in the median of the road, gardening, all wearing conical paddy hats.

In the capital we visited Ho Chi Minh’s mausoleum and marvelled at the Russian embalming technology that had preserved his snowy-white beard and hair. We spent two nights on a schooner in Ha Long Bay, traipsed through imperial cities, and even witnessed a pig-killing in a commune. Still, after two weeks of traversing the country’s narrow shank, I felt I hadn’t had a single authentic experience. And the need for it was eroding me. I was seeing beautiful things, eating cheaply and bountifully, discovering fun facts every day. Who would have thought, for instance, that Vietnam was the largest exporter of coffee in the world when the local brew tasted so dreadfully of sawdust laced with cheap chocolate? Something wasn’t right. Everywhere we went, we saw other people who had had the same idea as us. Other tourists, I mean. And while this started out as only slightly depressing, it soon expanded to full-blown terror.

“We’re not like them,” we kept telling our guide. But regardless, he’d drop us in a hangar surrounded by tour buses, and go off to have tea while we were unleashed among acres and acres of Vietnamese kitsch with tiny, persistent sales girls shoving stuff in our faces, until, “Lady, nothing you say is going to make me want to buy six lacquer bowls so I can get the seventh for free, so quit it!” A meanness of spirit descends. And later, in the hotel room—further depression. Looking at my husband’s photographs—not of mountains or monuments, but of tourists, captured a la Martin Parr—sloppy, bumbling, T-shirt clad, belching, grotesque. And to recognise my friend and I as part of that herd, holding up a gargantuan papier-mâché crocodile (too big for my animal collection), our jaws wide open like the croc’s, doing that stupid thing tourists do everywhere: Look! I’m not myself. I’m on holiday, thereby within my rights to be ridiculous!

Wherever we went we tried to keep away from other tourists, but inevitably we’d get hustled into yet another shopping hangar full of kitsch. In the northern mountains of Sapa, we told our trekking guide, a 22-year-old Hmong woman nicknamed Ninni, that we categorically did not want to go where other tourists went. She looked at us and said, “Funny, all tourists say that!” It was the simplicity with which she said it, the bluntness. Shining a beam of light directly on our petty desire to be unique. Surely the phrase ‘off the beaten path’ has got to be the most obnoxious phrase in any guide book, a chintzy version of Robert Frost’s The Road Not Taken. For there we were—pillaging the countryside for a road not taken, wanting desperately to be trailblazers, briefly believing we were, until a red baseball cap bounced into peripheral vision, dashing our fantasy to the ground.

There are as many ways of travelling as there are portals in Minecraft, but the line between the traveller and the tourist in the 21st century is a thin red one. Who’s to say whether it pays to be intrepid or socially conscious? Whether it matters if you speak the local language? If the long-term solo traveller can really hold moral ground over the package group traveller? Wouldn’t it be better to be like my mother-in-law’s friend K, who suffers none of the voyeur’s guilt and has no delusions about why she travels? Ho Chi Minh mausoleum? Check. Cu Chi tunnels? Check. Ao-dai silk tunic made by overpriced tailor in the warrens of Hoi An? Check.

As humans, we are wired to be restless, to succumb to wanderlust, to struggle with Fernweh (far-sickness) as opposed to Heimweh (homesickness). Bruce Chatwin described it gorgeously in Anatomy of Restlessness, ‘In one of his gloomier moments Pascal said that all man’s unhappiness stemmed from a single cause, his inability to remain quietly in a single room. ‘Notre nature,’ he wrote… Diversion. Distraction. Fantasy. Change of fashion, food, love and landscape. We need them as the air we breathe. Without change our brains and bodies rot. The man who sits quietly in a shuttered room is likely to be mad, tortured by hallucinations and introspection.’

Scientists have since pinned this restlessness down to a particular dopamine-seeking gene—DRD4-7R, which combined with our large brains and long limbs explains why we are the most curious earthly species that has ever lived. To move is an innately human need. And yet, how are we to be explorers when the golden age of exploration is long gone? Nowadays you’d need to be on a Mars Mission to venture into ‘Here be Dragons’ or ‘Hic Svnt Leones’ territory, because everything else has been Google-mapped, Trip-advised, Face-booked.

And so gradually I began to daydream about that shuttered room. Towards the end of the holiday, on a small beach, I refused to leave the hotel room, opting instead to sit in bed and read War and Peace; to be led by Leo Tolstoy from ballroom to battlefield, through scenes of death and philosophical meanderings on the great unimportance of everything, trying all the while to keep my Rostovs, Bezukhovs and Kuragins straight. The outside world hissed to nothing while my Kindle-o-meter progressed slowly—one per cent every fourteen-and-a-half minutes. And there it was: my first authentic experience of the trip. Something blissful and original and all mine.

In her poem, Questions of Travel, Elizabeth Bishop asks: ‘Should we have stayed at home and thought of here?… What childishness is it that while there’s a breath of life/ in our bodies, we are determined to rush/ to see the sun the other way around?’ Or consider Goethe: ‘You don’t have to travel around the world to understand that the sky is blue everywhere.’ And yet, Goethe gadded about aplenty, and the only thing that could make Elizabeth Bishop stay put was she’d broken a limb after a vodka binge. Do we travel to expand our imaginations or do we travel because of our imaginations?

I write this in a friend’s cottage in Himachal Pradesh. (I know, Dear Reader, the irony isn’t lost on me. To the outside eye, my life is a constant vacation. But this is the prerogative of the self- employed, free-loading writer). While I’m here, I intend to do nothing but read, write, walk, and catch up on Game of Thrones. Every day, I wake to the same reassuring view—of a ring of mountains choked with pine forests of a green I thought was extinct. Monkeys prance along the balcony railings and a marching band practises in a distant valley. I’ve found no cure for my traveller’s spiritual crisis except to understand that there should be durations of stillness and durations of movement in life.

I prefer to think of myself as a traveller rather than a tourist simply because it offers me a greater sense of purpose. The tourist’s reason for moving is to relax from a daily life, which provides her a provident fund and the glories of a Saturday night. The traveller has lost all certainties except for the inconsistent pleasures of a life of journeys.