The Story of Their Experiments with Truth 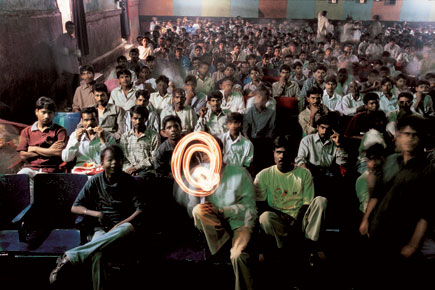 
If you got to a multiplex in Mumbai, then you will soon get acquainted with Devendra Khandelwal. He makes the public service films that are aired before the movie starts. You will remember these clips forever because of the absolute absence of drama in them. It’s easy to produce a bad work of art, but to make something devoid of art is talent. For example, in Khandelwal’s film, there will be a man throwing garbage on the streets and someone will tell him not to. That’s it. It is so bland that it could be farce.

Khandelwal is not the only man to assault your senses when all you want to do is watch a movie. There are several short messages on tobacco consumption. These are an antithesis to the Khandelwal fare. Here, a piece of sponge is wrung and black liquid comes out of it with a voiceover saying that if you are a smoker, this is your lung. Another film has a cancer patient with a tube attached to his face regretting the tobacco he chewed, and later, a line on screen tells you he died in 2009.

Recently, for five days, without the consent of anyone who buys tickets, 200 theatres agreed to air a one-minute montage of Bal Thackeray. It was to mark his birth anniversary. There was nothing special about the number. It was not his 100th anniversary or 75th anniversary. If he had been alive, he would be 87. The one-minute fleeting memorial had been thrust on the theatre owners by a Shiv Sena affiliated union, Bharatiya Chitrapat Sena. The montage tells you that you are in Thackeray’s debt for what he did for Maharashtra. Unlike Khandelwal’s movies, it has some production values, like fade-ins, fade-outs, a background ditty of piano keys. If you don’t consider yourself in Thackeray’s everlasting debt, it’s rather pointless to show you all this. The Bharatiya Chitrapat Sena’s name appears in the credits at the end. There are also images of Uddhav Thackeray. This is good free advertisement, yet another avatar of the extortion that the Sena has made such an art out of.

In addition to Khandelwal, tobacco consumption, the Thackeray montage, a man who buys a ticket also has to see commercials and stand up when the national anthem is sung. The anthem was forced onto Mumbai’s theatres 10 years ago. Some have been stupid enough to be brave and not stand in attention. Random strangers have pilloried them and then put up Facebook updates of how they taught the traitor a lesson. After a decade of such conditioning, even those who know that it is absurd stand up. You can spot them by how they fiddle with their phones or munch something.

Note that when something stupid is couched under the label of ‘patriotism’, how easily it is swallowed. When a Shiv Sainik says ‘My view of the world must be your view of the world’, secularists find it offensive. But many of them would also find it offensive if someone told them ‘Your patriotism is not my patriotism’. Or that patriotism is just another form of superstition because it’s blind. It’s a tool to brainwash the citizen to make him feel that he is relentlessly in debt to the country. And as an individual, he must suffer for this abstract idea—the ‘nation’.

This is also the force at work that makes the 10 minutes before a movie not his own, but of arbitrary agencies seeking to coerce their agendas onto his consciousness. Take the tobacco consumption clip. It is good that it is shown. But then there’s this question: why tobacco consumption? Why not any of the hundreds of other social evils. Film stars smoke on screen and set a bad example. But they also race cars, so why not have a short message on the dangers of rash driving with a mutilated accident victim? Women are raped in movies. Why not a short message on the advisability of not raping?

Is there a measure by which there is a list of priorities to decide what is shown? If there is, then what makes the national anthem and tobacco clip head the queue? Shouldn’t there at least be a shuffling of order once in a while? Tobacco for two months, then alcohol, then rape, a one-minute montage for one political party each month. There is really no logic by which these experiments are done on you to make you a model citizen. The loudest voice owns your attention.