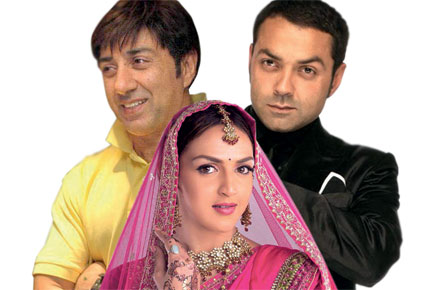 
It so happens that Arbaaz Khan has already begun thinking about Dabangg 3. The actor-producer, who’s currently directing Dabangg 2, after the first film’s director Abhinav Kashyap decided he didn’t want to helm the sequel, has reportedly spoken with Abhinav about returning for the third film. And Abhinav has apparently decided to wait and see what Arbaaz “does with my brand” before committing himself to direct the third film.

Abhinav and Arbaaz famously fell out during the making of Dabangg, when the latter and his superstar brother Salman Khan allegedly didn’t allow Abhinav to direct the action scenes of the film, choosing to shoot them their own way. Abhinav was reportedly not on the sets when Salman and Arbaaz canned the film’s now legendary fight sequences. According to insiders, Abhinav had a very different vision for the action portions, and found himself left out in the cold when he refused to shoot them the way the Khans wanted.

To add insult to injury, he was left to incorporate these sequences in the final edit despite never being satisfied with them. No wonder Abhinav and Arbaaz were barely on talking terms when the film released, and had a fairly public falling out soon after. They did, however, patch up subsequently.

Meanwhile, moving on from the Dabangg drama, Abhinav will direct Ranbir Kapoor in Besharam, which goes on the floors shortly. And contrary to stories doing the rounds that Ishaqzaade star Parineeti Chopra will star opposite Ranbir in the film, one hears that Abhinav has, in fact, zeroed in on a newcomer to play the leading lady of the film, after auditioning more than a dozen actresses (both established and new) for the part.

Expectedly, Sunny Deol and Bobby Deol were conspicuous by their absence at halfsister Esha Deol’s wedding celebrations in Mumbai last week. Dharmendra’s strapping sons have always been awkward about discussing their father’s ‘other family’ or even acknowledging them in public.

Although industry insiders say Sunny and Bobby share warm, cordial relations with Esha and her younger sister Ahaana, there have been no public appearances together in all these years. However, making up for their absence at Esha’s wedding was cousin Abhay Deol, who showed up for every ceremony with his girlfriend Preeti Desai, and who reportedly performed all ‘brotherly duties’.

Things apparently got a little awkward last Saturday at the reception, when television crews covering the event asked papa Dharmendra why his sons had decided to give the shaadi a skip. The fiery Jat first tried to pretend that he hadn’t heard the question, but when reporters persisted, he lost his cool. “It’s a happy occasion, and I wish you’d let me be happy,” he snapped, pointing a threatening finger at the journo who had dared to ask the offending question. “Aur ab aap apna bakwaas band kijiye,” he demanded, before storming off in a huff.

It’s no secret that this actress dumped her actor boyfriend when she found out that he’d been fooling around behind her back—not only with a pretty co-star of his, but also with another hot actress he reportedly hooked up with during an overseas awards ceremony weekend. The couple is now back together, after an exchange of many promises of loyalty and fidelity.

According to sources close to the couple, their relationship survived another major speed-bump not so long ago, when the boyfriend discovered the actress had been up to shenanigans of her own while they were supposedly together. Story goes that he discovered a series of ‘overfriendly’ SMS exchanges with another actor—one she’d worked with previously, and who was at the time single after a fresh break-up. In fact, there are eyewitnesses who claim to have seen the actress get very cozy with the said co-star at the housewarming ceremony of a third actor. But both stars denied the ‘stories’ vehemently, insisting they were merely ‘good friends’.

The actress and her actor boyfriend, who are together currently and don’t bother hiding it anymore, have allegedly sworn to stay faithful to each other hereon. “But cheaters will remain cheaters,” says another A-list actress, insisting that none of their friends believe either can remain monogamous too long. Ouch.