The Power of Egolessness 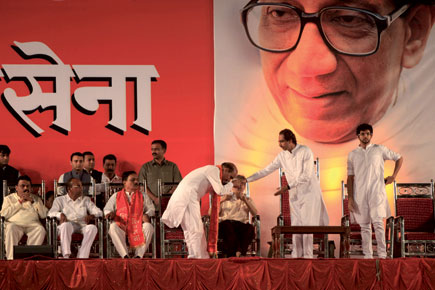 
Manohar Joshi, who was once so key to the Shiv Sena that they made him their first Chief Minister in Maharashtra and their first Speaker in the Lok Sabha, is now enduring serial humiliation from the very same party.

There is no doubt that he asked for it. Upset at the possibility of being denied a ticket for the coming General Election, Joshi criticised party chief Uddhav Thackeray. At a function, he commented that Bal Thackeray’s memorial would have come up already if Bal Thackeray was alive; the silent corollary being that the son doesn’t have the father’s guts or cunning to blackmail governments.

Joshi then went into damage control mode with “I was misquoted” and regrets. It didn’t help. He was booed away from the Sena’s Dussehra rally, an event for which he turned up uninvited. He then went uninvited to Thackeray’s residence on Diwali and barely managed to get an audience. There was the sorry spectacle of him telling the media that extensive discussions would be done some other day, which means he is going to shamelessly continue popping in on Thackeray.

A dispassionate observer with middle-class values would take a lesson from all this about the vagaries of time and the transitory nature of power. He would cringe at how someone getting so humiliated could have so little self-respect as to repeatedly knock on the same door that repeatedly bangs shut in his face. Surely even fallen men must retain some honour, especially someone like Joshi who has done rather well for himself in his old age—Kohinoor used to be the name of his coaching class, now it is a brand that flashes from a really tall skyscraper in a really expensive location in Dadar. You have a couple of hundred crore right there in public view; the private hoard is anyone’s guess. Joshi, our petty bourgeoise would infer, is a man who deserves his humiliation. But this middle-class person would be completely wrong, because he does not understand the one great characteristic of the true politician—the absolute absence of ego in the face of political necessity.

Ego, as we know, is a person’s sense of self. It is the image of ourselves that we carry and relentlessly try to live up to. It is not necessarily a good thing, because betwixt image and reality is circumstance. Human beings are designed ugly at their cores. Your next door neighbour will teach his child not to lie, but during a communal riot, he could just as easily participate in a butchering. Under ordinary conditions however, he is bound by his values to keep his image of himself intact.

People with malleable egos are less fettered by shame or guilt, and are often more successful. Dhirubhai Ambani used to say he had no problem doing a salaam to anyone if it got his work done. Spiritual progress too is a gradual effacement of the ego, but given the danger of egolessness, organised religions are—in principle at least—accompanied by a code of ethics.

Successful politicians, on the other hand, have a schizophrenic relationship with the ego—either they exercise it in full measure or they shed it completely. As Union Home Minister, Sushil Kumar Shinde will have no qualms destroying the career of any policeman who irritates him, but he will also have no shame getting on his knees before Sonia Gandhi to prove his loyalty. And, if you look at his career path, this has worked for him. As it has for Manohar Joshi.

Joshi will continue to humiliate himself because he has vast experience doing so; that is the road to success for a politician. It is also why it will not be surprising if he does manage to survive in some form.

A common man will not understand this because he has never had the ambition or ability to taste the kind of power that Joshi has enjoyed. If you could be master of a million by being slave to one, most people would. Only, they don’t get that choice.