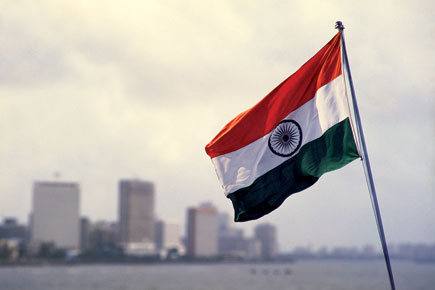 
Deepali Issar, you who are the wife of actor-director Puneet Issar, and now relishing the snug reassurance of having done something of consequence because you hit a man on his head, ponder awhile on the causes and consequences of your action. You hit him because he wouldn’t stand for the national anthem inside a movie hall in Mumbai, and after this show of violence, directly antithetical to this country’s founding principle of non-violent agitation, you were supported and encouraged by other fools in the audience. You think what you did was a service to the nation. You did not serve anything except your convoluted sense of virtue.

What you ably showed was how easy it is to get a retinue in the name of king and country. This, in a more vitriolic form, is the tool of politicians. For example, before Narendra Modi’s national ambitions started to bear fruit, he relentlessly parroted the ‘asmita of Gujarat’, using this precise emotion as a shield against accusations of fomenting communal violence. As Raj Thackeray speaks about the greatness of Maharashtra, his party’s men attack taxi drivers. Much before them, there was Hitler and Mussolini who used the nation as the supreme ideal to dress up the politics of racism and mass murder. You are not in that league and far removed from those vocations. But understand that patriotism, which you hold in such high esteem, is not necessarily noble, and exaggerated displays of it are suspicious.

Do you question why it is only in Maharashtra that men and women are made to listen to the national anthem when they go to see a movie? Did the legislators who imposed this have no faith in its people that they sought relentless reaffirmation of their patriotism? When you stood up for the national anthem in that theatre, were you not being forced to announce your patriotism at a timing chosen by someone else? You acceded to that coercion. Therefore ask this: are you a patriot or a puppet?

You were, as it turned out, not merely a puppet. You were a puppet who wanted to create another puppet of the man who refused to stand up for the anthem. That he was not an Indian was just your bad luck. That when revealed this you should tell him he was lying because he looked Indian was plain intimidation. He, as we know now, is an Australian of Indian origin. So, let us lean back and consider what exactly it is that you have done—you assaulted an Australian because he didn’t exhibit his patriotism… towards India.

How is it that moral rectitude only comes with such blazing fury for something so inconsequential? Your husband has directed a movie with Salman Khan, who, it is alleged, ran over pavement dwellers while driving drunk. Did you whack your husband on the head for casting him? Did you whack Salman if he ever came to your home? Or the hundred other injustices that you must have observed in the course of your low-tempered life. Take a walk on the street below and count the number of illegal constructions or child labourers. Did you keep on whacking people on the head or did you just swallow all of that as the daily grind of existence? What is it about a man sitting in a movie hall that made it so imperative for self-righteousness to assert itself? It is the licence that comes with labels like ‘patriotism’.

There are many things for you to ruminate over. Begin with what your victim, the Australian, must be thinking of you and your country now. He was an ordinary man on an ordinary day on an ordinary outing, suddenly assaulted by a screeching woman egged on by a hysterical crowd. That is the image he carries back with him and it is not false.

Wholesome actions are those that make not just you but the environment joyous. They add to the storehouse of happiness. Miserable people, on the other hand, instinctively spread their misery to others. In that movie hall, what do you think was happening?